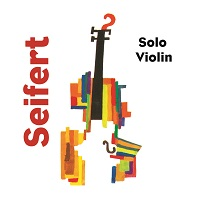 In April 1974, a year after the break-up of Tomasz Stanko's first great quintet, Zbigniew Seifert gave his first solo violin concert. Another solo gig, two years later, produced the LP Solo Violin (EMI, 1978), which, thanks to the tireless efforts of the Zbigniew Seifert Foundation to promote Seifert's legacy, once more finds its way onto CD after years out of print. Following the simultaneous release of Variospheres (Zbigniew Seifert Foundation, 2017)—an exhilarating live recording of Seifert's short-lived, one-tour quartet—the publication in English of Aneta Norek-Skrycka's biography Man of the Light: The Life and Music of Zbigniew Seifert (2016) and the success of the biennial Zbigniew Seifert International Violin Competition, Solo Violin marks another milestone in the resurgence of interest in the great Polish violinist.

That this concert took place at all was due to the late cancellation of guitarists Toto Blanke and Hans Reichel, with Seifert stepping in at late notice. The concert, recorded by Radio Bremen at the city's Post-Aula, was part of a concert series to celebrate the two-hundredth anniversary of America's independence. According to concert producer Volker Steppat, the series was intended to celebrate jazz and blues, but what emerges most strongly in Seifert's playing is his own highly personalized idiom, albeit one shaped by the influence of John Coltrane.

Even the most casual listener to these four, largely-improvised tracks will recognize Seifert's outstanding technical facility that impressed audiences and musical peers alike. Yet, beneath the fleet-fingered wizardry, of which there's no shortage on this set, lies an emotional depth that imbues Seifert's playing with a poetic quality, particularly on the haunting, almost flute-like intro to "Confessions," which gives way to a melancholy folkloric lyricism of Eastern European hue. Even when consumed in rushes of ecstatic free-jazz there's a yearning inside Seifert's passion that evokes the keening spiritualism of Coltrane.

The Coltrane comparison was arguably both a compliment and a millstone that followed Seifert throughout his short life, and the saxophonist's shadow looms largest on the epic, sixteen-minute "Kind of Time," where Seifert uncorks a seemingly endless stream of ideas. Here, Seifert adds a looped five-note motif that serves as a rhythmic reference point for his acrobatic improvised flights. There is, however, a pronounced sense of narrative-flow underpinning Seifert's play—the improviser as composer—that unfolds with equal measures of control, fire and elegance.

Seifert's admirable capacity to marry lyricism and soaring release is nowhere better heard than on "Birds," a highly impressionistic, virtuoso tour-de-force. The layered drone over which Seifert spreads his wings lends a hint of Carnatic classicism to this mesmerizing twelve-minute adventure, though to try to pick the threads of the violinist's colorful weave is no easy task, so tightly entwined are the various classical, folkloric, and avant-garde elements.

The concert finishes with "Evening Psalm," the shortest number by some way at just under six minutes. The striking head bookends a continual call-and response between recurring motif and dashing improvisational exclamations. You get the impression that he could have gone on ad infinitum, but the classically-trained Seifert knew only too well when a symphony had climaxed.

Forty years after its initial vinyl release Solo Violin remains a classic of solo virtuosity and offers dramatic testimony to one of Europe's most extraordinarily gifted jazz musicians.