BY MIKE JURKOVIC
August 9, 2018
Sign in to view read count 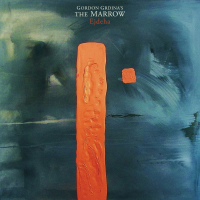 Expanding out from his debut, Think Like the Waves (Songlines, 2006), recorded with Gary Peacock and Paul Motian, Grdina takes his jazz improvisations further into the poetic exoticism of the Middle East. "Telesm" pulls the veil back on Ejdeha, as The Marrow—bassist Mark Helias, cellist Hank Roberts, and Hamin Honari, playing the tombak (a goblet shaped drum) and daf (frame drum)—draws the music out from the desert shadows.

The rhythmic counterpoint of "Idiolect" evolves from these persistent shadows into a frenetic chase. Helias' dark bass and Grdina's assured, hypnotic picking being the engine around which the others conjure. The title track finds Roberts the featured dancer, with Honari's percussive dynamics and reverberations holding ground.

Throughout, Grdina's oud lingers on the palette ("Full Circle"), despite the instrument's natural inclination for the notes to fade soon after they are played. Ejdeha, Kurdish for dragon, is a compelling work of contemporary and ancient telepathy, a sure sign that humans can talk to each other.