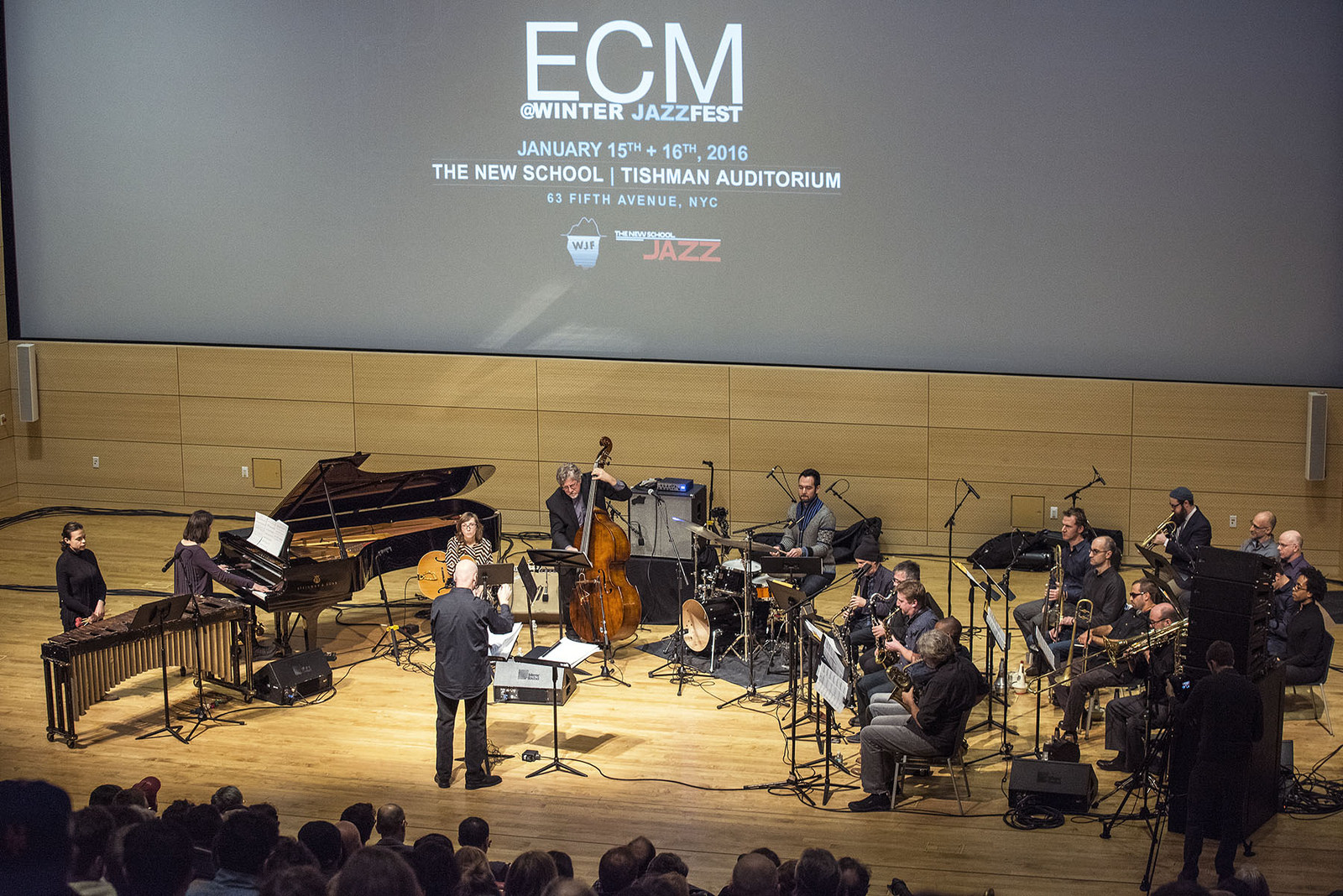 There's a very modern feel at the Tishman Auditorium at The New School University Center, the site for a two-night showcase for ECM Records at the 2016 Winter Jazzfest—with the Escher-esque stairs that you pass on the way in, the broad, open space of the stage, its huge screen backdrop, and the light blonde bamboo walls. You might think you were smack in the middle of an urban setting in central Europe instead of a block away from Union Square in Manhattan. The setting gave an appropriate flavor for a showcase of artists on the record label founded almost 50 years ago in Munich by Manfred Eicher under an abbreviation for "Edition of Contemporary Music." While artists on the label span an international range, the ECM musicians featured at the Winter Jazzfest were from its U.S. roster, many based in New York. They didn't seem picked out as a matter of convenience; it was a stellar group. At the outset of the first night, Sarah Humphries, ECM Vice President and emcee for the two shows, shared a quote—with a mix of pride and irony—from some advance notice about the concerts that appeared in Time Out New York : "The ECM Records Stage will be all the rage as it trots out visionaries galore culled from its jaw-dropping roster." Maybe a little hyperbole there, but not much—both nights were full of great music that fit perfectly in the edgy sensibility of the Winter Jazzfest.

The groupings of musicians were fairly traditional for the most part—quartets and quintets, with a trumpet and/or sax out in front of a rhythm section, along with trios and solo spots. All the music was from recently released or forthcoming ECM albums. Michael Formanek's Ensemble Kolossus was the largest group, which executed a performance that was a special standout of the two nights. It's a big group—18 pieces—but despite the monstrous-sounding name, has a conventional big band instrumentation, with plenty of doubling by the reeds and an added vibraphone. The music went well beyond the big band convention, though, presenting Formanek's richly textured compositions that brought Maria Schneider's work to mind (and maybe a bit of Charles Mingus and Duke Ellington), along with improvisational turns from the band that showed considerable depth and imagination, including especially impressive work by trumpeter Ralph Alessi, saxophonist Brian Settles, and trombonist Ben Gerstein. Mark Helias took on the conducting duties, taking occasional cues himself from Formanek, who stood directly across from him, center stage, and whose bass playing took on prominent role in the ensemble. The compositions presented were all from The Distance, an album scheduled for release in February 2016, which includes the title track (the closer for the set) and the multiple movements of Formanek's "Exoskeleton."

The Chris Potter Quartet performed new compositions by its leader, so new, he claimed, that most were yet to be named. The opener took on a slightly unusual form, beginning with Potter's stated melodic theme on tenor sax, followed by David Virelles' piano solo, and then a restatement of the theme by Potter, his wide ranging improvisation, including an improbable (but still fitting) quote from Burt Bacharach's "Wives and Lovers" and a climactic foray into the saxophone's altissimo range, interspersed with different composed themes within the piece, and an elegiac Coltranesque conclusion. Potter mainly played tenor sax and was also featured on soprano sax and bass clarinet. In addition to Virelles, the group included bassist Joe Martin and drummer Marcus Gilmore. Throughout, Potter displayed an assortment of influences: bits of Michael Brecker, a soulful Eddie Harris segment, some Sonny Rollins in a calypso spot, and Wayne Shorter, especially in his soprano playing. We could hear these influences in Potter's playing, but they didn't dominate his sound at all; it was as if he dabbed his paintbrush in some old masters' pallets to add color here and there within his own distinctive improvisational concepts. 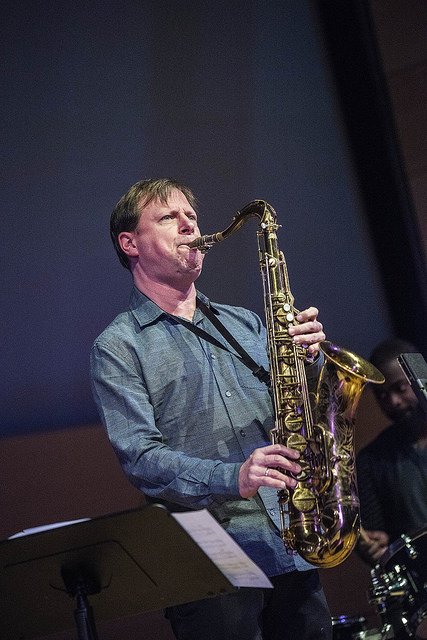 It's hugely unfair to focus here solely on Formanek and Potter. Over the course of some twelve hours of music there were many other highlights—from the opener, David Torn's solo performance on electric guitar and sundry electronics, to the closing duo of pianist Ethan Iverson and saxophonist Mark Turner in a chamber-music-like duo setting. A sampling of music we heard in between included Turner's own quartet, featuring trumpeter Avishai Cohen, kicking off with "Rock Two," a fascinating through-composed piece sprinkled with bits of improvisation; Craig Taborn's solo piano performance, including remarkable pedal effects on "Speak the Name"; a trio featuring Taborn, violist Mat Maneri, and percussionist Ches Smith, performing Smith's compositions on their just-released album The Bell; and a very powerful performance by the Vijay Iyer Trio, which packed the house.

For capsule reviews of these and the rest of the performances on the Winter Jazz Fest ECM Stage, see this article on All About Jazz by Tyran Grillo, the prodigious, insightful chronicler of all things ECM.