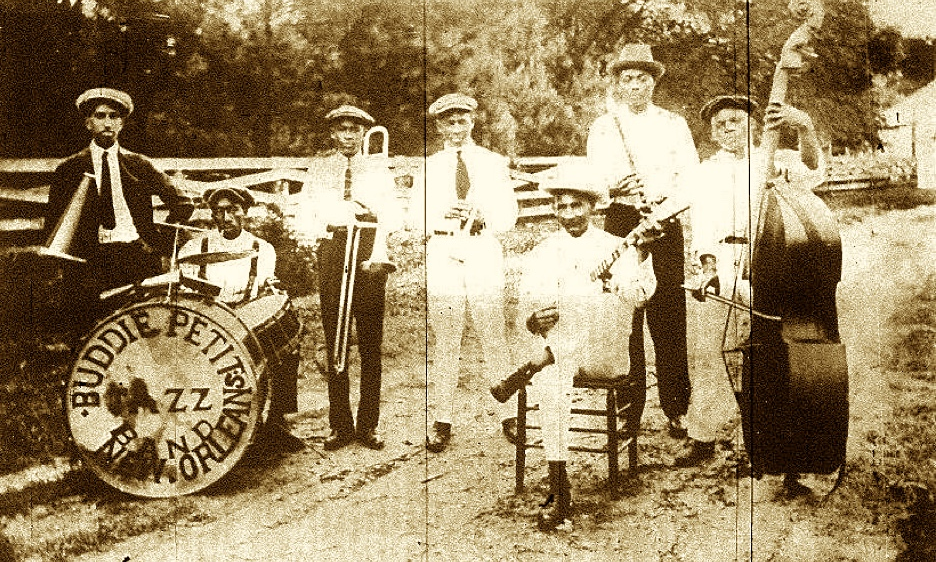 (King) Oliver’s influence on the development of Jazz cannot be overstated, even by a writer who once won an extremely prestigious award for overstatement.

This article was originally published at All About Jazz on November 12, 2018.

In 1956, while in the throes of kicking his heroin addiction and late for a gig, Miles Davis picks up a small black snake that had wandered into his Missouri home and—thinking it is just a hallucination—mistakes for a clip-on tie. He completed the gig wearing the snake, which started a trend of Jazz musicians wearing skinny black ties that continues to this day.

The Buddie Petit New Orleans Jazz Band are performing in a poorly ventilated dance hall in Metairie on a particularly languid summer's day in 1917, when the Louisiana heat and humidity become too much for the musicians and the increasingly smaller crowd. Thinking quickly, Petit takes the band outside and performs on the dirt road in the shade of a large tree. Soon, passers-by are dancing and giving tips to the band, thus marking the first time a band "went out on the road" to both further Our Music and to make some coin.

In 1927, George Washington Carver successfully synthesized the essence of pure Jazz wholly from sweet potatoes. He was his own test subject, though the results were mixed; for about 15 minutes after ingesting the elixir, he did sing nonsense syllables, as in scat, but did so to the tune of Sousa's "Washington Post" march. By June of 1928, he had perfected the potion, and administered it to Louis Armstrong. Pops immediately recorded "West End Blues" in one take. Jazz historians continue to argue whether it was Carver's tonic that was responsible for the landmark recording, or the fact that Satchmo had also smoked enough herb to give everyone south of Michigan Avenue a contact high.

While performing at Carnegie Hall in 1938, the musicians of Benny Goodman's orchestra were understandably nervous, being in such an august venue. To ease the tension, Gene Krupa opened the set by hitting every drum in his kit with unrestrained enthusiasm. That was enough to break the ice, and the band went on to perform an historic set. In Krupa's improvisation, thus was set a pattern of erratic behavior by drummers that endures even now. It should be noted that this breakthrough performance has nothing at all to do with Thelonious Monk's 1956 recording Live at the Carnegie Deli. That is a spoken word album, the highlight of which is listening to Monk try to order the hot tongue platter without giggling.

Our Leader Michael Ricci brings All About Jazz to the burgeoning Interwebs. Previous efforts at a comprehensive source for everything related to Our Music include Ricci's Jazz-A-Sketch, designed for the Etch-A-Sketch. The problem was that each page took hours to render and had to be completely erased before moving on to the next page. It also made AAJ's signature circular logo (which Ricci says 'came to me as if in a dream') virtually impossible. This was followed by All About Jazz for Hasbro's Lite Brite, which quickly fizzled out due to the lack of sufficient blue pegs for Ricci's favored color scheme. Ricci finally made it to the Web in late '94 with the short-lived site If You Don't Like Jazz Then to Hell with You, which gave way to AAJ in 1995.

In 1969, Miles Davis recorded In A Silent Way, using electric instruments and a more Rock-influenced style. This is widely viewed as the opening salvo of the Fusion movement, which has evolved into a legitimate school of Jazz. Davis was inspired to create this hybrid of Rock and Jazz when he noticed that Rock musicians in the late '60s were getting all the girls, while the ladies weren't lining up for cool, enigmatic trumpet players like they once were. Davis followed In A Silent Way with the epochal Bitches Brew, which unleashed the now-fully-formed Fusion genre and kept white musicians with Afros and corduroy pants solvent throughout the 70s. Davis is also credited with the creation of Cool Jazz while working with scientists at USC and the guy who invented the word "crunchocolatey," who were researching a cure for squareness.

Home canning enthusiasts and musicians Dizzy Gillespie and Charlie Parker found themselves in the awkward position of having more fresh blackberries than they knew what to do with one summer in the mid-40s, so they invited several of their musician friends over to help put them up in what they called a 'jam session.' It was originally called a 'jelly' session, but the name was changed to avoid any anticipated interference by Jelly Roll Morton (Morton had died in 1941, but news traveled slowly in those days). Musicians being musicians, they all brought their instruments with them and played together while waiting for the preserves to cook down. As word got out about these sessions, more and more musicians wanted to take part. Unfortunately, not all of them were of the same skill level and hindered the other more talented cooks and musicians. Gillespie and Parker began subtly ramping up the difficulty of both the jams and the improvised music to weed out the lesser sorts. They introduced complex, multi-fruit marmalades to the jam part and blistering multi-note runs with breakneck chord changes to the session part. Thus was born BeBop (the music, not the preserves. They were marketed in the Great New York metropolitan area as Bird and Diz's Jazz Jam and remained popular until the brand was bought out by Smucker's in 1985 and discontinued out of spite).

A brash young trumpeter from New Orleans (and possessor of the world's roundest head), Wynton Marsalis won a Grammy for his second album Think of One in 1983. In doing so, some writers (me, mostly) have argued that he represented a new era of popularity for traditional acoustic Jazz, which had largely lain fallow throughout the Fusion-soaked 70s (see above, in case you've forgotten it already). Marsalis would go on to become the de facto spokesman for Our Music, as well as the artistic director of the Jazz and Lincoln Center program and judge emeritus of the Pillsbury Bake-Off (he is known for his delightful blackberry popovers).

It could be argued (again, by me) that Marsalis's rise to prominence, coupled with the 1981 premiere of MTV which placed style over substance on a grand scale, drove many young Gen Xers to Our Music as they sought refuge from overhyped and undertalented pop stars who substituted dancing around in their underwear for musical ability. I'm looking at you, Madonna.

Cornet player and band leader Joe "King" Oliver moves from New Orleans to the bustling metropolis of Chicago in 1917, introducing Jazz to people outside of the Southeast for the first time. Our Music is an immediate hit and brings musicians from far and wide to the Windy City, including a young Louis Armstrong to whom Oliver was both mentor and friend. Oliver's influence on the development of Jazz cannot be overstated, even by a writer who once won an extremely prestigious award for overstatement.

Oliver would further cement his legacy when, in 1922, his Creole Jazz Band (with Pops at fullback and Lil Hardin Armstrong at center) defeated the all-white Original Dixieland Jass Band 21-17 in a match to decide the correct spelling of the word Jazz.

While working on a prototype for a human cyborg to replace stevedores, who he blamed for crushing his favorite hat when he immigrated to America in 1884, Nikola Tesla invented Buddy Bolden during his brief time in New Orleans out of parts of other deceased musicians and pieces of an early Edison phonograph. When he applied his then-novel alternating current to the creation, perhaps inspired by Mary Shelley's Frankenstein (but more likely because people were using electricity for everything in those days from lighting to dental care), he overestimated the amount of voltage necessary to animate him and left Bolden with an exaggerated sense of swing.

Though Tesla would abandon the project, in favor of an attempt to create an animatronic Nellie Melba (a popular Australian opera singer of the day, for whom peach Melba is named) for his own personal use, the Bolden-tron would pick up the cornet and become widely influential. Unfortunately, the automaton suffered from lack of maintenance and in 1907 was committed to a mental institution for insisting that he was an android which was crazy-talk in those days, as Hillary Clinton would not be invented for another 40 years. The Buddy-bot would cease functioning completely in 1931. Does this mean that Tesla could technically be credited with inventing Jazz? Why the hell not? He invented virtually everything else for which he receives minimal credit.