Javon Jackson: For You

By Patrick Burnette
November 12, 2018
Sign in to view read count 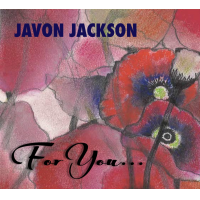 Tenor saxophonist Javon Jackson has roots stretching back to the hard-bop forebearers, having served stints with Art Blakey, Freddie Hubbard, Cedar Walton, and other luminaries of the lineage. For You is his twentieth release as a leader, and it finds him paying homage to Hubbard ("My Man Hubbard"), McCoy Tyner ("88 Strong"), Pharoah Sanders ("Mr. Sanders"—though really, the vibe is more great-quartet era of John Coltrane than Sanders), and Walton (two tunes by the pianist: "Simple Pleasure" and "Holy Land"). As the on-the-nose titles demonstrate, Jackson isn't trying to be tricky or elusive—he's spelling out his mainstream stance in capital letters. If the album had a thesis, it would be: "They do make them like that anymore."

Jackson's playing is direct but rarely declamatory—he attacks his lines with a slight obliqueness, the envelope around each note just a bit impressionistic. He's not a Paul Gonsalves disciple, but his articulation leans more in that direction than, say, Sonny Rollins. As a technician he is solid but not overwhelming—Jackson doesn't fear the occasional slight fumble as long as the expressivity is there. His band is warm and flexible, though in some stylistic tributes they sometimes imitate their models with uncomfortable fidelity ("Mr. Sanders" is so close to the classic Coltrane quartet rhythm section sound that Elvin Jones and company could sue, though Jackson himself is not in thrall to Tranisms). Pianist Jeremy Manasia is the other featured soloist, and he ranges well beyond McCoy Tyner's model on most of the outing, though it might be difficult to pick him out of a crowd of other mainstream pianists.

What elevates the session above the average run of modern mainstream jazz is atmosphere and emotional commitment. The institutionalization of jazz instruction means that hundreds of musicians can produce competent music in this genre, but only a few are able to present it with the conviction Jackson displays on For You. Jackson isn't just competent in the idiom—he's committed to it and, by the sound of things, fulfilled by it. Pacing helps—the album's ten performances mostly fall in the five-minute range and the whole package wraps up in just over fifty minutes, well before eyes start to glaze. And Jackson touches on enough different landmarks of the post-bop mainstream that he never gets stuck in just one bag.

No one is going to argue that this album is groundbreaking or state of the art stuff. It's just a solid collection of solidly performed tunes with that extra spark that holds the attention, and it will likely be just as enjoyable to listen to forty years from now as it is today.