Johnny Mandel Featuring Sherrie Maricle and the Diva Jazz Orchestra: The Man and His Music: Johnny Mandel Conducts the Music of Mandel 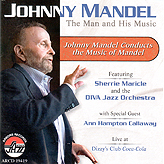 In May, 2010, legendary composer/arranger Johnny Mandel performed three evenings with the all-female DIVA Jazz Orchestra at Dizzy's Club Coca-Cola, immaculately preserved in this release. In this rare appearance in his native Manhattan, the Los Angeles-based Mandel returned decidedly to his big band roots, which included service in brass sections, more than five decades ago, with Jimmy Dorsey, Buddy Rich and Count Basie, amongst others. He also demonstrates that his musical genius remains undiminished, engaging in genial musical descriptions between all the tracks.

Mandel launches the program with his "Low Life," a swinger he contributed to the mid-1950's Basie ensemble, featuring guitarist Sheryl Bailey, trumpeter Jami Dauber, and a tenor sax exchange between Janelle Reichman and Leigh Pilzer. "Close Enough for Love," from the 1978 film Agatha, presents Reichman on clarinet, followed by 1949's "Not Really the Blues," Mandel's lone contribution to Woody Herman's Second Herd, with Reichman recreating Herman's clarinet solo. The lovely "Emily," from the 1964 film The Americanization of Emily, is a perfect example of Mandel's impressionistic scoring, with brief, unimprovised solos by pianist Tomiko Ohno, flutist Lynn Gruenewald, and lead trombonist Deborah Weisz.

"Black Nightgown" is one of two selections from 1958's I Want to Live!, on which Mandel debuted as a film composer, spotlighting lead altoist Sharel Cassity, trumpeter Christine Fawson, and trombonist Sara Jacovino. On the film's "Theme," baritonist Nicki and Lisa Parrott, Weisz, and bassist Noriko Ueda are heard in the respective positions of Gerry Mulligan, Frank Rosolino, and Red Mitchell, from the original soundtrack.

The "Theme from M*A*S*H," which Mandel insists he composed as a throwaway for the original 1970 film but became one of his most lucrative compositions due to the long-running television series which followed, appears in a Latin-rhythmed update. Mandel's other long-term royalty generator, "The Shadow of Your Smile," from 1965's The Sandpiper) brings Nadje Noordhuis's flugelhorn to center stage. Cassity returns to the solo spotlight with 1967's "Cinnamon and Clove," originally a samba-flavored hit for Sergio Mendes.

Originally composed by the late drummer Tiny Kahn (another of Mandel's '40s/'50s colleagues), "TNT" takes the entire program out with a resounding bang, featuring virtually every member of the band.

Vocalist Ann Hampton Callaway adds her note-perfect, pure alto voice to Mandel's arrangements of the Billie Holiday classics "What a Little Moonlight Can Do" and "'T'Ain't Nobody's Business," in addition to providing her own piano accompaniment to the ballad "Where Do You Start?," on which Mandel collaborated with lyricists Marilyn and Alan Bergman.

A Man and His Music has been dedicated to the late Stanley Kay, founder of DIVA, and Mandel's band mate with Buddy Rich in the late '40s, who died within a month of these performances.

Welcome from Todd Barkan; Low Life; Close Enough for Love; Not Really the Blues; Emily; Black Nightgown; What a Little Moonlight Can Do; Where Do You Start?; T'Ain't Nobody's Business; Theme from M*A*S*H (Suicide Is Painless); The Shadow of Your Smile; Cinnamon and Clove; Theme from I Want to Live!; TNT.