Noriko Ueda is originally from Hyogo, Japan. Her musical background consists of studying classical piano since the age of 4, playing electric bass since the age of 16, studying classical voice at the Osaka College of Music where she received a diploma, and at age 19, learning the double bass, which is currently her main instrument. Noriko was a B.E.S.T. scholarship recipient and majored in Jazz Composition at the Berklee College of Music in Boston where she graduated in 1997, relocated to Brooklyn, New York in 1998. Noriko Currently performs and tours with various groups including the legendary singer Grady Tate Quintet, Ted Rosenthal Trio, the DIVA Jazz Orchestra, DIVA Jazz Trio, Five Play and she also leads her own big band “ Noriko Ueda Jazz Orchestra”. Some of the venues that she has appeared include Carnegie Hall, The Kennedy Center, Apollo Theatre, Blue Note, Dizzy's Coca Cola and Birdland. She has also performed with Frank Wess, Kenny Barron, Victor Lewis, Gary Bartz, Nancy Wilson, Roy Haynes, Joe Chambers, Steve Nelson, Junior Mance, Larry Willis, Lew Tabackin, Gregory Hutchinson and many others. Noriko is the winner of the third annual BMI Foundation/Charlie Parker Jazz composition Prize for her original big band piece "Castle in the North" (2002).

Straight-ahead to experimental, electric or acoustic, funky or bluesy, instrumental or with vocals, these female bass players cover the whole low-end gamut with their fascinating projects. This mixtape is a fun-filled companion to the two parts of our show “Bassisterhood" (click here for Part 1 and Part 2). Happy listening!

A jazz band was formed a few years ago, comprised completely of women. That was by design for a moment in time at a jazz festival. But the convergence of these great musicians--dubbed collectively as Artemis--is growing to be something more. The members coalesced in a special way. Its importance remains to be seen. ...

It's truly exhilarating yet sadly mundane and reductive that a recording as vital and victorious as Artemis will be universally hailed as a first from an all-female supergroup. That it cuts across all generational, cultural, international, and ethnic planes. That Blue Note Records has expanded its ever legendary ranks to include, well, you know, a female ...

After more than twenty-five years as one of the world's most renowned big bands, drummer Sherrie Maricle's superlative all-female DIVA Jazz Orchestra invited a quartet of “the boys" onboard to help ensure the ensemble's twelfth album's success. Even though DIVA needs no consorts to affirm its unremitting mastery, it is nonetheless pleasurable to witness these talented ... 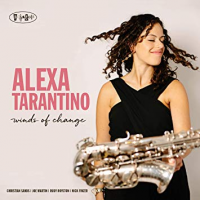 Coming at her music with an impressive embrace of style and tradition, and blending a natural youthful inquisitiveness and confidence to make the music her own, saxophonist-flautist and full-of-flair composer Alexa Tarantino--along with pianist Christian Sands, bassist Joe Martin, drummer Rudy Royston and trombonist Nick Finzer--makes big strides towards the limelight on her Posi-Tone Records debut ...