From playing in the Sahara Desert, just North of Timbuktu, with Roswell Rudd’s Trombone Shout Band (2004), to creating music in a grain silo at an artist colony in upstate New York, to traveling all over the world with Frank Sinatra (1987 - 1994); trombonist/composer Deborah Weisz’s life in music has been filled with diversity. Originally from Chicago, IL, Deborah’s family moved to Phoenix, AZ where she began playing the trombone at the age of 10. When asked why she chose the trombone... “when the band director was naming instruments I thought I would play flute or clarinet, but when he said ‘trombone’ my hand went up

Ornette Coleman once said that sound has no parents. But that doesn't mean we can't be its children. On that point, jazz has always been something of a parental force, connecting progenies of representation across geographic and cultural borders. Its relationship to struggle has, however, at times been overshadowed by debate. On the one hand, jazz ... 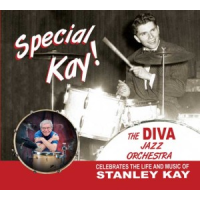 WOW! No, it is definitely not advisable to open a review with an unequivocal superlative (for one thing, it sort of gives the game away, doesn't it?). But on Special Kay!, its ninth impressive album in twenty-four years, DIVA--the gold standard among all-female big bands since its inception--really gives a commentator no reasonable ...

"Years ago it would have seemed an impossible dream to get to record with this musical magus, but here we are... and what a thrill!" class="f-right">--Charlie Kohlhase, From liner notes to Eventuality: The Charlie Kohlhase Quintet Plays the Music of Roswell Rudd (Nada, 2001) I see him suddenly as if in a ...