By Mark Corroto
November 8, 2015
Sign in to view read count 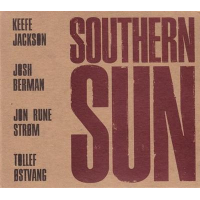 In this new century, there is no language barrier, musically, between the two countries. Proof positive is Southern Sun by the Chicagoans Josh Berman (cornet) and Keefe Jackson (saxophone and bass clarient) and Norwegians Jon Rune Strøm (double bass) and Tollef Østvang (drums). The quartet speaks the common language of Ornette Coleman with a John Carter/Bobby Bradford accent.

Like the Carter/Bradford sessions, this recording proceeds without chordal instruments. The musicians rely on an internal group sense of freedom and swing. Their trust in a blues sensibility, the same that carried the day for Coleman and Don Cherry, makes these eight compositions memorable.

The Chicago pair have collaborated in the Chicago Luzern Exchange, Fast Citizens, Lucky 7s, and Jason Roebke's Octet and the Norwegians in Friends And Neighbors, All Included, and Universal Indians, whose last recording Skullduggery (Clean Feed, 2015) featured Joe McPhee.

The writing responsibilities on the session were share by all members, who must have been attuned to Berman's A Dance And A Hop (Delmark< 2015). The quartet favors minimal phrases that get repeated with the paradoxical hip precision. Berman's slurried-to-serious cornet sings the title track while the constant pulse of Strøm's bass anchors the piece and Jackson's bass clarinet holds the bottom. Berman and Jackson often play in pair, as on "Your Uncle," with Østvang's working brushes over drum sticks. This choice, and his use of hand drumming, is the appropriate approach to the intimate music made here. The music maintains a intimate quietness here, with the underlying suspicion that at any moment things might get loud.