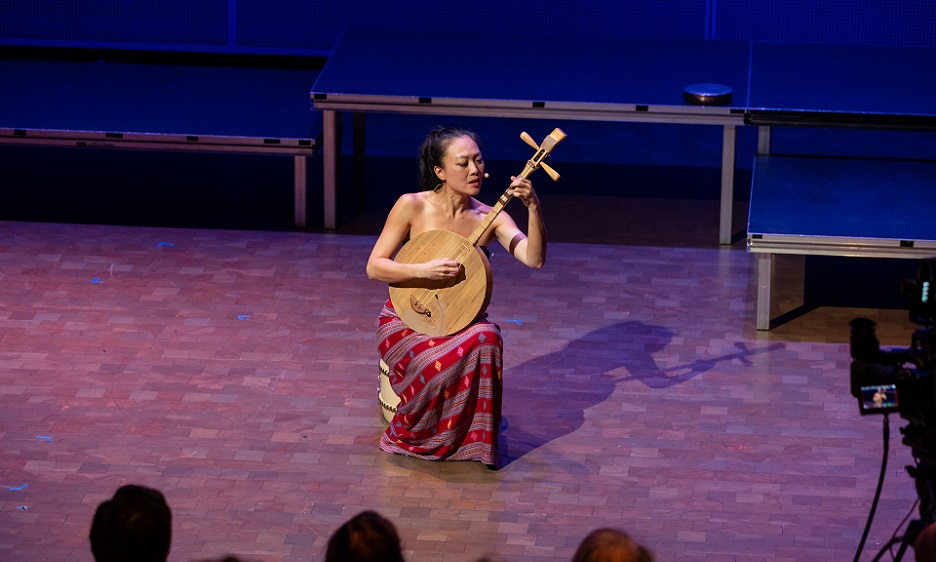 When the organizers of San Francisco's Other Minds Festival chose Moment's Notice as the name of its 25th edition, it might have been with the hope that the difficulties of making pandemic-dictated snap decisions were behind them.

Things didn't quite turn out that way. Travel plans for Wadada Leo Smith were discouraged by his doctors, French bassist Joëlle Léandre's were scuttled by pandemic-era regulations. Undaunted after the event's cancellation in 2020, curator Harry Bernstein nonetheless assembled 26 of the world's most eminent improvising musicians for a festival so loaded with talent that a fourth day of performances was added.

With an artist roster that included Anthony Braxton, Mary Halvorson, Roscoe Mitchell, Myra Melford, William Parker and Tyshawn Sorey, Moment's Notice read like a Vision Festival by the Bay. Yet while eminent artists identified with jazz have been present since the first installment in 1993, improvisation has never been the sole focus until now.

Bay Area composer Charles Amirkhanian founded Other Minds as a showcase for contemporary and experimental music. Whatever those terms might have described in the early 1990s, they have broadened since to embrace an increasing number of artists with a background in Black American Music, and other disciplines. Moment's Notice seems intended as both ratification and celebration of this emergent reality.

The evening began for the near-capacity audience in the 300-seat Taube Atrium Theater with a performance by a trio of pianist and composer Myra Melford with her longtime collaborator Mark Dresser on bass and Oguri, a movement artist trained in the Japanese butoh tradition.

Which took primacy, the movement or the music? Ultimately, the question lost its interest. With music, movement and form all spontaneously created and negotiated in the moment, this was improvisation in its purest and most risky form. Wayne Shorter has famously said that jazz means "I dare you." In the hands and feet of Melford, Dresser and Oguri, above all it means "I trust you."

The strong visual element of the opening trio extended to the 40-minute set by Zeena Parkins, Ikue Mori and William Winant. With Winant tapping mallets on the wall of the theater's alcove, Parkins, dressed in a tailored gray suit, opened by crumpling a sheet of slivery plastic bubble wrap that she flung aside as she sat the wrong end of her harp to pluck its bass strings. Winant laid the plastic on his vibes, beating a staticky sound out of the normally liquid sounding instrument. Mori sat at a banquet table, tapping electronic sounds from her laptop with the impassivity of a teacher silently proctoring an exam. It was great fun, especially when Winant squeezed avian wails from a yellow balloon and Parkins responded by licking her fingers to play a wobbly friction drum sound on a harp string—the sound and sight of surprise.

Jen Shyu's "Nine Doors," here in its West Coast premiere is a monodrama inspired by the horrifying death in a road accident of her friend Sri Joko Raharjo, his wife and their son. The narrative thread, more like a rite of passage, leads their young daughter, who survived the accident, through the titular doors of grief, aided and comforted by ancient feminine wisdom conveyed through myth, legend and metaphor.

Shyu, who played a variety of instruments, speaks ten languages and she sang in eight of them here: Indonesian, Javanese, Taiwanese, Mandarin, Tetum, Korean, Japanese and English. This was no barrier to understanding; the grief at the center of the narrative is ultimately unspeakable anyway and was brought to life by the fierceness and commitment of Shyu's performance. Not much about "Nine Doors" could have been improvised, but that didn't matter. This was primal theater, terrifying, riveting and cathartic.

"Life has no boundaries when every place can be home," Shyu's disembodied voice intoned toward the end of the piece. The long concluding blackout arrived as a relief, a moment of grace and silent prayer of thanksgiving. We were home.