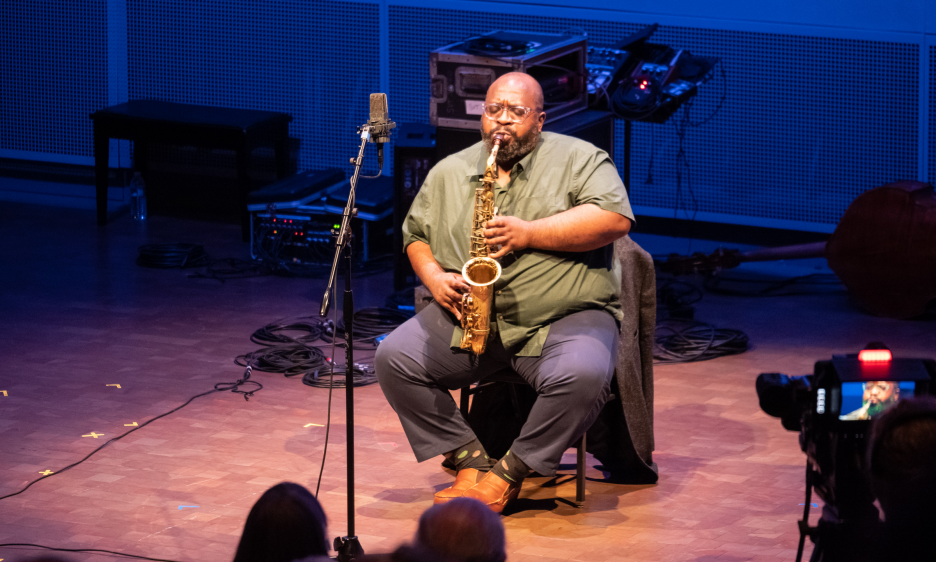 Moment's Notice, the theme of the 25th Other Minds festival, was a wry comment on the perils of mounting a music festival in a time of uncertainty. It's an undertaking that requires not only a Plan B, but an entire alphabet of alternatives.

Festival curator Harry Bernstein had to reach for several of these to present an event that had been twice postponed. When he had to patch a late cancellation by French bassist Joëlle Léandre, who was unable to enter the country, help was close at hand in the form of saxophonist Larry Ochs and drummer Donald Robinson.

Having played together for three decades, they were not only local and available, but just back from a tour of the Midwest to support their 2021 ESP-Disk' release, A Civil Right, they were also in peak form. The shimmering, almost ritual resonance of Robinson's cymbals on "Yesterday and Tomorrow" and the tone colors, from chalky dissonance to full-throated multiphonics, that Ochs drew from his sopranino, soprano and tenor saxophones were evidence of deep rapport and an assured command of even the subtest gesture. Ochs and Robinson made a case for creative music in the Bay Area that was as subtle as it was strong.

In the discussion preceding the concert, moderator Nate Chinen asked the panelists how the pandemic year changed their music and methods. "It made me want to take more chances," saxophonist Darius Jones said, adding, "Some people think I was doing that anyway, but now I'm blowing the roof off it."

That comment exploded into a prediction as Jones delivered a solo performance of searing intensity with a tone massive enough to reduce the Beaux Arts marble of San Francisco's Veterans Building to dust. Jones too drew his material from a new release, Raw Demoon Alchemy (A Lone Operation).

The parenthesis is telling; "Alchemy" is both a solo saxophone outing and a breakup record and Jones played this material with a raw emotionality that held the near-capacity audience in expectant silence for 45 minutes. Georgia Anne Muldrow's "Figure No. 2," which opened both the record and Jones' set, repeats two seven-note phrases, a question and its answer, without changing register. Jones sustained tension by varying the space between the phrases and sometimes the notes, and by subtle changes in tone and even intonation. This was a daring way to begin and declared that Jones was not about to play it safe. On several compositions, Jones assembled fragments of improvised phrases melodies that only at the end emerged as a theme; it was like watching film of an explosion in reverse.

The Taube Atrium Theater where the festival was held once housed the San Francisco Museum of Modern Art. Using a full palette of extended techniques, split tones, overblowing, false fingerings and whistling harmonics that sounded like Tuvan throat singing, Jones made the space a canvas on which he painted a monumental Expressionist image in sound.

It was surely a coincidence that Jones included "Nonaah," perhaps Roscoe Mitchell's signature work, on both "Raw Demoon Alchemy" and in his Other Minds performance. Coming before Mitchell's concluding set, it felt like an homage. The great master of the Association for the Advancement of Creative Musicians was scheduled to perform in a quartet that included trumpeter Ambrose Akinmusire, but Akinmusire's management double-booked his band into the Village Vanguard for the same weekend. Undaunted, Mitchell chose to perform as a trio with longtime collaborators Vincent Davis on drums and bassist Junius Paul for one of the most anticipated sets of the four-day festival.

Even at 81, Roscoe Mitchell is a treasure whose musical imagination is undiminished. He is a beacon and an inspiration for creative musicians across genres, a giant of our time. At this point in his legendary career, Mitchell has more than earned the stature to do what he wants, but that fact aside, this was a difficult set to listen to. Coming slowly onstage to well-deserved applause, Mitchell seemed hesitant on the bandstand as though he was searching for a way into the music. Looking for clues that might indicate a direction, Paul and Davis paid close attention to the saxophonist, yet seemed reluctant to take the lead. Mitchell, with his back to the audience, bit off short phrases, first on sopranino and then on soprano, but quickly abandoned them as a chef would an imperfectly shaped garnish. In doing so, he appeared to be wrestling, not with his instruments, exactly, but with sound itself. Still, confronting listeners and challenging them to think deeply about sound has been Mitchell's life's work. His music has never offered easy answers, but instead continually raises profound questions, questions that many of us were asking ourselves as we left the hall after this enigmatic but archetypally provocative performance.