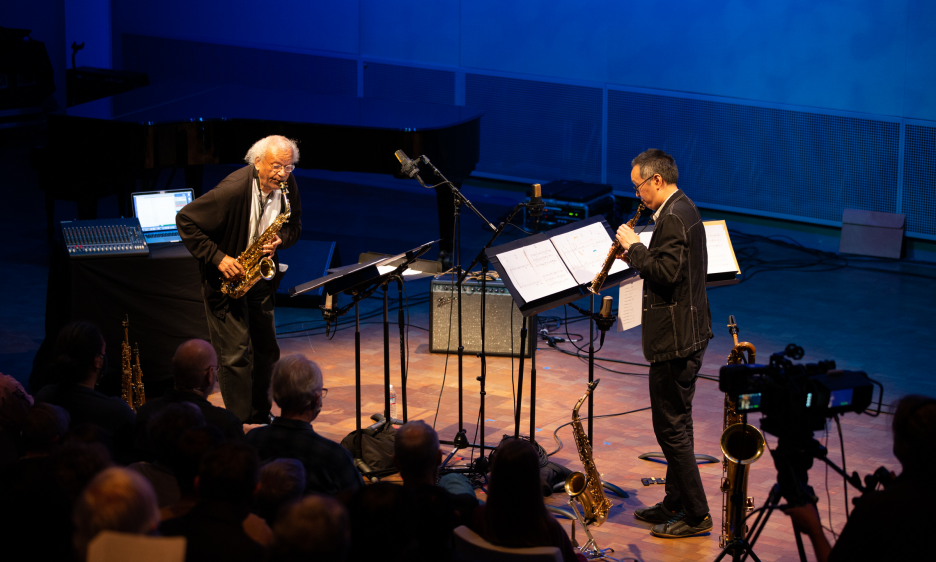 Outside the hotel on the morning of the final day of Other Minds 25, curator Harry Bernstein, nearing the conclusion of the twice-postponed festival over which he presided, scanned the sidewalk while a car waited at the curb. In moments, the object of his search emerged behind him. To alert Bernstein of his presence, this writer called out, "Good morning, Mr. Braxton!" Bernstein returned his greeting whereupon the great man responded, his face shining like a sunrise over San Francisco Bay, "Good morning! It's wonderful to be back and making music in this beautiful city."

Braxton's sentiment, so full of generosity and joy, seemed especially apt. Yes, it was wonderful to be back, back in a room with musicians operating at undiminished levels of creativity and lifted by the miracle of something that we all perhaps had come to take for granted.

The three matinee sets of Day 4 were bathed in a companionable glow, unfolding with the easy pleasure of enjoying Sunday morning coffee on a sunny balcony. This sense of ease pervaded the pre-concert roundtable. When host Nate Chinen asked guitarist Elliot Sharp what he learned in pandemic isolation, the guitarist replied, "That Newark Airport has not improved." Sharp also recalled the first time he heard guitarist Mary Halvorson. "IShe was playing with [violist] Jessica Pavone," he remembered. "It was like Anton Webern meeting the Shags."

That description fit portions of Halvorson's duo with pianist Sylvie Courvoisier, and since the material was drawn from their new release "Searching for the Disappeared Hour," Proust figured into the mix, too. Halvorson described the music as being about "the weirdness of time during the pandemic" which was "disorienting because there were so few markers." She noted that the running time of the recording is almost exactly one hour, a strange and haunting irony.

The music, too, was often strange and haunting, with spooky deep-night chords dissolving in silence. But it was also punctilious and frequently humerous, as in the opening "Bent Yellow," where a crisp unison passage over a rocking Alberti bass figure drifted out of sync, ultimately collapsing into a pile of musical rubble. Hints of boogie-woogie blues also made their way into the mix. Like the entire set, there was playfulness alongside the pallor.

A sense of play also informed Sharp's solo set. Flanked by two widely spaced Fender amps, the guitarist used springs, the tapping of his fingers and what looked like a credit card to summon aural phantasmagoria from his eight-string (six guitar strings and two bass strings) instrument. The frets on this axe are not parallel; they fan out like sun's rays, and the music did too, sometimes evoking a gamelan and at others the jump-cut cartoon music that so inspired the 80s downtown New York scene of which Sharp was such a big part.

Various loop effects and pedals gave the music a room-filling spaciousness, but there was ample grit in Sharp's conception, too. His music walked the streets as often as it traveled the spaceways.

Which brings us to the concluding duo performance of saxophonists Anthony Braxton and James Fei. This felt like a homecoming and one that was long overdue. Braxton taught at Oakland's Mills College for five years but left for Wesleyan University in 1990. Though he is the seeming embodiment of the festival's borderless aesthetic, this was, rather incredibly, his first Other Minds performance. Fei studied at Wesleyan and now teaches at Mills himself. He is the president of Braxton's Tri-Centric Foundation and the two have an extensive history of playing and recording together.

On this night, Fei announced, they would play a Composition 429, a new work using a recent compositional system called Lorraine that judging from a glance at the scores on the music stands used Braxton's system of language musics. Using a set of hand signals—arm chops and thumbs-up gestures—Braxton cued new portions of the composition.

Arrayed before both players were alto and soprano saxophones. Fei had a baritone, and carrying forward a festival trend, Braxton also had a sopranino. On a table behind Braxton was an Apple computer that he engaged infrequently. Two sets of microphones at each player's station hinted that the electronics were interactive, but most of the time, the laptop seemed to function as an electronic shruti box, emitting drones and ghostly atmospheres.

You don't need to know music theory to appreciate a Bach Passion setting or an Ellington pastel, but even a cursory familiarity with Braxton's singular methodology adds to the richness of the experience. Thus it was for this listener for whom the impression of inscrutability that has unfortunately clung to Braxton's music was vanquished by the sheer elan of the players. Several times during the performance, Braxton bounced on his toes in delight.

So, delight. If there was a theme for Other Minds 25, delight might have been it. As Sharp said in his panel remarks, "Nothing replaces being in the room together." When that room was the Taube Atrium Theater filled with some of the world's finest improvisors, listening to music in this beautiful city was a pleasure well worth waiting for.