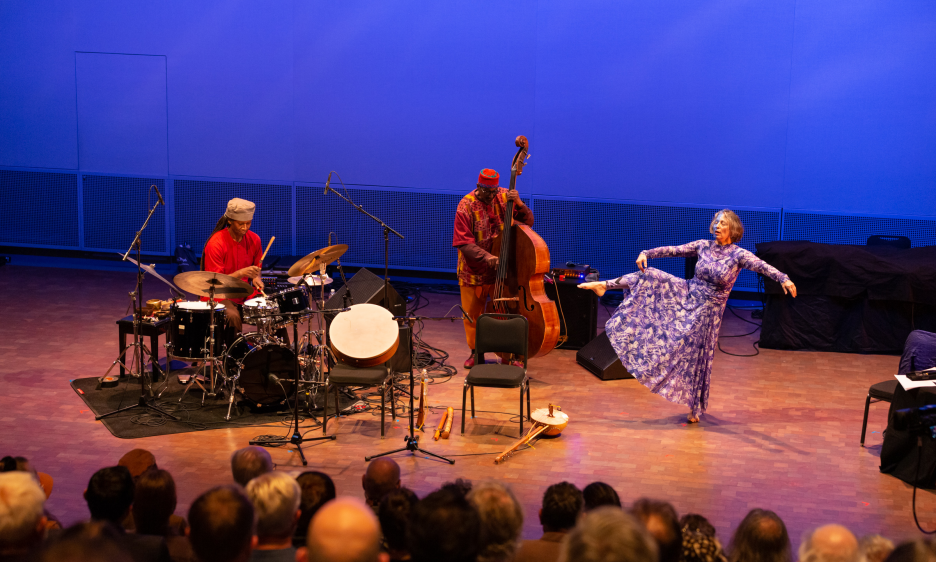 There are festivals for which centering the social aspect of music is the point of the exercise. Conceived, as founder Charles Amirkhanian put it in Thursday's pre-concert talk, a vehicle "to support artists who don't... have commercial potential," San Francisco's Other Minds is not Bonnaroo. Yet each of the three sets presented on the second day of the festival, titled Moment's Notice, made strong connections with social music, intentionally or otherwise.

Porch Concert Material, the name of the trio convened by clarinetist Ben Goldberg, made this inspiration explicit by mapping the concept of his Plague Diaries solo compositions of 2020 onto a trio formation. Drummer Gerald Cleaver and guitarist Liberty Ellman are fairly recent arrivals in the Bay Area. Along with longtime resident Goldberg, they formed a locavore trio that could convene on a Bay Area porch at a moment's notice. In the panel discussion that preceded the evening's music, Goldberg said that during quarantine, he found great comfort in the music of Lightnin' Hopkins, especially the way Hopkins could make phrases sound like something new each time he repeated them. "I wanted to do something like that," Goldberg said. "I wanted to find my own language." Like the clarinetist's 2021 release, Everything Happens To Be, (BAG Production) the language spoken by Porch Concert Material was graceful, patient and a little wistful, nodding to blues, Jimmy Giuffre-style chamber jazz and salon music of a century ago. Unspooling in a seamless set, Goldberg's nimble compositions arrived like the audio diary of an unhurried walk down a street of elegant old homes, each with a gathering of exceptionally accomplished musicians playing on the porch.

For bassist William Parker and his life partner, Patricia Nicholson, all music has a social function, that starts with consciousness raising and community building. Together with essential collaborator Hamid Drake on drums and percussion, they offered "The Sky Is Trembling," a piece incorporating poetry and dance by Nicholson with music. Nicholson, half her face painted sky blue, began with a warning: "The sky is trembling. The earth beneath our feet no longer solid. Never was. Never will be." Drake, his drums shrouded in cloth, summoned earthquake sounds while Parker bowed tremors from his bass. The mood lightened when Parker took up the ngoni, a harp-like instrument from the Sahel, to pluck gentle arpeggios. "The sky has been falling for some time now," Nicholson intoned, "but there are sky catchers whose brushes are made of light" at which a blast from Parker's double-reed shenai arrived like lightning. The barefoot Drake, from whom rhythm flows as easily as breath, switched to frame drum and sang, "Love is here to stay" as Parker responded with "Death has died today." In its incantatory power and ritual-like form, "The Sky Is Trembling" brought the collective spirit of New York's Vision Festival (founded by Nicholson) to the Atrium Theater.

Tyshawn Sorey is the man of the moment in creative music. On the Venn diagram showing where composition and improvisation, jazz and concert music meet, Sorey would tower at the center, the embodiment of festival curator Harry Bernstein's programming philosophy for Other Minds this year. The breadth of Sorey's work in the past year alone is stupefying: major jazz releases, the premieres of two significant concertos and an appointment to the composition faculty at the University of Pennsylvania. If he were to release a polka record next week, it would surprise no one, and it would probably be great. Yet no matter the setting, Sorey's singular musical personality blazes brightly. On this night his chosen role, power drummer, was familiar even as the setting of a duo with King Britt, a Philadelphia-born composer, producer, DJ, electronic musician and professor was novel. Britt's electronic pulses, washes and drones stretched a canvas on which Sorey created action-painting live rhythms. Sorey is a big man, and his cymbal crashes and snare-drum thwacks had a pummeling physicality. His kick drum detonations landed with such force that he had to pull the drum back to his foot several times. On one level this was classic punch-and-roll funk drumming, as monumental and relentless as anything laid down by Dennis Chambers or late-period Tony Williams. But there was something far subtler going on here: the superimposition of cycles of rhythm. This was easy to miss as waves of sound crashed into a listener's consciousness. Like "The Rite of Spring," Tyshawn & King (also the title of their new recording) summoned in a concert setting the transcending ecstasy of the dance floor, dissolving the boundary between the body and the mind.