The Beatles: Let It Be - Super Deluxe Special Edition

By Doug Collette
October 24, 2021
Sign in to view read count 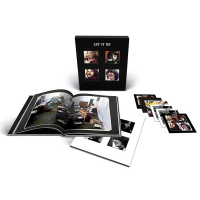 It's perfectly reasonable to state that The Beatles' Let It Be Super Deluxe Special Edition is the iconic group's third attempt to release music from their (three weeks of) January 1969 recordings. Originally set to be released as an album titled Get Back Don't Let Me Down and 12 Other Songs (as emblazoned on a contemporary cover photo replicating that shot on their very first long-player from 1963), that collection morphed into Let It Be (Apple, 1970), the initial foray followed some years later with Let It Be... Naked (Apple, 2003).

Unfortunately, neither release did full justice to the concept at the heart of the project. Initially imagined primarily as a means for the quartet to make stripped-down music as a unit, not in the fragmented approach that evolved during the making of The Beatles (Apple, 1968), a/k/a/ 'The White Album,' the sessions also carried the underlying premise of preparing for a live performance coincidental with the issuing of the resulting album plus a film documentary of the entire chain of events. As a companion piece to Peter Jackson's film as well as the 240 page hardcover book, this six-disc set clarifies both the circumstances and end results of the Beatles' efforts. And, miraculously, based on the over fifty year interim since it all took place, this collection achieves its purpose without undermining the creative wonder of it all (notwithstanding the comprehensive track-by-track breakdown)..

The curators, producers and writers achieve through meticulous attention to detail that takes multiple forms. Not only is the varied nature of the music itself emphasized in its compartmentalization, but graphics formatting features a custom sleeve for each disc. And the cosmetics extend to the design of the die-cut slipcase that, apart from enclosing the hardbound 105 page book of essays (by the equally erudite Kevin Howlett and John Harris), photos and other pertinent imagery, houses a media carrier that on the side opposite the now familiar LIB photos sports the black and white images (from the album's back cover) of the Beatles more representative of the often raucous goings-on inside.

Such packaging is all the more fitting considering how accurately it reflects the bulk of the musical contents. It's quite clear how the Beatles share a palpable joy in making music together. Not surprisingly, it may well be deepest as they work out the nuances of the wide selection of new material on CD two: outtakes and alternate arrangements of familiar originals like "Two of Us" and "I've Got A Feeling" are taken from 'Apple Sessions' in the hastily-improvised studio in the basement of the Savile Row building (on the rooftop of which they eventually offered their now legendary performance).

Thanks in no small part to the amiable presence and tasty accompaniment of keyboardist Billy Preston, the warmth is as self-evident here as was the chilly air of the previous and less productive get-togethers at Twickenham Studios for the sake of filming by Michael Lindsay-Hogg; the director of British TV's Ready Steady Go!, previous Beatles music videos and The Rolling Stones Rock and Roll Circus (Abkco, 2019) (originally from the year prior to this endeavor) kept both cameras and tape recorders running for the duration at that location as well as the London office edifice.

Still, the mutual pleasure of the Beatles (plus Preston) playing together is most obvious in the brainstorm-like spontaneity of the Rehearsals and Apple Jams. A number of segues carry over here, including not only their recently-composed tunes, but also some the older vintage like "Please Please Me." Then there are covers such as the Everly Brothers "Wake Up Little Susie" interwoven into the various extend spirits of the moment that reaffirms the ongoing nature of a creative process that subsequently led to the creation of Abbey Road (Apple, 1969).

Four tunes that eventually turned up on that record, out later this same year, show up here in skeletal form, including Starr's initial sketch of "Octopus's Garden," as do some future solo selections like Harrison's "All Things Must Pass." Thus, the existence of the Let It Be EP in this box is representative of the subsequent delay in the release of Get Back. Unreleased Glyn Johns 1970 mixes of John Lennon's "Across The Universe," and George Harrison's "I Me Mine' suggest how different might have been that final album the foursome made during the ensuing summer under the aegis of long-time producer (Sir) George Martin.

Then, new mixes of original single versions of "Don't Let Me Down" and "Let It Be" hint at how tempted Phil Spector was to create a Beatles album in his proprietary sonic image, rather than one in line with the group's own studio precedents. Son of long-time Beatles producer, Giles Martin, along with engineer Sam Okell, perform remixes to mitigate the unforeseen shortfalls of the half-century plus LP, but their work does not entirely camouflage the blemishes. The lush orchestration on "The Long And Winding Road," for instance, is in stark contrast to the spare string quartet on "Eleanor Rigby" from Revolver (Parlophone, 1966).

This most circuitous route taken to enlisting the father of the so-called 'Wall of Sound' came only after engineer Glyn Johns was assigned the task of compiling an album. As noted in the essay by that soon-to-be famous producer of The Who and the Eagles, among others, his assemblage of mostly early takes was meant to radiate a spontaneous immediacy, And. in fact, it does, the fourteen tracks playing like a single protracted moment of collective inspiration, the informality of the atmosphere and the intimacy of the Liverpudlian's artistic fraternity further enhanced by the dialogue interwoven with the music.

In the context of the long-bootlegged LP, guitarist Harrison's "I Me Mine" is a slice of life from a most turbulent time for the Beatles, while his "For You Blue" is a jolly, skiffle-derived shuffle with Lennon on lap steel, gleefully encouraged by the author. Such musicianly camaraderie less evidence of the rancorous impression left by the original movie of these proceedings than a display of the Beatles' chemistry as a band. Still, within this good-natured and open-minded atmosphere, there's a nagging sense the group's existence might well be drawing to a close: "I've Got A Feeling" indeed. The exhumation of "One After 909," one of the first Lennon/McCartney co-writing collaborations, is an oblique inkling of that notion to be sure, but clearly more indicative of that is "The Long and Winding Road," Sir Paul's healthily-nostalgic reflection on the overarching bond between all four men.

And contrary to McCartney's self-awareness in the title song—almost a plea of sorts—Lennon's self-professed paucity of originals belies their depth of passion, both in the jocular Joycean wordplay of "Dig It" as well as its corollary expression of devotion in that tune's refrain as well as "Don't Let Me Down." The including of "Two Of Us" is telling as well: one of the first composing collaborations of Lennon and McCartney, it is an upbeat and infectious mirror image of the latter's graceful ruminations on the foursome's shared history.

At joyful moments like those, the most finely-tuned ears of audiophiles may not be able to resist a visceral response to the music any more than other listeners unconsciously responding to the tactile presence and clarity of the sound quality on the CDs. In that sense, the Blu-ray disc of high-definition sonics featuring Dolby Atmos and 5.1 expands the attractions of this Super Deluxe Special Edition; the box's slightly smaller physical dimensions (compared to previous anniversary reissues) is no more indicative of the value of its content than the comparatively shorter total running time—except perhaps to those inclined to quibble on price (or who wish the entirety of the aforementioned rooftop gig was appended, perhaps to the EP).

And even as it is well-nigh impossible to avoid succumbing to the what-if scenarios of a group hiatus and/or solo albums that might've allowed the Beatles to continue on past this point in their career, it is also difficult to underestimate what a profound milestone this configuration of Let It Be represents. Musicians who had heretofore accomplished so much that had never been done before did exactly what they set out to do here, at least while they and their immediate circle of collaborators retained a grasp of both the means and the ends of the activity in progress. As such, this package, along with its multi-media counterparts, is a direct extension of the hierarchy of ambitions at the heart of the "Get Back" concept.