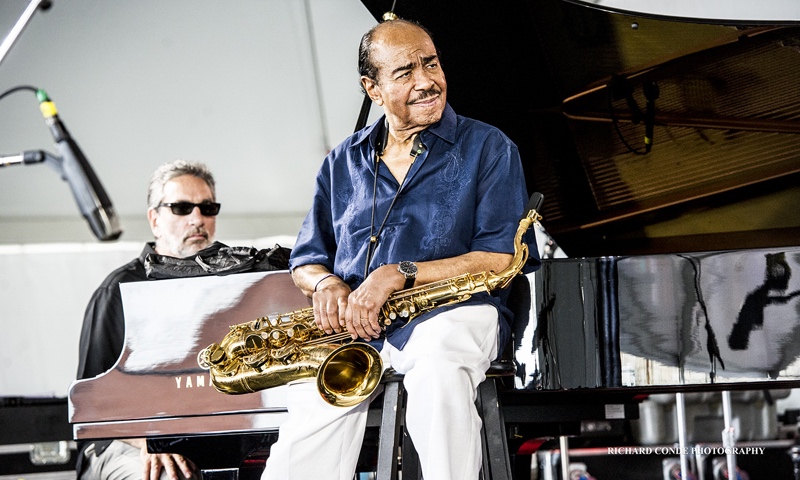 The soggy, gray blanket that was the Newport sky wrung itself out on the crowd that had gathered for the 2017 Newport Jazz Festival presented by Natixis Global Asset Management, but the good news was it only rained on the audience for about an hour. Danilo Pérez's piano oozed melancholic, broken chords, while Avishai Cohen's trumpet filled loose spaces in the music with long, ringing notes. The horn suddenly screeched—fast and intense. Perez adeptly played more melodic on the set opener "Jessica's Day," a Quincy Jones arrangement for Dizzy Gillespie. Clever rhythms, plush sounds, and jerking horns played to the Latin feel of another Gillespie number, "Cubana Be Cubana Bop." Gillespie, widely known for bebop innovations, was also part of a movement that blended bebop ideas with Cuban rhythms and gave rise to Afro-Cuban Jazz. Perez's set, dedicated to Gillespie and Thelonious Monk, also included "Pannocia," "Off Minor," and "Afro Blue."

With a crushing blow, capable of knocking most people flat, the Vijay Iyer Sextet opened with "Poles." A set of liquid sound that possessed the ability to contour to unseen containers, the music moved in waves—dramatic, free. At times slow and explorative, with less connections to harmony, the thematic movements featured climbing progressions that gracefully swooned, rather than abruptly fell, from its peaks. Most of the set contained music from the band's upcoming album Far From Over (ECM, 2017).

A hulking mass of sound, comprised of nearly 20 musicians, the Christian McBride Big Band played round tones that were warm and bouncy. Opening with "Walk On," McBride stood front and center, navigating from a musical cockpit, on a set that featured orchestration and arrangement. "Newport, what's happening? What it do?" he asked the crowd. "You're gonna feel a lot of soul." The band included McBride's arrangement of "Thermo," a Freddie Hubbard note from his days with Art Blakey. McBride's bass emitted thick, vibrating notes that buzzed among riffing horns. "That trumpet lick, that's a hard one," McBride joked. "I can picture Freddie Hubbard laughing." Throughout the set, McBride directed the flow of sounds, waving his arms to indicate the direction of the music, and pointing out members of the bandstand to rise and solo. Always jovial, the bassist appeared to enjoy the sounds, which included the James Brown inspired "Brother Mister," "Used Ta could," and "In A Hurry," among others.

The clean, relaxed sounds of Benny Golson's Quartet provided an intimate set from authoritative musicians. Dense and impenetrable, Buster Williams's bass churned the foundation for Golson's lyrical horn on the melodic opener "Horizon Ahead." A connection to a magical era in jazz, Golson spoke about playing at Storyville in Boston—a club owned by George Wein, who was influential in founding the Newport Jazz Festival. Golson explained that it was at Storyville where a musical idea occurred to him. He played the music for Dizzy Gillespie, who decided to record it. "The song means absolutely nothing," Golson chuckled, as the band worked into "Whisper Not." On the stylish, slow tempo theme, Golson's saxophone sang above Mike LeDonne's melodic piano lines, and the band improvised to the familiar blues structure.

"When I take the chair, you know I got quite a bit to tell," Golson told to the audience, making himself comfortable. Reflecting, he spoke of particular performance with Dizzy Gillespie at the Apollo Theatre. Walter Davis Jr. rushed in bearing the dreadful news that Clifford Brown, a young, promising jazz musician, was killed in a car wreck—his life tragically cut short. Golson recalled that when the musicians took the stage ..."we were playing that loud, happy music...and the band played with tears running down our cheeks. We loved Clifford. He was only 25 years old."

Saddened and moved by the events, Golson decided to write a song "to help people remember that bright, young trumpet player." Unsure of what he crafted, he sought out Dizzy Gillespie. "Sometimes you're too close a thing," Golson explained. "That's beautiful, what is it?" Dizzy inquired upon hearing the song, reaffirming Golson's effort. Dizzy, along with numerous other jazz musicians, including Lee Morgan, Donald Byrd, and Sonny Rollins would go on to record the song Golson initially doubted. "What would have happened if Clifford Brown had not been killed?" Golson asked as the audience as he began a stirring rendition of "I remember Clifford." Golson smiled and listened to the musicians play on the sorrowful ballad, as the hot sun broke through the sky's remaining gray clouds.

In the end, it was another successful installment of the Newport Jazz Festival, and the music's diverse sounds. Danilo Perez used a fresh musical approach to honor prolific names from jazz's past, while the Vijay Iyer Sextet portrayed the innovations of today. Christian McBride brought a modern interpretation to Big Band music, while Henry Threadgill showcased constant invention and creativity. The touchstone performance just might have been Benny Golson, who simply brought pride and history to the music known as jazz.