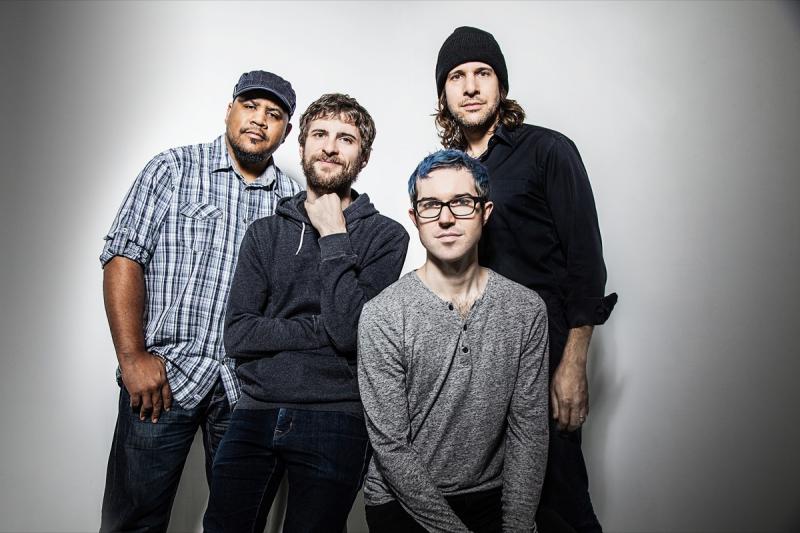 One can be well-versed in the two (whoops, now three) albums worth of music by FORQ, (and in the music from the other bands the individual members hail from) and still not be totally prepared for the impact of the following statement:

This is understandable given that they were kind of a tough band to catch live. Fortunately, with the release of their third album, Threq, they are now touring their music to a larger swath of audiences around the globe. This is good news for for the band (and for the public) because live, FORQ's music has an added dimension of openness, adventurousness and power -something that was inescapable at Philadelphia's World Café Live this Summer night.

Despite following an impressive set from the very tight and muscular 11-piece Snarky Puppy- style collective, Magneto; the quartet launched into "Lymaxs" and quickly showed how they and their brand of quirky, exploratory, groove-smart music were powerful enough to fully occupy the sonic hole left by a (very good) band, nearly three times their size. No mean feat but as the set progressed, it became obvious the power of FORQ stems not only from talent but from personality.

Keyboardist Henry Hey seems responsible for a good bit of the brilliant quirk-and-smirk inherent in FORQ's sound. In many ways, that's a connecting thread with Hey's (lamentably gone) former project, Rudder (that included bassist Tim Lefebvre, saxman Chris Cheek and drummer Keith Carlock). As with that band, Hey's performance this night with Forq showed that his penchant for coaxing the sparkle out of the oddest of keyboard sounds is matched only by his daunting (if not always apparent) facility and his sympatico musicianship. But whether supplying hooky melody lines to heads, providing empathic support to other soloists, or wowing with a formidable improv himself, Hey exuded an easy-going, anything-for-the-music nature that seemed to be contagious, if not emblematic, for the whole band. (The best example of this may have been when Hey nonchalantly battled a failing keyboard stand in the midst of rendering a seamless and thrilling gospel-tinged solo on the soulful "Mangata.")

It makes sense that Hey has found a kindred spirit in bassist Michael League, whose founding ethos for his own band, Snarky Puppy, is similarly one of musical smarts coupled with accessibility. Those who may have been drawn to hear FORQ coming from SP encountered a very related yet wholly different animal. Indeed, if Snarky Puppy is the house that League built, Forq may be his vacation rental, where he gets to relax into it a bit more (and split the rent four ways, so to speak). That apparent relaxation not only fits well with FORQ's fun demeanor but suited League, as there seemed an added measure of care-free spontaneity in League's playing this night. This was borne out by some nice solo spots and use of different bass sounds -( things that don't always surface in his performances with SP).

There may have also been some present who, in following the band from it's inception, still bemoan the loss of (former Lost Tribe) guitarist Adam Rogers -(who moved on after the first album and whose guitar duties were taken over by League's SP band mate, Chris McQueen). If anyone did miss Rogers this night, it most likely lasted for all of thirty seconds as McQueen quickly took command of his instrumental space -his mild- mannered looks quickly proving a thin disguise for the irrepressible sonic crusader within.

As one of Snarky Puppy's celebrated guitar triumvirate (with Mark Lettieri and Bob Lanzetti), he may well be the most under-praised, or at least most low-profile of the lot. (His brother Pups' brand of killer chops perhaps have a greater knack for cutting through in a large band situation.) In FORQ however, Chris McQueen may have found the ideal, more spacious vessel for his talents to expand into. His performance this night prompted a reassessment for him possibly being the most original thinker and fearless risk-taker of the "SP-Three." His talents for experimenting with textures and effects are given the wider berth they deserve in FORQ. From the silvery cosmic surf guitar of "Cowabunghole," to slide work on "Crush" to hyper-saturated tones on the majestic encore "Gerard," McQueen's unbridled performances were consistently among the highlights of the show.

It might be easy for some to overlook how masterful drummer Jason Thomas' role was in the evening's program. His rock-solid pairing with League and often deceptively simple delivery of FORQ's rhythmic foundations surely made him the man behind the curtain -(that most pay no attention to). But it's that solidity and eloquence coupled with the sheer breadth of styles and grooves covered in FORQ's setlist that made Thomas' performance remarkable to those who would notice. And for those that didn't, Thomas did finally break loose with a thundering solo spot on the set closing "Grout," -enough to leave a substantial impression on even the most inattentive of observers.

When the last notes faded out and the lights came up, there were smiles from the many who had expected a good show and knew they got it, but there were surely very few who anticipated just how good that show was going to be.

Catch FORQ if you can...