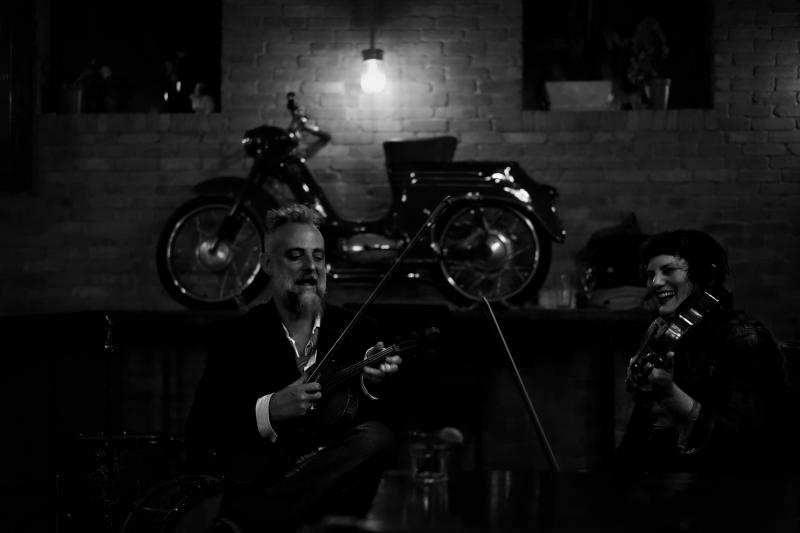 As part of the Konceptions Music Series at Korzo in Brooklyn, violists Mat Maneri and Tanya Kalmanovitch joined forces for an evening of intimate give and take. As equal partners of their instruments, they have lifetimes' worth of scenes, moods, and themes under their bows. How appropriate, then, that their collaboration should take the name Magic Mountain, after the Thomas Mann novel of the same name. One need look no further than Mann's masterpiece to find the most accurate description of what transpired on this Tuesday night:

"Music awakens time, awakens us to our finest enjoyment of time. Music awakens—and in that sense it is moral."

Indeed, in a climate that seems to be anything but moral, this music lit an inward flame for the politically overwhelmed, and brought with it confirmation of artistic exchange as the backbone of our sanity. A single note from Maneri unraveled all the elements of a symphony yet was content singing as soloist, while an arpeggio from Kalmanovitch unraveled all the elements of a single note yet was content singing as choir. At any given moment, if one was the moon, the other was its reflection, so that the slightest disturbance of the water might develop into a tidal shift of consciousness.

As characterized by the musicians themselves, their music was born in joyful silence, every semi-improvised piece a different expression on the same face. With the unknowability of a first blush, the first piece approached the space as a newborn the world. Like a sentient flower turning back to the soil of its infancy and imagining the wonders still wriggling in that darkness, it reached for the sun without ever forgetting where it came from. At one point, Maneri felt inspired to walk the room, as itinerant as his notecraft, while Kalmanovitch fortified the roots to which he returned. Their confluences produced resonant splashes, just as out of them the vessels forged by their conflict.

Every declaration was balanced by whispers, and nowhere more so than in the title piece of their new album, which in this performance treated silence as a material substance to be scraped and harmonized. The duo spun a full narrative from fragmentary impulses, and by those gave the illusion of stasis. While a fulcrum was never audible between them, wandering instead in the shadows of skyward wingspans, it nevertheless felt as close to heart as the solemnity sharpening its apex. And, like the Elliott Carter piece with which the set ended, it was as much about buoyancy as restraint. Either way, it pulled the dislocated shoulder of reality back into place, if only for a little while.