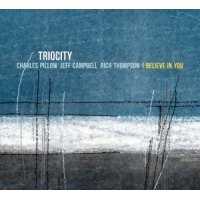 Here's a formula we've all seen before: take three musicians and let them loose on a program of standards and Great American Songbook chestnuts. It sounds all too simple and pedestrian, right? Guess again. When you're talking about the combined creative forces of multi-reedist Charles Pillow, bassist Jeff Campbell, and drummer Rich Thompson, the potential of said endeavor changes drastically. The whole is most certainly greater than the sum of its parts when those musicians come together as Triocity, and being that those three parts are rather impressive on their own, that's really saying something.

With I Believe In You, Triocity invests itself fully in the art of interpretive expression. The material the group chooses to work with is most certainly over-ripe in nature, having been covered ad infinitum, but songs like these never go out of style. The seeds of success are set into each one—there's a reason they're so durable—and it's simply up to the musicians to sow and cultivate those seeds. These three have no problem doing that, speaking to each song's strengths.

The title track serves as a portal into one facet of Triocity's identity, injecting a dose of nervous energy into the air. Pillow's alto saxophone is firm and dynamic in nature, Campbell's bass is filled with boundless energy, and Thompson, shifting between a hyper Mozambique-esque groove and driving swing, serves as the high horsepower engine behind it all. Whether working with bebop, Broadway, pure beauty, or seductive sentiments, these three have it down. Charlie Parker's "Quasimodo" opens on a unison head from Pillow and Campbell before the former takes the lead, "Just In Time" is bright and gay in spirit and sound, "Skylark" retains its breeziness while shedding any unnecessary trappings of nostalgia, and "Slow Hot Wind," dedicated to the late Gerry Niewood, sways with a quiet intensity, brought out to its fullest through a bass flute lead.

Pillow, to a certain extent, winds up serving as the de facto leader in sound here—horn players can't help it in piano-less trios, can they?—but his arsenal of instruments doesn't tell the whole tale. Campbell steps up to the plate as storyteller and soloist, Thompson gets his trades in, and all three men click in all the right ways. Triocity sells itself by simply taking classic material and going to town with it. That concept doesn't work for everybody, but it most certainly does for this group.

I Believe In You; Invitation; Trinkle, Tinkle; Quasimodo; Just In Time; Skylark; There Will Never Be Another You; Slow Hot Wind; Donna Lee; Cherokee.