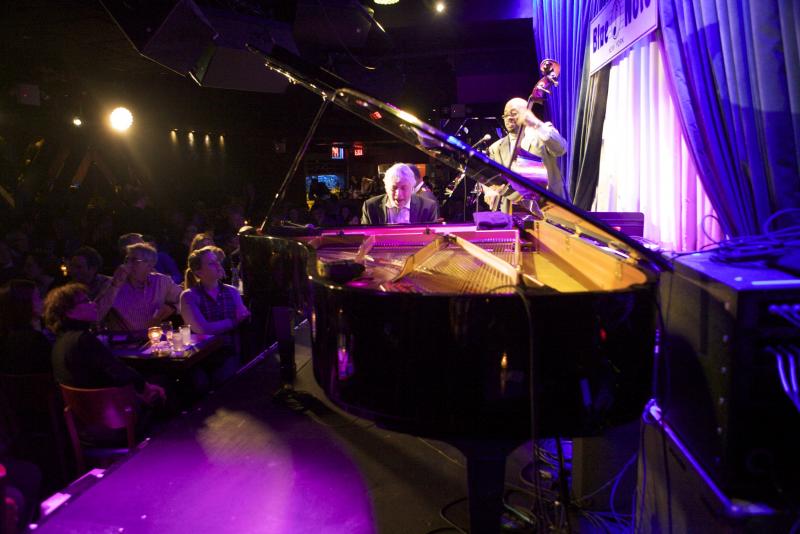 view slideshow
BY BOB KENSELAAR
March 19, 2012
Sign in to view read count
Monty Alexander: 50 Years in Music & 50 Years of Jamaica
The Blue Note
New York, NY
February 20-March 4, 2012
Monty Alexander set out an ambitious agenda in trying to showcase all the many facets of his 50-year career in music during this two-week stint at the Blue Note. The pianist sure delivered, though, judging by three shows that featured Alexander side-by-side with several of his many collaborators over the years—some of the top names working in jazz and reggae.
February 21: Triple Treat Revisited
Two nights in the series were dubbed "Triple Treat Revisited," a reference to the trio consisting of Alexander, bassist Ray Brown, and guitarist Herb Ellis, who met up in the late 1970s and performed and recorded together under the name Triple Treat. Alexander mentioned how fondly he remembered the trio's performances at the Blue Note some 30 years ago, and introduced his two collaborators for the early show on February 21—Russell Malone on guitar and Christian McBride on bass—as being perfectly suited to fill the roles of the two other original members, both of whom have passed away within the last decade.

Malone—clearly in the top echelon of today's jazz guitarists—joined Alexander and Brown on a CD entitled Ray Brown, Monty Alexander, Russell Malone (Telarc, 2002), which turned out to be Brown's last recording. Alexander described how important Brown was as an influence on jazz bassists of his generation when he introduced Christian McBride as, essentially, Brown's figurative heir, or as the pianist put it, "Ray Brown's son—plus!"

The set opened with "I Got My Mojo Working," with Alexander's playing a bit of barrelhouse, which ultimately led to rich harmonies and intricate bebop lines. McBride played a wonderfully constructed solo, setting out in his first chorus with impressive melodic lines and following up with a second chorus building on those ideas in long runs of sixteenth notes covering the full range of his instrument.

In the second tune, Miles Davis' "Freddie the Freeloader," Malone started out with some especially solid swing comping that brought to mind the Basie guitarist Freddie Green, and then ventured out into to his own unique bebop voicings. Later in the tune, McBride and Alexander found themselves playing the same long riff in unison, thanks to an uncanny a mix of telepathy and sheer coincidence, as reflected in their bright smiles of surprise. Alexander took a very playful approach to the out chorus of the tune, almost caricaturing the playing of famous Miles Davis pianists, sounding out some lush diminished chords á la Bill Evans—played with more than a little bit of irony—and then bringing to mind Wynton Kelly and Red Garland. Alexander finished off the selection with a flourish by reaching into the piano and strumming its strings like a harp.

Other songs in the set included "Don't It Make My Brown Eyes Blue," "In the Wee Small Hours of the Morning," and "Fly Me to the Moon," with a novel introduction where the trio traded fours before getting to the melody. There were two other standouts, tunes closely associated with the original trio. One was the Flintstones theme, the rhythm-changes romp recorded on the first Triple Treat CD (Concord, 1982), with a fine arco solo by McBride which included a funny quote from "Surrey with the Fringe on Top." The other was Brown's composition, "Reunion Blues," the closer, which Alexander told me after the set was something of a theme song for the group. 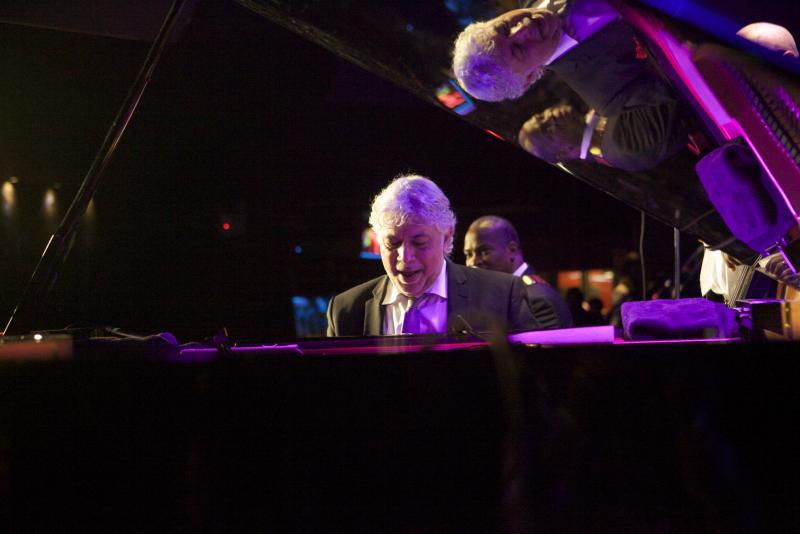 February 25: Ivory and Steel: A Jazz Tribute to Trinidad For another pair of evenings in the two-week series, Alexander reached back to another special collaboration during his career, his Ivory and Steel band, which toured together in the 1980s and recorded two CDs, both on the Concord label Ivory and Steel(1980) and Jamboree (1988). As Alexander explained, the "ivory" in the name referred to the keys on the piano, and the "steel" referred to the steel drum. The latter, also known as steel pan, an especially critical element in the sound of the group, was played by one of the pioneers on the instrument in jazz, Othello Molineaux, known for his long collaboration with Jaco Pastorius. Joining Alexander and Molineaux were two other original members of the Ivory and Steel band, the bassist and long-time Alexander associate J.J. Shakur and percussionist Bobby Thomas, also known as Bobby T., who shares Molineaux's connection with Pastorius through his work with Weather Report in the 1980s. Rounding out the band were Etienne Charles, the young jazz trumpet player who, like Molineaux, hails from Trinidad, and drummer Herlin Riley, who performed with Alexander and Shakur in a trio setting on Uplift! (Retrieval, 2011), a CD that got considerable airplay on jazz radio in the past year. Alexander pointed out the flags from Trinidad and his own native Jamaica, draped over the piano, that represented the musical direction for the evening. The set opened up with the rhythm section alone— piano, bass, drums, and percussion—playing a lively island number that at one point morphed into "Day O," the Harry Belafonte vehicle.

It also included a nice contrasting swing chorus and a spectacular, extended hand drumming workout by Thomas on his array of instruments: bongos, congas, agogo bells, an electronic pad, and a crispy crash cymbal set high up, a full arm's reach away, that he'd dramatically slap from time to time throughout the set. The second number included Alexander mischievously sprinkling in several quotes from a range of sources, among them "Peter and the Wolf" and Sam Cooke's "Chain Gang," and also featured a fine bass solo by Shakur with deft double stops here and there.

Molineaux and Charles then hit the stage and the full band set off on an arrangement that mixed together Miles Davis' "Impressions" and "So What"—a selection that appeared on the first Ivory and Steel CD. A ballad followed, "Sugarloaf at Twighlight," an original composition by Alexander. Molineaux showed off his superior command of the steel drum, as his sound lent the perfect coloring for the calypso-jazz fusion Alexander was aiming for. Charles' contributions on trumpet added something fresh—a young, hip take on bebop, mixed with tasty little flavorings from Trinidad.

Alexander then talked a bit about the importance of calypso singers Lord Kitchener and The Mighty Sparrow, and introduced one more addition to the ensemble at the Blue Note, a Trinidadian singer who carries on the traditions of his predecessors, Designer (also known as Keith Prescott). The singer showed a mix of his calypso roots, soca, soul, and jazz with "This Bebop Music," which featured Charles starting off on ukulele and then working in a fitting quote from Charlie Parker's "Anthropology" in his trumpet solo. The singer and the full band rounded out the set with a Mighty Sparrow tune, "Rose," and the Jamaican folk song, "Linstead Market." 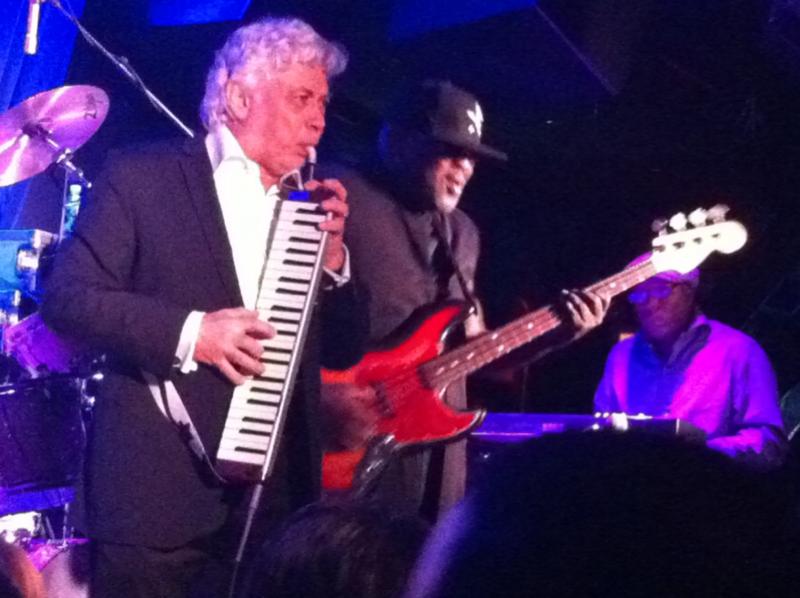 March 1: Jazz Meets Reggae and Dub with Robbie Shakespeare Alexander brought the Blue Note down to his home in Jamaica, showcasing another side of his eclectic career with two nights devoted to a mix of jazz, reggae and dub, and featuring one of the godfathers of the latter two genres, Robbie Shakespeare. Playing his well-worn vintage red Fender jazz bass, he lent a particularly commanding presence throughout the evening. One half of the renowned team of Sly and Robbie, Shakespeare is said to have played on or produced some 200,000 recorded tracks together with his partner Sly Dunbar over the last twenty years. Dunbar was also originally scheduled to appear both nights at the Blue Note but couldn't make it. Karl Wright, a veteran musician from Montego Bay, filled in more than ably on drums and was joined by Earl Appleton on keyboards and Robert Brownie on guitar. In addition to his work on piano, Alexander performed on melodica—used with some frequency in reggae—and he fondly described how he came to play the instrument as a young boy after failing to get the hang of an accordion that his father gave him.

The band put in solid, rocking performances on the two jazz standards in the set, Joe Zawinul's "Mercy, Mercy, Mercy," and Ramsey Lewis' "In Crowd." On the second tune, Alexander took a good deal of inspiration in his solo from Wright's drumming, mirroring the rhythms in his playing and using a strong, percussive attack the piano. Both songs appear on the CD Monty Meets Sly and Robbie (Telarc, 2000).

"King Tubby Meets the Rockers Uptown," a tribute to one of the pioneers of dub (aka Osbourne Ruddock), featured Alexander on melodica. It was followed by a tune that started out with a playful boogie woogie introduction by the pianist that had the audience wondering where he was going until he segued into Bob Marley's "Lively Up Yourself."

Alexander talked a little bit about Jamaican musical genres and his own other influences—from ska and rocksteady to Louis Armstrong and Nat King Cole—leading into his introduction of the guest vocalist for the set, Bitty McLean, saying that the singer had a firm grounding in all these traditions. McLean is a strong reggae singer who hails from London and charted three top ten hits in the U.K. during the 1990s. Among these hits was a cover of the Shirelles' "Dedicated to the One I Love," which he performed with the band and brought on an unusual occurrence at the Blue Note—just about everybody in the audience was up on their feet dancing. The dancing kept going through much of the rest of the set, which included Barrington Levy's "Shine Eye Girl," and a medley of Marley's "Everything's Gonna Be Alright" and "No Woman No Cry."

The rest of the series had much to offer, notably Alexander's most recent band, the Grammy-nominated Harlem-Kingston Express, which was on for the opening night and the last two. A show dubbed "A Night at Jilly's" reflected the mood of the New York nightclub where Alexander had a three-year-long stay and featured vocalists Dee Dee Bridgewater and Freddy Cole. Another night was a reunion for Alexander with bassist John Clayton and drummer Jeff Hamilton, who performed together on an important recording in the pianist's career, The Monty Alexander Trio: Live at the Montreux Festival (MPS, 1976). That Montreaux reunion also featured Diana Krall making a surprise appearance, singing an especially swinging version of Fats Domino's "I'm Walkin.'" Other special guests included organist Dr. Lonnie Smith and guitarist Pat Martino playing with Alexander's Uplift! trio, reggae singer and rapper Shaggy, and reggae fusion singer-songwriter Diana King. Overall, though, the series didn't get anywhere near giving the feel of a revolving door of all stars from the past. Instead, it was a thoughtfully planned and wonderfully executed retrospective on the many individual chapters of Alexander's career. The pianist's playful and joyous approach to music set the tone throughout, and he served as a gracious host, clearly grateful for the many opportunities he's come across over his 50 years in music.