By Ian Patterson
November 12, 2014
Sign in to view read count 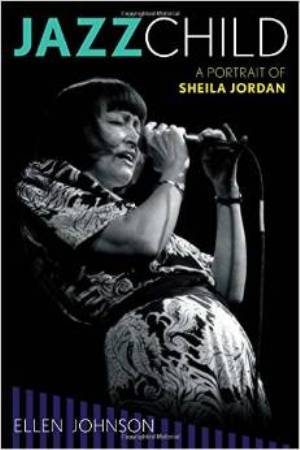 That Ellen Johnson's revealing portrait of Sheila Jordan is the first full biography of the eighty five-year old Pennsylvanian-born singer reaffirms the notion that the dominant jazz narrative has always lionized certain artists to the exclusion of others.

As the progenitor of the bass and vocal duo Jordan was an innovative figure from the get go. Instigator of arguably the first solo jazz vocal program in America in the late 1970s and one of the finest exponents of scat that's ever drawn breath, Jordan's influence as a creative musician and educator has been significant yet until quite late in her life, undervalued.

Jordan's rightful place in the annals of jazz history, Johnson notes, is in part because she "helped blaze a path for women in music during a suppressed era." That era in question was the bebop era of the 1940s and 1950s, when Jordan first set out on an extraordinary journey that has justifiably brought her comparison with Billie Holiday and Betty Carter.

Jordan's achievements, as Johnson depicts, are as much defined by the stands she has taken on basic human rights as they are for her music. As a single mother Jordan was already going against the social conventions of the time. As a partner in a mixed-race marriage and as a white singer in an Afro-American vocal trio she challenged the racial segregation and racial discrimination then rife in the United States of America.

Jordan's story is a catalog of triumphs over disasters and what comes across, perhaps even more than her resilience, is a refusal to bemoan the cards she was dealt. Abandoned by her father as a child, Jordan's mother was an alcoholic as was her grandfather who co-raised Jordan until she was fourteen. A victim of physical and emotional abuse from a number of the men in her life, Jordan has also suffered alcohol and drug addiction and racist attacks, not to mention having her house burnt to the ground by lightning. Yet, like a punch-drunk fighter who keeps beating the count, Jordan has risen above it all to become one of jazz's most important and enduring vocalists.

Johnson's biographical input is refreshingly lean, leaving the meat of the tale to the subject herself or those closest to her. We learn how Jordan grew up in poverty in a mining town where the shadow of death was never far away. The alcoholism that surrounded her growing up would eventually ensnare Jordan in adulthood but neither biographer nor subject goes into too many gory details. After all, how many falling-down-drunk stories does it take to get the picture?

Jordan beat the demon drink only then to fall for cocaine: "I just switched seats on The Titanic," she quips. That the text doesn't linger on Jordan's drug habits perhaps distinguishes this book from a raft of other music biographies but what we don't learn is to what extent, if any, Jordan's addictions affected her music and career.

As a teenager, Jordan was smitten by Charlie Parker's music: "After the first four notes I was hooked. I got goose bumps and I instantly knew that was the music I had been waiting to hear and would dedicate my life to singing." Jordan forged a birth certificate, donned high-heels and lit a Lucky Strike in a desperate attempt to enter the clubs Parker frequented in Detroit. When that failed she would hang out in the back alley—along with Kenny Burrell—to hear Parker play and she learned all his songs.

"I didn't learn the songs with the intention of becoming a professional singer," relates Jordan. "I did it because I absolutely loved the music and was compelled to learn it. I did it to keep my sanity, to keep my voice alive, and because I needed to sing this music." Jordan befriended Parker when she later moved from Detroit to New York and draws a compassionate picture of the saxophonist as a genuinely caring individual—most of the time—who turned her onto Stravinsky and Bartok.

Parker, along with a long list of bebop legends would often gather at Jordan's loft to hang out and jam in the 1950s. This is one area of the book that Johnson and Jordan could have elaborated on, given that the jazz-loft scene is always referred to as a phenomenon of the free-jazz movement of the 1970s. Similarly, we learn little of Jordan's teacher Lennie Tristano, who Jordan dropped after he advised her to leave her heroin-taking husband—and Parker's pianist—Duke Jordan.

Parker's music may have inspired Jordan and formed her language but the double bass comes across as perhaps her greatest love. From her first bass and vocal duet with Charles Mingus in 1954, Jordan pioneered the formula with a series of bass partners, from Steve Swallow and Arild Andersen to long-standing collaborators Harvie S and Cameron Brown, the latter which continues to this day. Jordan wanted her debut album Portrait of Sheila (Blue Note, 1963) to be a vocal/bass duet recording but Alfred Lion and Francis Wolff dissuaded her.

Jordan didn't release another album as leader until 1975, a gap which is not fully explained, though the necessity for Jordan of working a day-job to support her daughter was undoubtedly a factor. It wasn't until she was fifty eight years old, that Jordan threw herself into jazz singing as a full-time career. She never looked back.

Jordan has dozens of acclaimed albums to her name and many notable collaborations. Johnson's thoroughly researched biography reminds us that Jordan has worked with a surprisingly large number of jazz greats, among them Dizzy Gillespie, Cecil Taylor, Lee Konitz, Jan Garbarek, Roswell Rudd, Steve Kuhn and George Russell, to name but a handful.

Jazz Child also illustrates that Jordan has never been afraid to move outside her comfort zone. She has brought her highly emotive and uniquely compelling vocals to the poems of Robert Creeley and taken a leading role in the jazz-opera of George Gruntz and Amiri Baraka. She has recorded with string quartet and, at the age of eighty four, with a full string orchestra and big band.

Through the first-hand accounts of her musical collaborators we learn of Jordan's art. Multiple voices describe her as part of the rhythm section or as one of the soloists but always as an integral part of whatever dynamic she's a part of. Jordan's scatting is legendary as are her medleys that relate musical narratives on Parker and Miles Davis. Johnson, a professional singer herself, sums up Jordan's strengths thus: "Her use of space, inflection and gentle dynamics makes her a formidable songbird."

Johnson's biography quietly makes the case that Jordan's greatest legacy may be as an educator. "I put my heart into it," says Jordan, "the same as I do when I'm singing." Through her courses and workshops over the course of thirty five years Jordan has influenced an enormous number of singers throughout the world. As Francis Davis notes of Jordan—as quoted by Johnson—in Jazz and its Discontents "Her personal integrity has made her a role model for young women singers, including some who owe nothing to her stylistically."

Recognition has come late to Jordan but she has received a raft of awards in recent years in recognition of her talent and her contribution to jazz, culminating in her NEA Jazz Masters Award in 2012. Jordan, however, comes across as a most humble servant of the music: "Really loving the music is what counts. Loving it so much that you dedicate your life to it, whether or not you become a star, which in most cases you won't, or just sing for the joy of doing the music and keeping it alive. That's what dedication to the music means to me."

Jordan's first award came over fifty years ago following the release of Portrait of Sheila, when she won the 1963 Downbeat Critics Poll for "Talent Deserving Wider Recognition." Johnson's eloquently written, eminently readable book makes much the same case for the indefatigable Jordan, half a century on.