Home » Jazz Articles » Roseanna Vitro at Jazz at the Joint 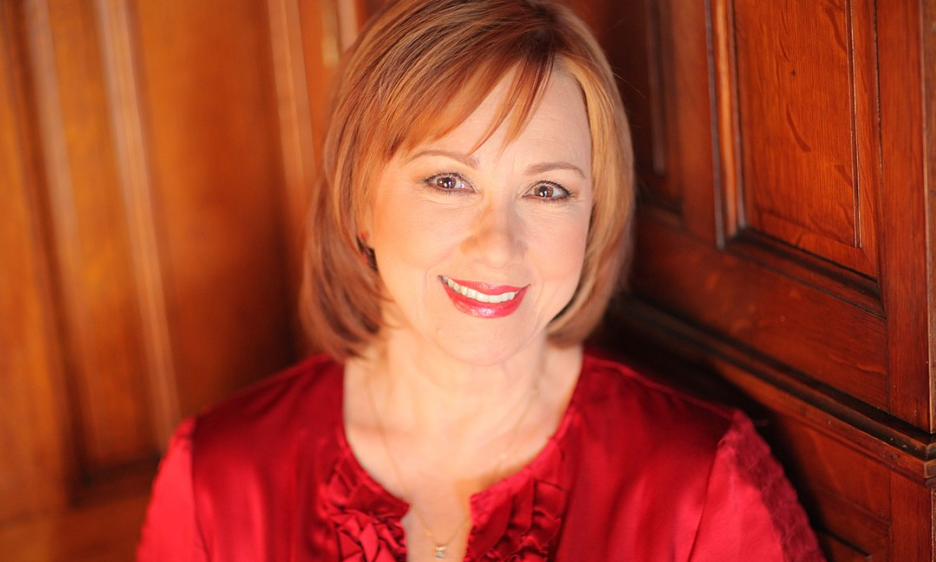 In Arkansas, when Spring smiles, she reveals a gold incisor of Summer, promising humid warmth and languid pace. So it was entering The Joint Comedy Theater in North Little Rock, on May 9. However, on the second Monday of each month, The Joint Comedy Theater transforms into Jazz at the Joint, a series presented by guitarist Ted Ludwig, who brings in top-drawer jazz performers to join him and his trio. Ludwig was part of the 2005 Hurricane Katrina diaspora who moved to Little Rock to set up shop and a residence at the Capitol Hotel with his trio that was to last until the COVID Pandemic in 2020. Now an Arkansan with a mouth full of NOLA sweetness, Ludwig takes an active role in rejuvenating the arts in central Arkansas.

Located in the Argenta Historic District, The Joint Comedy Theater is a cabaret performance space and coffeehouse, managed by the husband and wife team of Adam and Sarah Farrell, offering live entertainment and the best locally-roasted coffee in Central Arkansas. When not hosting Jazz At The Joint, the theater is residence to the comedy review, The Main Thing, The Arkansas Songwriter Showcase, and the Argenta Acoustic Music Series, as well as other events. The Theater is a quaint and intimate confine serving snacks, a large selection of craft beers, custom cocktails, and fine wines. It is a cozy space, bragging deeply of home.

This edition of Jazz at the Joint is also a homecoming for the featured artist, Roseanna Vitro. Born in Hot Springs, Vitro had an enviable exposure to a wide swath of music, deriving inspiration from gospel, rock, rhythm and blues, musical theatre, and classical music. During the 1950s, when Hot Springs was an open city, Vitro's father owned the famous Flamingo Nightclub. He loved Dean Martin's music and Italian opera, while the singer's mother's family sang gospel music. A child of the '60s, Vitro gravitated to Houston in pursuit of the blues and rock of her idols: Lightnin' Hopkins, Johnny Winter, Bonnie Raitt, and Tracy Nelson. This music proved foundational for her development. She was encouraged to delve deeply into jazz, ultimately living the music as protégé to Texas tenor man Arnett Cobb and singer-educator Ray Sullenger.

In 1978, Vitro moved to New York City where she studied with Gabor Carelli, a professor from the Manhattan School of Music, and began performing with pianists Kenny Werner and Fred Hersch. She sang with Lionel Hampton and toured with him. She has appeared at The Blue Note, Iridium, Birdland, and Dizzy's Jazz Club at Lincoln Center. She appeared with Steve Allen at The Town Hall at The Apollo Theater and recorded an album of Allen's songs. In 2005 she performed and recorded with the Kenny Werner Trio at the John F. Kennedy Center in Washington D.C. Vitro hit a high-water mark with her recording The Music of Randy Newman (Motema, 2011) which received a rare 4 1/2 stars in Down Beat magazine and a Grammy nomination for Best Jazz Vocal Album in 2012. The singer's most recent recording is Sing A Song Of Bird (Skyline Records, 2021), a beautiful affair that included singers Sheila Jordan, Bob Dorough (in one of his last recordings), and Marion Cowings, alto saxophonist Gary Bartz, and pianist Alan Broadbent.

But this particular early May night was all about Vitro and her homecoming. While circuitously making her way to Little Rock, the singer stopped off in Texas to gather up two sisters and various younger relatives making the event a family affair. Her performance was in keeping with previous Jazz At The Joint performances where the concert is presented in two segments separated by a brief intermission, the first segment typically being longer than the second. The singer's recital was derived from her many recordings, beginning with a breezy island rendition of "Reza" from her recording Tropical Postcards (A Records, 2004). After a solid "Blue Skies," Vitro dug deep on Bill Evans' "Funkallero," before addressing her new Sing A Song Of Bird with "Grapple From The Apple" with lyrics penned by noted sound engineer and husband Paul Wickliffe, delivered with an anti-bebop laconic flair. Her cover of Betty Carter's "Do Something," from Live At The Lincoln Center (Challenge Records, 2006), was saucy and ripe.

Ludwig led his long-standing trio of bassist Joe Vick and drummer Brian Brown. This unit has been a part of the Little Rock landscape for 20 years, long enough to be taken for granted. So integrated are the creative personalities in this band, they rival great trios of the past like that of Bill Evans and Oscar Petersen. A perfect fit for Vitro, whose chops, reputation, and loving presence were enhanced by the collaboration.

After a brief intermission, the group returned with a brief set highlighted by a somber "Willow Weep For Me," featuring bassist Joe Vick (who must receive major kudos for all of the well-deserved feature time he had). Perhaps the show highlight was Vitro's nod to another Arkansan, Bob Dorough, whom she honored by a rousing performance of his touchstone, "Devil May Care." Vitro and the band closed with Oscar Brown, Jr. "Long As You're Living," in a nod to Abby Lincoln, demonstrating Vitro's innate talent and generosity to all. A local affair, a family affair, Roseanna Vitro's performance underlines that there really is no place like home.

Reza; Blue Skies; Funkallero; Grapple From The Apple; Do Something; intermission; Laughing At Life; Willow Weep For Me; Devil May Care; Long As You're Living.