For over 40 years, Johnny Winter has been a guitar hero without equal. Signing to Columbia records in 1969, Johnny immediately laid out the blueprint for his fresh take on classic blues a prime combination for the legions of fans just discovering the blues via the likes of Jimmy Page and Eric Clapton. Throughout the '70s and '80s, Johnny was the unofficial torch-bearer for the blues, championing and aiding the careers of his idols like Muddy Waters and John Lee Hooker.

Though now residing in New England, Winter remains a native Texan, born and bred in Beaumont, the town where the famous Spindletop gusher came in to kick off the "black gold" rush in 1901.

Growing up in rough-and-tumble town populated by oilfield wildcatters and shipyard workers, he spent long hours listening to a local deejay named J.P. Richardson - The Big Bopper of "Chantilly Lace" fame - and became hooked on 50's rock & roll. He formed his first band, Johnny and the Jammers, in 1959 at the age of 15, with his 12-year-old brother Edgar on keyboards.

Racial tensions in Beaumont were still high in those days. The town had been side to one of the worst race riots in Texas history just nine months before Johnny's birth. Mobs wandered the streets, businesses burned, martial law went into effect, and more than 2,000 uniformed National Guardsmen and Texas Rangers sealed off the town from the rest of the world until tempers cooled. Despite the brutal legacy, Johnny remembers never hesitating as a kid to venture into black neighborhoods to hear and play music.

Looking back, he believes people in the black community knew that he was sincere, that he was genuinely possessed by the blues. "Nothing ever happened to me. I went to black clubs all the time, and nobody ever bothered me. I always felt welcome." He also became friends with Clarence Garlow, a deejay at the black radio station KJET in Beaumont. Who opened Winter's eye's and ears to rural blues and Cajun music. Clarence, who recorded for the swamp boogie specialty label Goldband, KRCO, Frolic, Diamond, Moon-Lite, Hall-Way and other regional labels.

There's a famous story about a time in 1962 when Johnny and his brother went to see B.B. King at a Beaumont club called the Raven. The only whites in the crowd, they no doubt stood out. But Johnny already had his chops down and wanted to play with the revered B.B."I was about 17," Johnny remembers, "and B.B. didn't want to let me on stage at first. He asked me for a union card, and I had one. Also I kept sending people over to ask him to let me play. Finally, he decided that there enough people who wanted to hear me that, no matter if I was good or not, it would be worth it to let me on stage. He gave me his guitar and let me play. I got standing ovation, and he took his guitar back!"

Winter's big breakthrough came a few years later in 1968 when Rolling Stone writers Larry Sepulvado and John Burks featured him in a piece on the Texas Music scene, which prompted a bidding war among labels that Columbia eventually, won.

Johnny's self-titled 1969 disc announced loudly that there was a new guitar-slinger on the new national scene. The disc included audacious covers such blues classics as B.B. King's "Be Careful with a Fool," Sonny Boy Williamson II's "Good Morning Little School Girl," Robert Johnson's "When You Got a Good Friend" and fellow Texan Lightin' Hopkins' "Back Door Friend." It also featured two prime original Winter songs, "Dallas"and the controversial "I'm Yours and I'm Hers," that went into heavy rotation on FM underground radio.

The album peaked at No.24 on the billboard chart and was promptly followed by “Second Winter” later that same year. Looking back, writer Cub Koda described the period as one when "Straight out of Texas with a hot trio, Winter made blues-rock music for the angels." That trio, by the way, included bassist Tommy Shannon who would go on to be part of SRV's Double Trouble and drummer Uncle John Turner.

Winter stayed with Columbia and it's boutique Blue Sky label for more than a decade, turning out such well-received platters as "Johnny Winter And" (1970), "Still Alive and Well" (1973) and "John Dawson Winter III" (1974). He also helped to introduce blues giant Muddy Waters to another generation of listeners by producing and playing guitar on the Grammy-winning "Hard Again" (1977), as well as the Grammy-nominated "I'm Ready" (1978), Muddy "Mississippi Waters Live" (1979) and "King Bee" (1981). The collaborations were so successful that Waters took to referring to Johnny as his "adopted son"!

”The Winter of '88” on the MCA-distributed Voyager label shows Winter experimenting with a more contemporary flavored sound. Johnny is inducted into the Blues Foundation Hall of Fame.

Winter returns to his blues roots with a vengeance in 1991. His Grammy-nominated “Let Me In” marks a powerful debut on the Pointblank label. This CD boasted guest appearances by Dr. John and Albert Collins. Other tracks include Winter?s own title tune and his equally stand-out "If You Got a Good Woman," as well as Dr. John?s "You Lie Too Much" with the good doctor on ivories.

Winter in ‘93 performs on “Highway 61 Revisited,” a highlight of Bob Dylan's 30th anniversary tribute released by Columbia Records on CD and video.

”Live in New York City '97,” Winter's third Pointblank record, offers a scorching collection of concert favorites. The first album of new Winter material in five years. Live in NYC '97 was recorded at New York's Bottom Line in April 1997. The songs were selected by members of Winter's fan club. The entire album is intended as a gesture of gratitude by Winter to his many fans worldwide.

In 2005, Johnny and Edgar Winter inducted into the Southeast Texas "Walk of Fame" at Ford Park in their home town of Beaumont, Texas for their contributions to music and career accomplishments.

The Texas guitar tradition runs deep. A gutsy school of blues playing, marked by thick tones, aggressive attack and tons of technique, all delivered in a flamboyant, swaggering style that is endemic to the Lone Star State. From T-Bone Walker and Clarence Gatemouth Brown on through Albert Collins and Freddie King, Billy Gibbons and the late Stevie Ray Vaughan, the tradition of the Texas guitar slinger has lived on. The one name that ranks at the top of that exclusive list is Johnny Winter, an international ambassador for rocking Texas blues and still going strong! Show less 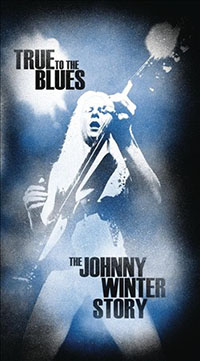 All About Jazz musician pages are maintained by musicians, publicists and trusted members like you. Interested? Tell us why you would like to improve the Johnny Winter musician page.