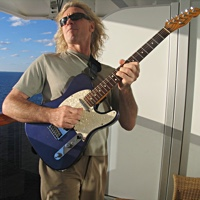 I am passionate about improvisation in all styles of music. This is my love, my joy, my high in life. I get the most satisfaction from this aspect of my live performances. The creativity experienced, especially when I’m “on,” is something I don’t experience in normal everyday life.

I had been playing the guitar for a couple of years as kid and was just starting to listen to Santana, Johnny Winter, Led Zeppelin and The Allman Brothers when one of my friends mentioned that the guitarists were making their solos up on the spot. That just floored me, I couldn’t believe it! I knew right then and there that I had to be able to do that too; thus starting my lifelong quest to perfect the art of improvisation on the guitar.

Beginning with garage/basement bands, my friends and I got together and jammed for hours at a time on modal one chord jams, simple progressions and blues. Later on, as I developed my skills, I moved into progressive rock, fusion and funk, and eventually be-bop influenced jazz. Along the way I also picked up skills in Country, Classical, Latin, African and other various ethnic music and hybrid styles.

It is from these sources as well as my life experiences that I draw my inspirations from when I improvise a solo.

“Fitchett’s electrifying personality literally jumps through his fingers and on to his strings as he draws on the multitude of styles in his well-stocked arsenal of musical weaponry, while setting the room on fire with his inspired improvisational forays.”

“Fitchett is by far one of the best improvisors in the blues and jazz genre, Amazing!”

”Listening to Mark Fitchett play the guitar is like hearing the history of the electric guitar in a single artist. Inhabiting the space between jazz, rock, and blues, his playing exemplifies the best of each world while emphasizing his own unique approach and personality.”

“Fitchett’s electrifying personality literally jumps through his fingers and on to his strings as he draws on the multitude of styles in his well-stocked arsenal of musical weaponry, while setting the room on fire with his inspired improvisational forays.”

“Fitchett is by far one of the best improvisors in the blues and jazz genre, Amazing!”

-Composition CSULB -Guitar, Composing and Arranging Dick Grove School of Music -20 years of Jazz Guitar study with Ted Greene Beginner through advanced levels of Jazz, Blues and Rock guitar. A studio in Long Beach and in Redondo Beach. Rates are $60 per hour.

All About Jazz musician pages are maintained by musicians, publicists and trusted members like you. Interested? Tell us why you would like to improve the Mark Edward Fitchett musician page.