Ted Greene began his own guitar studies at age 11, and was an accomplished player while still in high school, often collaborating with local R&B groups; he briefly studied accounting at Cal State Northridge, but soon dropped out to devote all of his energies to music.

While Greene is often regarded as a jazz musician, he played many musical styles. He was known to guitarists due to his role as a music educator, which included private teaching, seminars at the Guitar Institute of Technology, columns for Guitar Player magazine, and his series of instructional books on guitar harmony, chord melody and single-note soloing. A voracious reader of almost any book on music theory, especially from the 'Common Practice Period' (circa 1600-1900) he distilled very complex concepts regarding the structure of western music, and would write out more accessible versions for students to understand (handed out to students in the form of lesson "sheets"), often applying keyboard concepts to the guitar. For example, many transcriptions of the Chorals of J.S. Bach would be re-written for guitar, along with useful analysis applicable to any musical setting, such as Jazz and other styles.

While somewhat rare, he would also make occasional live appearances in clubs in the San Fernando Valley, usually playing a Fender Telecaster.

Greene typically worked as an accompanist behind vocalists, because he found group settings restrictive. While he was a sought-after session player, he derived much of his income from tutoring, ultimately writing four books on the subject: Chord Chemistry, Modern Chord Progressions: Jazz and Classical Voicings for Guitar, and the two-volume Jazz Guitar: Single Note Soloing.

His playing style included techniques such as harp-like harmonic arpeggios, combined with gentle, tasteful neck vibrato,creating a "shimmer" to his sound. Other notable techniques included playing songs with a "walking bass" line with simultaneous melodies. Greene used counterpoint to improvise in a variety of styles, such as playing a jazz standard such as Autumn Leaves in Baroque style. He used a large variety of chord voicings, often creating the effect of two simultaneous players.

He recorded one album "Solo Guitar" in 1977, and although respected by guitarists, he was not well known to the public. The recording, which was originally released in 1977 on PMP Records contains no "over dubbing" (multiple track recording). Guitar virtuoso Steve Vai has praised Greene's musical knowledge and perceptiveness on this recording, stating that Greene "...is totally in touch with the potential of harmonic constructions" which allows him to create an "...organic and inspired listening delight."[1] Josh Gordon from Just Jazz Guitar Magazine stated that the recording has a "...feeling of perfect proportion" and a "full spectrum of emotion and harmonic vision." Steven Rosenberg from the Los Angeles Daily Newspaper stated that "Greene managed to raise the bar for solo guitar."[2]

Greene helped Fender design a 1952 Telecaster vintage reissue (their first such reissue) by making reference to his collection of old Telecasters, Broadcasters and Nocasters. Greene died in his apartment in Encino, of a heart attack at age 58. Over 700 of his friends, former students and other musicians attended his memorial. Ted is survived by his long time life partner and soulmate, Barbara Franklin who is organizing and archiving his written notes on music and guitar playing. Show less

Ted Greene's legendary "Solo Guitar" album, first released on LP in 1977, has been an inspiration to fingerstyle Jazz guitarists for over a quarter century. By the recent release of this album on compact disc, Art of Life Records has added to its already impressive catalog of Jazz guitar music. The nine songs on the album are all perfectly realized gems of tasteful and inspired Jazz guitar playing, so beautiful and fresh sounding even after all these years. There's a feeling of perfect proportion, characteristic of much great art and music. A full spectrum of emotion and harmonic vision is expressed, in a very inviting and rewarding manner. - Josh Gordon - Just Jazz Guitar Magazine

Ted Greene's legendary "Solo Guitar" album, first released on LP in 1977, has been an inspiration to fingerstyle Jazz guitarists for over a quarter century. By the recent release of this album on compact disc, Art of Life Records has added to its already impressive catalog of Jazz guitar music. The nine songs on the album are all perfectly realized gems of tasteful and inspired Jazz guitar playing, so beautiful and fresh sounding even after all these years. There's a feeling of perfect proportion, characteristic of much great art and music. A full spectrum of emotion and harmonic vision is expressed, in a very inviting and rewarding manner. - Josh Gordon - Just Jazz Guitar Magazine

Chances are that most Jazz fans may not have heard of Jazz guitarist Ted Greene, though it is not for his lack of abilities. One of a handful of players able to command attention during an album's worth of unaccompanied performances, Greene evidently has not pursued many recording opportunities following this 1977 debut, which was first issued by the PMP label. Like Joe Pass, Bucky Pizzarelli, Martin Taylor, and a few other guitar masters, Greene is adept enough to accompany himself by playing a melodic line and supporting rhythm, such that novices will think they are listening to two guitarists. Most of this session is devoted to standards like "Ol' Man River," "Just Friends," and a medley of "Summertime" and "It Ain't Necessarily So," all played with finesse and imagination. He avoids the hackneyed approach to songs of more recent vintage, such as "Send in the Clowns" and "Watch What Happens," by utilizing creative voicings. This session was finally reissued in 2004 by Art of Life Records, and it is a mystery as to why Ted Greene hasn't been heard from since the recording was originally made. He is long overdue to make a follow-up. Highly recommended. - Ken Dryden - All Music Guide

A very well respected guitarist and music educator who occasionally plays Sunday brunches at Spazio's, Ted Greene has long been considered an underground legend. It seems strange that thus far he has only recorded one album as a leader. Greene performs a set of standards as unaccompanied electric guitar solos. Sometimes his chord voicings and one-man orchestra approach recalls the late George Van Eps although his sound and style differ a bit. Greene always keeps the melody in mind during tasteful renditions of such pieces as "Danny Boy," "They Can't Take That Away From Me," "Just Friends" and a medley of "Summertime" and "It Ain't Necessarily So" while occasionally showing glimpses of his virtuosity. Solo Guitar is recommended. But when will volume two finally be recorded? - Scott Yanow 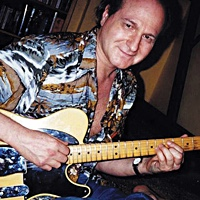 All About Jazz musician pages are maintained by musicians, publicists and trusted members like you. Interested? Tell us why you would like to improve the Ted Greene musician page.