Jazz singer Marion Cowings is a native New Yorker. His smooth baritone voice and considerable range has been delighting audiences around the world for decades. Mentored by the legendary Jon Hendricks, Cowings is a master of scat and vocal technique. He has appeared at the Lincoln Center, Kennedy Center, Blue Note, Village Vanguard, and as well as many prestigious venues abroad. Currently Cowings performs regularly at Small Jazz Club in the West Village.

Cowings grew up in the South Bronx where his father was a merchant and his mother taught public school. He attended Music and Art (now LaGuardia High School), where he was chosen to perform as a solo vocalist with the New York Philharmonic under the direction of Leonard Bernstein. In the same year, at the age of fifteen, Cowings discovered the bebop group Lambert, Hendricks and Ross. While still in high school, his classmate Eddie Gomez (now a formidable bassist and Bill Evans collaborator) played with Jon Hendricks and spoke highly of Cowings. Hendricks called Cowings and said “I hear you’re doing my stuff…. meet me outside Birdland and we’ll talk.” Soon afterward Hendricks set up Cowings’ first professional engagement at the Randall’s Island Jazz Festival with “Little Pony” Poindextor and the Ike Isaac’s Trio. He also began to understudy Lambert, Hendricks and Ross, and eventually became Dave Lambert’s original replacement.

In 1984 after leading rhythm & blues and rock bands, Cowings teamed up with jazz vocalist Kim Kalesti. Kalesti and Cowings headlined the Berlin Jazz Festival and the Blue Notes in New York and Japan. They starred in Lincoln Center’s Meet the Artist and performed hundreds of concerts through the auspices of the Young Audiences in New York City public schools. In addition to recording two albums on the Emarcy Label, they have played with many musicians including Clark Terry, Jimmy Heath, Frank Foster, Gary Bartz, Bobby Watson, Ron Carter, Howard Johnson, and the Thad Jones-Mel Lewis Orchestra (now known as Village Vanguard Orchestra). Together they founded the Vocal Jazz Department at New York University and were adjunct professors for eleven years.

Cowings’ Off-Broadway credits include Forever Swing and Bebop. He was a lead in “Queenie Pie,” a Duke Ellington Opera directed by Mercer Ellington at Lincoln Center. Recently, Marion headlined the Harry Warren Lyrics and Lyricists Program at the 92nd Street Y alongside Margaret Whiting and Mary Cleere Haran. He was also a lead in the hundredth anniversary tribute to Count Basie and Glenn Miller at the Lucille Lortel Theater, both directed by Mercedes Ellington.

Involved in commercials, voiceovers and jingles, Cowings received the advertising industry’s Clio Award with one of his mentors, Hal Schaeffer. He is a recipient of a National Endowment for the Arts grant and a published lyricist with Quincy Jones, Wayne Shorter, Frank Foster, and Sonny Rollins. Show less 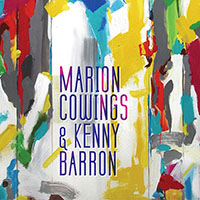 All About Jazz musician pages are maintained by musicians, publicists and trusted members like you. Interested? Tell us why you would like to improve the Marion Cowings musician page.