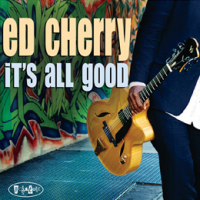 Guitarist Ed Cherry is best known for his lengthy, decade-plus tenure with trumpet titan Dizzy Gillespie, but his work with another heavyweight of a different ilk—organist Big John Patton—is a more obvious influence on It's All Good. Cherry played the important role of Patton's guitar-playing foil during some of the legend's '90s comeback sessions and he acquired a deep understanding of the organ group dynamic through osmosis during this period.

Patton's '90s work dealt with some outlying ideals—courtesy of musicians like saxophone maverick John Zorn—blended with a more straightforward approach, but Cherry doesn't flirt with far-reaching thoughts like his former employer. Instead, he puts his Grant Green-influenced guitar to good use on a program of relatively laid back material that emphasizes soul and groove in centrist fashion.

Cherry's slick-cum-sizzling finger work is ever-impressive throughout this program of smartly reworked covers and originals. He brings a sly sound to "You Don't Know What Love Is," delivers a Brazilian-tinged take on "Blue In Green," gives Thelonious Monk's "Epistrophy" a smoking, streamlined reading and turns Herbie Hancock's "Maiden Voyage" into a mid-tempo swinger. Elsewhere, Cherry hits a Wes Montgomery-like stride ("Something For Charlie") and revels in the warm beauty of Duke Ellington ("In A Sentimental Mood").

His comrades—organist Pat Bianchi and drummer Byron Landham—both prove to be well-suited for this session, as they're willing to lead or follow and able to go wherever the moment takes them. Bianchi is capable of extreme subtlety, as demonstrated with his gentle backing on "In A Sentimental Mood," but his skills don't stop there. He can cook with the best of them ("Something For Charlie") and he has a penchant for cut-to-the-core melodic delivery that's exhibited during a pair of Wayne Shorter tunes ("Deluge" and "Edda"). Landham, who earned his organ group stripes with Joey DeFrancesco and several other high profile players, is the consummate groove maker here, delivering waltz time wonders ("Edda"), Brazilian beats ("Blue In Green"), über-slow funk ("Chitlins Con Carne") and right-down-the-middle swing with equal skill. His solo trading, on display in several places, is crisp, classy and highly entertaining.

Cherry and company don't distinguish themselves by doing anything bold or new on It's All Good, but they make this a memorable outing through the sheer force of musicality and taste; the title doesn't lie on this one.