BY GEANNINE REID
October 25, 2012
Sign in to view read count 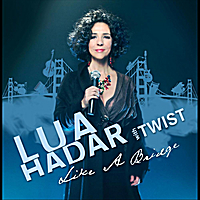 Singer Lua Hadar her band Twist have aptly come up with Like a Bridge, a bold, worldly musical venture with multiple lingual selections and styles. Hadar's grasp of various languages and vernaculars is vast, singing in English, French, Spanish, Japanese, Portuguese, Italian and Malagasy. What is more impressive is her command of each of the seven dialects' dictions and supple inflections within the musical selections, and her phrasing of each melodic line.

"Bridge over Troubled Water" begins with Larry De La Cruz's warm alto saxophone lines globetrotting over an easy straight-eight pulse, leading to Hadar's entrance. Hadar has a warm voice and likes to end her phrases with a fair amount of vibrato, giving each cut a classic sound. Pianist and musical director Jason Martineau does a great job of creating a solid fabric of jazz-themed, cosmopolitan world music throughout the release, complementing Hadar's voice and linguistics; musically his arrangements are the bridge to a cohesive listening experience.

An interesting funk version of "San Francisco," with Hadar singing in French, is a nice romantic twist to this classic, well-known melody. Antonio Carlos Jobim's "Imagina," is a conveyed as a waltz sung in Portuguese, its wide vocal range usually covered with a male-female duet. Here, however Lua's duet is with renowned cellist Emil Miland, further taking this delightful release to a place of musical twist. Hadar's vocal style on this selection is slightly more operatic, with a faster vibrato, but she navigates the wide-ranging melody with confidence.

All in all, Like a Bridge is appositely titled-a bridge of musical delight that makes a truly global journey, introducing sounds from across the beautiful palette of diversity.