By Mark Sullivan
October 3, 2021
Sign in to view read count 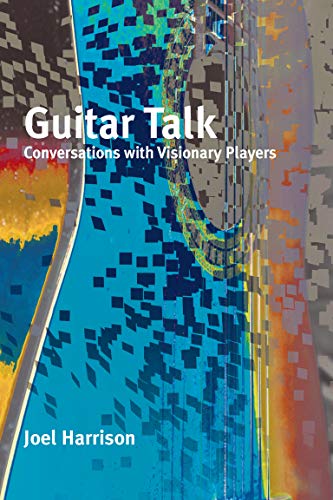 As founder of the Alternative Guitar Summit, guitarist/composer Joel Harrison has gotten to know a lot of adventurous contemporary guitarists: this book collects far-ranging conversations with twenty-seven of them. In fact, several of these conversations actually took place onstage during the Summit when the guitarists were either performers or honorees (every year a living guitarist/composer is honored). In each interview Harrison makes sure to cover some common topics like how they became guitarists, musical influences, career highlights, and career twists and turns. But each of the guitarists has their own unique story to tell as well, so the narrative is far from predictable.

The first few interviewees could reasonably be described as elder statesmen (despite Pat Metheny's eternal youthfulness!). Ralph Towner has a unique voice on nylon-string classical guitar and acoustic twelve-string guitar, and a towering reputation as a composer. He comes across as a humble guy, and has stories about playing in Oregon, his ECM collaboration with Jan Garbarek and the rest of that quartet, and playing at Woodstock accompanying Tim Harden. Fred Frith talks about his diverse background in both notated and improvised music, and the difference between improvising solo and with a group. Surprisingly, he says that he will practice piano, viola and bass— but not guitar, unless he has something specific to practice for.

Elliott Sharp and Henry Kaiser both represent the more extreme aspects of experimentalism. Yet each has his own history, with some surprises. Sharp's love of country-blues has led him to play with Hubert Sumlin, one of his heroes. Kaiser also lists Sumlin as a hero, but his most meaningful collaborations have been with Derek Bailey, Richard Thompson, Sonny Sharrock and David Lindley. Bill Frisell played in a R&B band called the Soul Merchants in high school, and his classmates included three future members of Earth, Wind & Fire! He swears that funk is in everything he plays. On a more serious note, Michael Gregory Jackson and Vernon Reid both talk about racism in the music industry, especially for Black players in the rock industry.

Sheryl Bailey talks about her dedication to the bebop language, and a bit about the difficulties of being a woman playing jazz. Nguyen Le found a way to integrate his Vietnamese heritage into an eclectic worldwide sensibility. Rez Abbasi grew up on rock music (like many of these musicians), and did not get into Indian music until after he started playing jazz—despite having been exposed to it earlier by his parents. The last few interviews all feature younger players, but even they are a diverse group: Julian Lage, Mary Halvorson, Anthony Pirog (a regular participant in the Summit, as well as being featured (along with Harrison) in the debut releases on AGS Recordings, the record label launched by the festival in 2021), Ava Mendoza and Rafiq Bhatia.

This is a rich repository of contemporary guitar lore. The title implies that it is intended for guitarists, and indeed it is hard to imagine any guitarists who would not get a lot out of it, if they have any interest in any of these players. But there is plenty here for non-guitarist fans of this music as well.