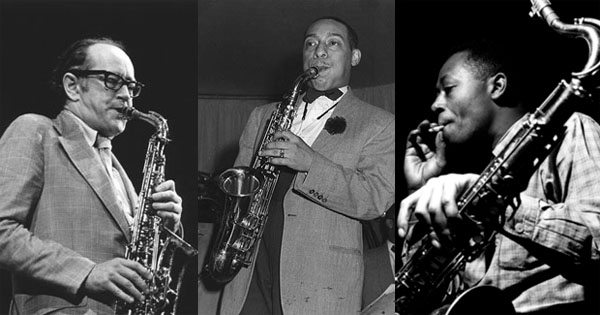 BY GREG SIMMONS
April 7, 2011
Sign in to view read count
Being a sideman can be a thankless job. Sure, you might get to play regularly, but you rarely get to call the tune. If your boss is a big star, the gig might even pay pretty well, but if the band is going to Fargo, North Dakota in January, brother, so are you, and you weren't even consulted on travel arrangements.

Whatever the drawbacks to being a sideman, there have been musicians who have nevertheless found themselves pegged in the role for the duration of their careers. These were the guys who made their names or achieved their greatest fame in other people's bands but were never able to convert that notoriety to equal success under their own monikers, despite releasing some really great music of their own that is worth hunting down.

Although, they'd already been playing and recording together for a couple of years, altoist Paul Desmond (1924-1977) probably sealed his fate as a sideman to Dave Brubeck the moment Time Out (Columbia 1959) was released, although their relationship actually began the other way around. Desmond penned the album's strongest track, "Take Five," and the record was such a huge success—and the quartet in such demand—that retaining the lineup was almost inevitable. There is a case to be made that it was actually Desmond's dry, intellectual technique that defined the Brubeck sound—a more emotive player would have completely destroyed that subtle, laidback vibe—but at the end of the day, it was Brubeck's name on the cover.

Eventually, in 1967, that version of the Brubeck band did break up, and Desmond took a hiatus from performing. By 1973, after a rest, he had signed with the CTI label and began to release a series of records under his own name, as well as working on projects with other musicians. A good example is Desmond's Pure Desmond (CTI, 1974), a quartet date featuring bassist Ron Carter, Modern Jazz Quartet drummer Connie Kay, and guitarist Ed Bickert. This is a date of standards, and Desmond's playing style isn't dramatically different from his Brubeck years, but his playing is strong, and the addition of guitar creates an altogether different dynamic in contrast to Brubeck's piano.

Eventually, Desmond did reconnect with Brubeck for a tour and album, recapitulating the greatest success either of them had known, but in the interim the saxophonist made some worthwhile music on his own.

Johnny Hodges (b. 1907) is as close to the consummate sideman as ever there was. Joining Duke Ellington's orchestra in1928 on alto sax (and occasionally soprano), he continued the association with only a few interruptions for over forty years, until his death in 1970. His tone was so deeply blue, and so emotive, that in his eulogy, Ellington described him as, "Never the world's most highly animated showman or greatest stage personality, but a tone so beautiful it sometimes brought tears to the eyes—this was Johnny Hodges."

But forty years is a long time to be a sideman, and Hodges regularly recorded under his own name, even leaving the Ellington Orchestra for a few years to set up his own outfit. Some of his records are pure Ellingtonia, but others are small combo dates that spotlight his horn in ways he could never enjoy in the big band. The small dates are, in fact, great way to go for those looking to hear the essence of Hodges' sound.

A terrific example is Buenos Aires Blues (Lone Hill Jazz, 2009). This reissue of a 1963 quintet date is all about Hodges' gorgeous, emotive alto. The songs are a mix of Ellington classics, the saxophonist's own compositions, and a pair of tracks penned by pianist Lalo Schifrin, who backs the date. Hodges' leadership is immediately solidified with the seven-note theme of his own "Mama Knows," which clearly highlights his style on during both its melody and his solo. Schifrin's "Dreary Days" proves to be a terrific vehicle for Hodge's best melancholia, and all nine tracks emphasize why the saxophonist may well have been the best individual stylist ever to pick up the alto.

As a bonus, the CD includes an entire second album, The Eleventh Hour, originally released by Verve in 1963, with arrangements by Oliver Nelson. This one delves into some serious syrup, but despite an overdone string section, Hodges' horn is as beautiful here as on any other of his many recordings.

Tenor saxophonist Charlie Rouse (1924-1988) is always going to be associated with his time spent in Thelonious Monk's 1960s quintet. His tenure was marked by some real highlights in Monk's discography, but he was also criticized—and with some justification—for staying too long, soldiering on in an outfit that sometimes seemed formulaic...bored, even. Rouse remained in Monk's employ for eleven years, by far the longest musical association in either artists' careers.

Rouse cut some great records both before and after his time with Monk. A number of his later releases feature, in particular, some of his best playing and most distinctive voice. His Sphere quartet, initially conceived as a tribute to Monk, quickly became a vehicle for new composition. Flight Path (Elektra, 1983) has only one Monk song ("Played Twice"), instead featuring music by Rouse and band mates, bassist Buster Williams and pianist Kenny Barron. Rouse's tenor is smooth and understated, delivering well-written melodies and some sophisticated soloing. His sound on this date is, in some ways, reminiscent of Desmond with his focus on restrained delivery over emotional over-blowing. With this outfit, Rouse is clearly performing in a group rather than acting as a leader, with ample spotlight given over to his partners.

But Rouse saved his best for last. On June 6th and 7th, 1988, he entered the Rudy Van Gelder Studio (which mercifully had its piano issues sorted out by this time) with a sextet that included two underappreciated veterans, pianist Walter Davis Jr. and woodwind multi-instrumentalist Sahib Shihab, as well as then-relative newcomer, trumpeter Claudio Roditi. The Resulting Soul Mates (Uptown, 1993) is a fantastic and undervalued set that remains unheard by many jazz fans.

The hallmark of this date is the arranged harmonizing between Shihab's baritone and Rouse's tenor, which adds punch and bottom end weight to almost everything on the disc. Shihab's "DiDa" highlights the two saxophonists' instrumental interplay, with a bouncing two-note call-and-response, before the theme dissolves into a strolling blues. The band covers a lot of ground, including infrequently heard compositions by Elmo Hope, Mal Waldron, and Oscar Pettiford. They play deep blues, swing and bebop with equal aplomb and vigor. They really cook on the opening "November Afternoon," and interpret Monk's battle-worn "Green Chimneys" with one of the most inventive renditions ever cut. Davis, in particular, pays homage to Monk, with a few direct quotes, but expands to include a broader piano language, even as someone in the background sings along, Keith Jarrett style. Ray Bryant's "Prayer Song" possesses a harmonic texture reminiscent of "Abide With Me," from Monk's Monk's Music (Riverside, 1957).

This was the broadest, most creative album Rouse ever recorded in his forty-year career. His soloing demonstrates a creativity and verve that, for whatever reason, was not as prominent on his other recordings, and the arranging takes full advantage of the instruments at hand. The playlist alone is notable for its selections, drawn from deep in the vaults of composition. It's a crying shame this album was a one-off studio date, as this would have been one hell of a working band.

Strangely, the tapes were shelved after the session was completed. Four months after Soul Mates was recorded, Rouse was dead. Sahib Shihab followed the next year, and Davis Jr. just a couple years after that. Sadly, none of them lived to see the album released.

Rouse, Hodges and Desmond are just three of many musicians who made terrific music outside their stints with more famous leaders. There are surely hundreds, if not thousands, of albums out there by great musicians whose primary role was supporting other leader's ensembles. Pay attention to something that stands out on a session—a saxophone break on a piano album, or a single instrument soloing over a big band—and there's a very good chance that somewhere there is a recording, under that sideman's own name, that is well worth hearing.

Duke Ellington & Johnny Hodges, Back to Back (Verve 1959)