Getting To Know Ras Moshe 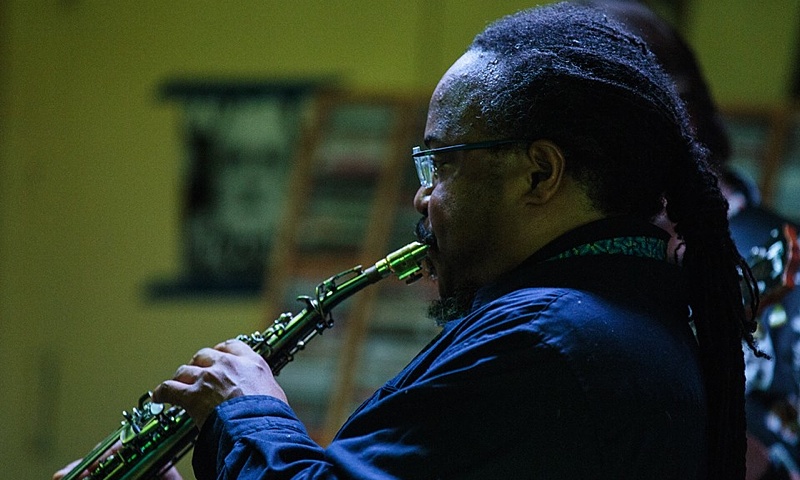 Art and Jazz especially can only benefit society. —Ras Moshe

Ras Moshe is not a name most people are familiar with. If you listen to straight ahead jazz you probably wouldn't know Ras. Now if you go to some of the 'downtown' performances in New York City and Brooklyn you probably have seen him play. I heard him ten years ago playing Tenor Sax at the Sunday Night Avant Series hosted by Dee Pop at the now defunct CBGB'S. I listened very intensely because many feel free form players are not real players or musicians. Based on what I've heard and seen, some of those opinions are true, but there are a host of improvisers that are above the cut and Ras is definitely one of them.

From the very beginning I could hear a history in his playing. He was 37 years old then and I said to myself, "this guy can play, and if he keeps on growing he will be an absolute monster." I am here to tell you he is. He is studied and disciplined, with a gentle soul and a quiet demeanor. He has a great smile and a heart of gold. His quiet demeanor is misleading because when he plays, he explodes with excitement. That is why in 2006 I asked him if he would play Alto Sax on my The Vampire's Revenge CD. When we were about to record the title tune where Ras is the first soloist I said to him, "Ras, this is why you are here. Play and don't hold back and play as much as you want." His solo was everything you would expect from a player of his caliber, as were all the musicians on that date.

This is my first interview for All About Jazz. Up to now I've been writing articles. I've decided that once in a while it would be good to 'change it up' and so I have.

Let me introduce you to Ras Moshe.

AAJ. You were born March 22 1968 with the name Theodore Burnett III. When did you become Ras Moshe and why?

RM. My grandfather's name was Theodore Burnett the 1st. My dad was the 2nd. I'm the 3rd. My Grandfather came here from Jamaica in the 1930's and played Alto and Tenor and recorded with many big bands too.

I received the name Moshe due to a religious conversion in the family when I was about ten. The Ethiopian name Ras came when I got deeper into Rastafarian culture. It's a practice of using the prefix "Ras" before various names. It also means "child of the sun" which is what I prefer. Ras Moshe is like a stage name, but I am the same person.

AAJ. You studied with your father. Did you study with anyone else?

RM . I also studied with my Grandfather. Both he and my father were strict with the lessons, but in a loving way. I was also part of the Heritage Symphony Orchestra, a youth Orchestra that had classes in Pratt Institute. We played a repertoire of Classical music written by Black Composers. I was 13 or 14.

AAJ. What was your attraction to Jazz when other kids your age were listening to Pop, Soul, R&R and Reggae?

RM . I heard Jazz a lot in the house. My father was a serious fan as well as a great Alto player. Also, parallel to that, I got into music for my own reasons too. For me it is a spiritual and social calling. My maternal Grandfather didn't play music like my father, but he listened to music a lot. Growing up around Jazz in that time period was not as uncommon as it got to be later on. When I was growing up, all the music aside from Jazz was innovative as well, regardless of genre, so I listened primarily to Jazz. I grew up with Reggae as well and I played both. Things started to change for me in the late 70's/early 80's.

RM . Things changed because the music in the neighborhood got more generic. The messages weren't very good and it seemed like it was an intentional thing. This particular critique is not because it was "popular" but because of the content. Also actual instruments, unlike the pop music, were more and more through time not making that music earlier on.

AAJ. When you started playing jazz, did you play the standard jazz repertoire?

RM. There was the standard jazz repertoire in my formative years, via the school band from the 5th grade throughout High School. Some of the songs we all know and love.

AAJ. Did you study harmony and theory? If so, where or with whom?

RM . I learned Harmony and Theory in the school bands I played in. My High School the teacher always let us practice even if it wasn't time for class. He showed us a lot. I also took some classes with Jazz Mobile, which brought me closer to jazz.

AAJ. Are you comfortable playing on chord changes?

RM. I am comfortable playing on chord changes. I think that is a natural conception of my playing even when I'm not using composition.

AAJ. Did you go to college or did you become a professional musician after High School?

RM. I didn't go to college for music. I played with African and Reggae drummers. I also played often with a group of Rastafarians called the Drums of Freedom Drum Troupe and ultimately I became a full time musician in 1987. I was based in Brooklyn and for the longest time I was just an audience member for a lot of the music "downtown." I realized eventually that it wouldn't make me less Black to play in places outside of the neighborhood. I really wanted to get out there and let the public hear what I had to say musically.

AAJ. Who were some of your early influences and why?

RM . Early influences! How much time do we have? That's the fun part about Jazz. Every innovator we like to listen to made their own contribution, but it would be John Coltrane. Early on I heard his sound quite often in the house as a youngster, but I think I also got into him and the rest of his music for my own reasons. He was an incredible player in every stage of his musical evolution.

Direct influences were Charles Lloyd Charlie Parker, Coleman Hawkins Max Roach, Elvin Jones, Pharoah Sanders Cecil Taylor, Miles Davis, Rashied Ali Frank Wright, Archie Shepp, Tyrone Washington, Carlos Garnett, Azar Lawrence, Booker Little and Andrew Hill. Since I have gotten my own sound, I no longer emulate these great people, although I still love to listen to them. Cecil Taylor is also a huge influence. The construction of his musical lines is incredible and has had a direct bearing on how I play, but I feel I have my own sound.

RM. I grew up listening to the masters of the so-called Avant-Garde and the main message I got from listening to them is that it came from study, regardless of the intensity and uncompromising nature of the music. I gravitated to "free" playing for a variety of reasons. The main reason being that it's a natural inclination. I heard Jazz in that particular form called "free" from my earliest years. As quiet as it was kept, many in the community were listening to it. I do view the totality of Jazz itself as Free, though, not just one part. I think we who play this music all have a calling as far as what part of the music we want to work with. The whole 'in' versus the 'out' thing is a false conflict. I am proud to be associated with the so-called Avant-Garde. It was and is what I naturally want to play. As I mentioned earlier, I knew from the beginning that the "free music" was serious business as well. Serious business with a strong message that's fun at the same time. If there ain't no fun involved, that's bad!

AAJ. So much of free music seems redundant. I mean you can hear the same musicians perform two nights in a row and it sounds the same. What are your thoughts on this statement?

RM. It depends on who it is. I guess we all develop a language after time. It is best to do different things with our language. At a certain point in the music, there were some who interjected the "free" language into other forms of music (funk, rock, soul etc.) that were more static. The early and more creative stages were known as "fusion," even though Jazz was always fusion music.

AAJ. What do you think is the future of free music? Will it sustain and will it ever be financially profitable?

RM. It will sustain and it is profitable! I think more of its participants need to be heard. Jazz in its totality will live on.

AAJ. Who are some of the players you have worked with now and previously?

RM.. Around 2000,I started playing with William Hooker and that's a lot of fun. I have done many projects with him. Each one is different. Drummer Marc Edwardsis another one. I always enjoyed his work with Cecil Taylor. I am a member of the Orchestras organized by Karl Berger and William Parker. It has been great and there's no end to the learning. These kinds of situations always improve your playing. Being a part of Bill Cole's Un-tempered Ensemble is a great experience. I came up listening to these people, Joe Daley and Warren Smith. Yes. Beautiful. I also recorded with Dom Minasi in a great large ensemble work called The Vampire's Revenge that was filled with some serious players.

AAJ. You said you became a full time musician in 1987. What did you do to make money?

RM. I worked in health food stores and record stores for years. Plus I took classes in College. I already knew how it was out there. I had no intention of becoming certain things that I saw happen with a lot of my favorite players. No judgments intended at all. Believe me my friends.

AAJ. Most free-form players have a hard time making a living. Are you able to support yourself now as a player?

RM. That is for sure. It's like that for Jazz in general, but definitely hard for the so-called free Jazz musicians. Thankfully, I have been working more playing this music, and I occasionally do part time jobs.

AAJ. The nature of the music business has changed drastically in the last few years. Most gigs are door gigs.How do you feel about that?