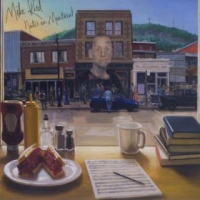 Do you have to be intimately familiar with a specific locale and its literary representations and intimates in order to appreciate music that's inextricably linked to it? Guitarist Mike Rud's Notes On Montreal raises that question, but it's a question that can never truly be answered. For it's up to each individual artist to find a way to appeal to in-the-know audiences while also catering to a broader segment of people who may know little or nothing about the place(s) and work(s) in question. Some surely fail in this mission, but Rud wouldn't know anything about that; this album is a complete success by those terms, paying tribute to the literature and landmarks of Montreal in a universal language that's still likely to speak differently to the insiders.

Rud's liner notes give off a hint of the fascination and awe he has for his home base, but the music is the actual love letter. Rud weaves a genre-blind pathway through the real and imagined Montreal, using the work of authors like Michel Tremblay, Gabrielle Roy, Nicolas Dickner, and Heather O'Neill as inspiration. He strikes a near-perfect balance all the while, creating music that's economical, yet fully realized in every aspect.

The album contains music with country overtones ("Streetcar 55"), tango-tinged allure ("Florentine"), pop-based architecture ("As The Cross Looks On"), and backbeat horsepower ("LaPointe's Beat"), but it's somewhat foolish to speak about the music without stressing the importance of the lyrics that go with it. Rud may have turned to the work of well-known authors to get his mind going, but he writes stories that can stand apart, creating vivid portraits of the lives we lead ("Bags, Clothes, Bottles"). Vocalist Sienna Dahlen brings Rud's tales to life in brilliant fashion, creating tangible scenarios with her every sentence. Rud puts guitar, piano, drums, bass, and a string quartet behind Dahlen, and all do a fine job of supporting her. But the strength of this work comes with Dahlen's telling of tales, and she's never short of compelling. The standout tracks—"Streetcar 55," the haunting "Parc La Fontaine, "Bags, Clothes, Bottles," and "To Carmen, To Breavman," to name just a few—are painterly and poetic, with music amplifying the power of Dahlen's work.

Notes On Montreal took home a 2014 Juno award in the category of "Vocal Jazz Album Of The Year," and that comes as no surprise. Rud created a praiseworthy project that resonates on so many levels.