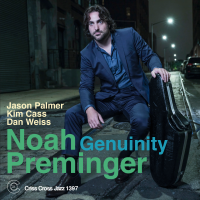 Quite often when an über-talented musician records a disc under his own name, he uses sidemen of lesser talent so as not to detract from his moment in the limelight, or because his ego won't allow him to play nice. That has never been the case with saxophonist Noah Preminger. On Genuinity, his tenth disc released as a leader, Preminger employs partners of equal weight. Listening to the saxophonist and trumpeter Jason Palmer reminds you of the Sonny Rollins/Don Cherry Quartet circa 1962-63 and the early recordings of Wayne Shorter & Lee Morgan. The pair complement each other here and on his three previous recordings Meditations On Freedom (Dry Bridge, 2017), Dark Was The Night, Cold Was The Ground (Self Produced, 2016) and Pivot: Live At 55 Bar (Self Produced, 2015) with no apparent or stated chain of command.

Also heard on those three previous discs was bassist Kim Cass who recently worked on pianist Matt Mitchell's A Pouting Grimace (Pi Recordings, 2017), along with drummer Dan Weiss, a leader in his own right and a mainstay in groups led by Rudresh Mahanthappa, David Binney, and Miles Okazaki, to name just a few.

The disc opens with a brief and decadent saxophone solo "Halfway To Hartford," only to detonate into a hyper-drive post-bop quartet high wire exercise. The music seems to fend off any musician that might consider sitting in with this quartet. That vigor is displayed throughout, as with "Walking On Eggshells," where a conversation between saxophone, trumpet, and drums has each player eager to remark and respond to the other's soloing. All the music on Genuinity was written by Preminger and wholly embraced by the quartet. "TS And Her Spirit" is powered by a funky drum line and interlaced horns, which allows Cass the freedom to interact with Preminger, preaching the gospel of his bass. This ongoing conversation is the foundation of Preminger's music, whether it is weaving a desolate web as on "Mad Town" or surrendering as on "My Blues For You," his tone is that of an old soul and his foundation in the blues is unassailable. He leaves us with "Acknowledgement," which travels from Lester Young to John Coltrane with acknowledgement to Joe Henderson and Joe Lovano. In short, Preminger continues to state the case that he belongs at the table with today's blue-chip tenor players.

Halfway To Hartford; The Genuine One; Mad Town ; TS And Her Spirit; AH; My Blues For You; Nashua; Walking On Eggshells; Acknowledgement.