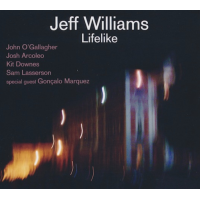 Based in London and Brooklyn, drummer Jeff Williams is a busy man. In addition to gigging and recording with his own group he currently teaches at the Royal Academy Of Music and at the Birmingham Conservatoire in the UK. This is Williams's fourth album for Whirlwind since his debut on the label with 2011's Another Time and the follow-up to 2016's Outlier. Recorded live at London's Vortex Jazz Club on 13 June 2017, Lifelike features a top-notch cast of musicians including altoist John O'Gallagher who's played on two of Williams's previous albums, plus British pianist Kit Downes and guest trumpeter Gonçalo Marquez.

The low key hand drumming and subtle bass line opening to "Under The Radar" belies its true nature, since the number progresses via a keen riff to a more reflective modal interlude with Marquez taking an impressive first solo. "The Interloper," which first appeared on Outlier, follows, featuring Josh Arcoleo on tenor and O'Gallagher on alto, Williams's crisp drumming at times tracing their lines note for note."Dream Visitor," underpinned by an insistent ostinato bass line and fiery drums, offers another opportunity for Marquez to shine. Half way through the dirge-like "Lament," led by Sam Lasserson on bass and later by Downes on piano, the mood changes dramatically as the horns carve out an ensemble melody and Arcoleo submits a an increasingly vibrant Coltrane-esque tenor solo.

Guest trumpeter Marquez evinces a lengthy searching solo on his own composition, the lugubrious "Canção Do Amolador" (the only number not penned by Williams). Punctuated by rallying ensemble interspersions, it culminates in a crescendo of horns and percussion, gradually dying down to reintroduce the maudlin yet captivating head. The horns introduce the serpentine theme to the exuberant closer "Double Life," which benefits from stellar saxophone outings, particularly from O'Gallagher on alto and a sprightly piano solo from Downes. Williams's tautly-constructed, inventive tunes, replete with killer hooks, are pivotal to this excellent album, as are the protagonists who execute it with consummate expertise.