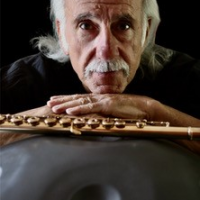 Michael Mason, Jazz Flutist records for the Chicago based independent jazz label Southport Records. He has released (5) compact disc recording projects with the "Exploration" and “Visionary” projects have been evaluated by the NARAS Academy Voting Members.

His 4th compact disc project "Angels of Fire" is dedicated to the (92) students and (3) catholic nuns who perished in the tragic "Our Lady of the Angels" Catholic School Fire on December 1st, 1958 in Chicago were Michael was a first grade student. He is one of five students from “Our Lady of the Angels” who have become firefighters. Michael Mason is not only an accomplished jazz flutist be he is also a commissioned officer lieutenant serving in the fire service for the past 28 years. He is currently with the Downers Grove Fire Department just outside of Chicago in Illinois. You can read more about his firefighting efforts

Michael has performed with James Newton, Arturo Sandoval, Ian Anderson, Edward "Kid" Jordan, Douglas Ewart, Chicago's legendary Fred Anderson owner of the Velvet Lounge in Chicago while performing with some of the most talented jazz musicians in the Chicago area. Michael's flute improvisations in the world of jazz and in world music has been well demonstrated and documented with his association with many great artists from the AACM (Association for the Advancement of Creative Musicians).

He receives airplay from College/ University, NPR and Independent Jazz Stations around the world. He has performed at International Jazz Festivals, the NACA (National Association of Campus Activities) Regional and National Convention Mainstage and Performing Arts showcases.

AVG Records Announces the release of 'Human Revolution' By flutist...