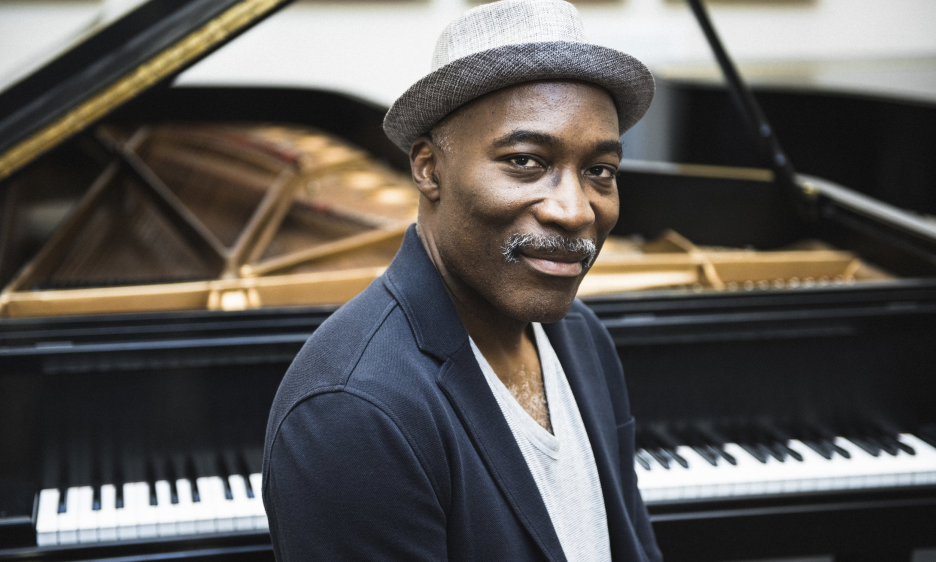 In the tumultuous, twenty-five year interim since his debut, Black Art took the early to mid-'90s jazz community by storm. Pianist Darrell Grant has built for himself a solid, respected, and steady, if low-profile rep; an unapologetic, gentleman post-bopper whose infectious swing brings a room to its feet. So it's only natural that Grant come to Birdland Theater, in the city where he recorded his defining moment, to imaginatively and creatively re-interpret and celebrate the 25th anniversary of the album's release.

Having come through the ranks playing alongside such elders as Betty Carter, Tony Williams, and Roy Haynes, it's an obvious joy for Grant to share the stage with the fire-filled next generation. On the bandstand was the lucid hip-hop bop of trumpeter Marquis Hill (who was only six upon Black Art's first incarnation;) vigorous drummer Kendrick Scott (just fourteen in 1993,) and animated bassist Clark Sommers (whom Grant introduced as not being here yet when when he recorded Black Art with Wallace Roney, Christian McBride and Brian Blade.

From the buoyant opening instrumental trade-offs of "Tilmon Tones" (his tune written to Tony Williams) Grant was more than happy to be back in New York, many a mile from his Portland, Oregon home, but still the scene of his creation. Hill blew fiercely, making his case as one of the leading trumpeters of his time. Scott and Sommers laid down a driving groove, shaking off whatever dust might have accumulated during the tune's lifespan.

"Black Art" starts with a bluesy, ballsy swagger before becoming a double timed jam that elicited howls and applause from the crowd. After a warm introduction of the band and the evening's glad purpose, the quartet evolved from the introspective cadences and warmly melodic Grant solo that began "Foresight" into a pulse quickening ride then back again with Hill's elegant, muted solos fitting the nature of the tune to a t. Intro'd as a new tune, "The New Black," after a quick series of percussive bursts with Hill again leading the way, flowered into a rollicking piece with crafty solos by one and all until the leader, nearly jumping from his bench, took charge with Sommers and Scott thrumming effervescently behind him.

Defying time and thousands of interpretations, Bill Evans's "Blue In Green" awash in brushes and cymbals, remains a delicately nuanced and many shaded collage no matter who takes it on, when or where. Hearkening back to his days with Betty Carter, "What is This Thing Called Love" sporting Sommers' rich, sinuous bass moves from satisfying ballad to a charging, handicapping reverie, to a late night blues only a veteran could testify to. Grant cheerfully closed the evening with a roller coaster ride of Ron Carter's effusive "Einbahnstrasse" a song he heard from Chick Corea Herbie Hancock Keith Jarrett McCoy Tyner (Atlantic, 1976) an album he attributes his musical education to. Even if it's a short return, welcome back, Mr. Grant.