By MARK SABBATINI
August 28, 2015
Sign in to view read count
Pianist Chick Corea is one of the major pioneers of fusion, with his influence since the 1960s also extending to post-bop, Latin, free-form and avant-garde jazz. He is a rarity in his proficiency and distinctiveness on both piano and synthesizers, and is one of the first players to fully exploit the potential of electronic instruments.

Players influencing Corea include Mozart, Beethoven, Art Tatum, Thelonious Monk, Bill Evans and, most of all, Bud Powell. He ranks with Herbie Hancock and Keith Jarrett as the most influential keyboardists of the modern era.

Career highlights include collaborating with Miles Davis on Bitches Brew, considered the first successful rock-fusion album, and forming the landmark 1970s fusion band Return to Forever. His compositions include the modern standards "Spain," "La Fiesta" and "Now He Sings Now He Sobs." As of summer 2004 he had been nominated for nearly fifty Grammy awards and won more than ten.

His trademark style is a colorful lyricism filled with dominant chords, chromatic and diminished scale runs, and rapid-fire phrasing. He's also renowned for unique electronic voicings, experimental techniques such as plucking the strings of his piano and a percussion-like approach to many pieces.

Corea was born Armando Anthony Corea on June 12, 1941, in Chelsea, Mass., and began playing piano at age 4. His father was a professional trumpet player and his enormous collection of jazz played a large role in shaping the younger Corea's future. He moved to New York and, after studying briefly at Columbia University and Julliard, began performing in 1962 with Latin jazz musicians Mongo Santamaria and Willie Bobo, plus players such as Blue Mitchell, Herbie Mann and Sarah Vaughan.

His first studio recording came in 1962 on Santamaria's Go, Mongo! and in 1964 he recorded his first original composition, "Chick's Tune," on Mitchell's A Thing To Do. His 1966 debut as a leader was Tones For Joan's Bones and his first widespread critical acclaim came on 1967's Now He Sings, Now He Sobs, a trio album with bassist Miroslav Vitous and drummer Roy Haynes that finds Corea experimenting more with free jazz.

He got his chance to play with Davis in 1968. Davis, in the early stages of his rock/fusion phase, wanted someone to play electric piano, which Corea was originally reluctant to do, but warmed to it through experimentation. Corea recorded the landmark Bitches Brew and subsequent In A Silent Way albums with Davis before forming the avant-garde group Circle with bassist Dave Holland, saxophonist Anthony Braxton and drummer Barry Altschul at the end of the 1960s.

In 1971 "the second great discovery of my life"—Scientology and the works of L. Ron Hubbard—prompted Corea to seek a more structured musical setting aimed more at reaching an audience than sophistication. He joined bassist Stanley Clarke to form Return To Forever. The initial focus was Latin music, but a couple of years later became a fusion quartet.

Straight-ahead performances were more prevalent in Corea's playing during the first half of the 1980s as, perhaps not coincidentally, a public backlash to '70s-era fusion emerged.

Corea made his second major splash on the fusion scene in 1986 with the Elektric Band, comprised of players and styles he has worked with with at least intermittently ever since. The emphasis was often compositional rather than improvisational, with less adventurous songs and fewer solos than the Return To Forever bands. Corea also worked some of his fusion-oriented themes into a traditional setting by releasing trio two Akoustic Band albums.

Corea has released perhaps his best and most diverse work since the breakup of the Elektric Band in 1991, shifting consistently from traditional to fusion to experiments in classical music, with a corresponding change in personnel for the albums and tours. Part of the diversity is due to his co-founding of Stretch Records in 1992 with producer Ron Moss, which the pianist says allow him greater freedom in issuing recordings by himself and other musicians.

Among Corea's most recent projects are a series of reunion performances in New York to celebrate his 60th birthday, plus a reunion tour and album with the Elektric Band. Tones For Joan's Bones (aka Inner Space) (1966)
Corea's debut album as a leader is largely a hard-bop session with a McCoy Tyner presence to it. The original album is hard to find and Inner Space is missing some songs (with others featuring flutist Herbie Laws added), but a reissue CD combining Bones with bassist Miroslav Vitous' Mountains In The Clouds is available. Now He Sings, Now He Sobs (1967)
Corea's breakthrough trio album contains only five songs, but eight additional tracks are on the reissued CD currently available. Among the more notable moments are his solo on the opening "Steps -What Was," which contains the foundation of his subsequent famous song "Spain," and his one-at-a-time free-form exchanges with bassist Miroslav Vitous on "Gemini."

A.R.C. (1971)
This trio album featuring bassist Dave Holland and drummer Barry Altschul isn't as avant-garde as the recordings they issued as the group Circle (which also includes saxophonist Anthony Braxton), but is a solid jazz outing -some argue the last for several years as he entered his Return To Forever phase. Return To The Seventh Galaxy (1996)
A double-CD featuring, in theory, highlights from the first two Return To Forever groups plus about 40 minutes of previously unreleased music. A good overview of the group's various incarnations. Crystal Silence (1972)
This collaboration with vibraphonist Gary Burton, one of several such pairings, is an upper-echelon choice among both fans and critics. It features a strong modern chamber presence and is generally low-key in tempo, but has an intensity and depth missing from many of Corea's fusion recordings.

Live In Montreux (1981)
An excellent straight-ahead concert album, due in no small part to saxophonist Joe Henderson as part of an all-star quartet that also includes Roy Haynes on drums and Gary Peacock on bass. Haynes, who maintains his usual quiet fire throughout, ends the performance with a high-energy extended solo on "So In Love." 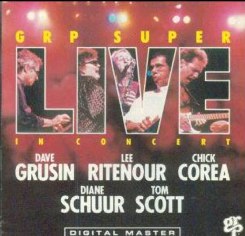 GRP Super Live In Concert (1990)
Fans of the Elektric Band will find this double CD worth searching for because the entire second disc is Corea's band performing major hits from their early albums. The live versions are vastly superior to the studio cuts -among the highlights are Eric Mariental's burning sax solo on "Time Track," and Corea and bassist John Patitucci lighting things up on the 18-minute "No Zone." Inside Out (1990)
The Elektric Band generally is considered a good, not great, stretch in Corea's career, but this album is a definite highlight for fans and those into reasonably eclectic modern fusion. The compositions are generally the strongest, if not most commercial accessible, Corea wrote for the band and everyone gets plenty of chances to stretch out in a settling they obviously had become familiar with. Alive (1991)
Corea infuses a hefty fusion presence into his Akoustic Band with a set of standards and originals in a "live" set. Incredibly high energy outing, especially during the first half, and fans of drummer Dave Weckl will find some of his most intense work ever on the opening "On Green Dolphin Street" and Corea's "Humpty Dumpty." Remembering Bud Powell (1997)
Probably the safest bet for a quality traditional jazz outing, as there is little disagreement it ranks among his top ventures into that field. The sextet tribute to one of Corea's mentors features a top-tier cast -including sax players Kenny Garrett and Joshua Redman, plus a reunion with Haynes -each of whom add their own modern touches to Powell's work.

Corea Concerto (1999)
A radical—but highly noteworthy and Grammy winning -live performance of Corea's first original symphonic work, featuring the London Philharmonic Orchestra and his Origin group performing a Mozart-inspired concerto and perhaps the definitive version of "Spain." Corea plays with as much passion here as any of his albums, most everyone else is equal to the task, and in short this is as fine a blend of of classical and jazz as anyone can reasonably expect to hear. Past, Present And Futures (2001)
A trio album that is one of Corea's strongest in recent years. He is aided greatly by bassist Avishai Cohen, who plays with a depth and freshness equal to the best of anything else found in Corea's discography. Rendezvous In New York (2003)
Corea hosted his own "This Is Your Life" for his 60th birthday with a series of reunion performances in New York, portions of which are featured on this double CD. It's a bit uneven in quality, but still worthwhile for fans and "single album" new listeners wanting a more contemporary overview of his work. DVD versions of specific performances were planned at the time of this writing.