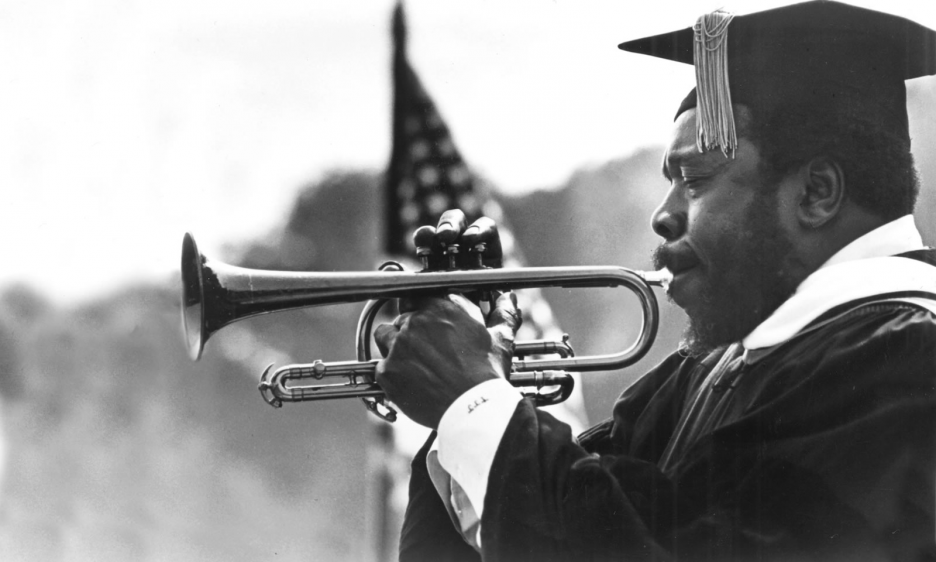 I appreciate the fact that my pop was so dedicated to what he was so passionate about. He was unyielding in his quest to play music like he wanted to play it.
&#151Bruce Jones on his father, Thad Jones

The impact of living in a musical household, witnessing your dad and your uncles jamming in the basement can definitely create a positive and meaningful outlook for a young kid. Stories of growing up jazz come to mind for Bruce Jones, the eldest son of trumpeter, composer, and band leader Thad Jones. Bruce is also the nephew of pianist, arranger, composer and band leader Hank Jones, and nephew of drummer and band leader Elvin Jones.

Bruce is the eldest of three siblings, a middle sister, Thedia and a younger brother, Thad. Bruce excelled in sports throughout grade school. Admittedly, he does not give any claim to being musically inclined, nor having the natural ability to develop the skills to play. One day he decided to give the drums a try. "It seemed somewhat physical like sports," Jones thought. Well, with his uncle Elvin (Jones) being around, Mel Lewis and Louie Bellson, all donating drum pieces, soon Bruce had drum kits from everyone.

After six months he became frustrated, realizing that he was not going to be this dynamo he envisioned. He also became a little self conscious because he did not want the neighbors to hear his progress which was not going well.

Hank (Jones), the eldest of the three brothers was born in 1918. "What people do not know is that uncle Hank practiced until the very end. He would wake up and just practice and anyone that wanted to listen, he would tell them that you need to practice. Him being the master he was, did it up until he could not do it anymore," explains Jones.

Thad (Jones), known as one of the greatest trumpet soloists, was a self taught musician and was born in 1923. "I am pretty sure my dad was self taught, as was uncle Elvin. I recall uncle Hank getting a few lessons at some point early in his career," recalls Bruce.

Elvin (Jones), the youngest, was born in 1927. Elvin showed an interest in drums at a young age. As a member of the John Coltrane Quartet, he emerged as a prominent contributor to jazz drumming. Hank, Thad, and Elvin were all amazing jazz artists. Each masters on their respective instruments, and they all landed in New York City at different times of their careers. The brothers were born in Pontiac, Michigan outside of Detroit.

Raised by both parents in a Christian household, their father was a deacon in the church. "I often revel in the fact that they all came from Pontiac, Michigan, and with my grandfather, their father being a deacon in the church, I oftentimes think of how it must have been with them having all this music in them and being somewhat restricted coming from a strict Christian background. I am sure that playing jazz music was not what my grandfather had in mind for a career. Back then I am sure jazz was considered like blues. I do not want to say devil music, but I want to say something similar to that, you know, among church going people." says Jones.

Thad played with the Count Basie Orchestra for many years, and in 1963 he moved to New York City and teamed with drummer Mel Lewis to create the Thad Jones / Mel Lewis Orchestra. They performed at the Village Vanguard for twelve years, on Monday nights, which became very popular. At this time Thad's schedule became pretty busy, traveling the world, and performing at various nightclubs.

Bruce recalls taking family vacations with his dad and noticing for the first time that his father was famous. "We did not travel with him when he toured in Europe and Japan because he did not want to interfere with our education, which he believed in dearly. We were able to attend some of his local gigs.

"We moved to Teaneck, New Jersey while I was still in school. Teaneck, for some reason was the center for a lot of artists back then, recalls Jones. Yusef Lateef lived on my block, Duke Pearson lived directly across the street. Roland Hanna, McCoy Tyner, and Milt Jackson all lived around the corner.

Sam Jones, the bassist, and Ray Barretto lived around the corner as well, these are just the ones that I can think of on top of my head. It was an interesting confluence of things that led to all of those brilliant artists to finding Teaneck and making it their home for awhile. A really interesting dynamic," recalls Jones.

Jam sessions were not a common thing in the household but Bruce does recall a very special time during his high school graduation when Roland Hanna, Mel Lewis, and Kenny Rome came by to play. "When I look back now at the size of the basement, it seemed so big back then. I cannot believe all of these cats set up in this small space. My dad would often compose on the piano downstairs. One day, I remember he came upstairs and said "what does this sound like, come on down." "I said, it sounds to me like a child being born, and he said "nice." In 1969, the jazz instrumental "A Child Is Born" was recorded, written and arranged by Thad Jones. My sister and I were involved in that process.

Back in his college days at Ithacha College, Jones was known for his impressive record collection and powerful sound system. His dorm room was the go-to place to hear all of the latest in jazz and rhythm & blues.

After putting it out in the universe that he needed to find some friends like himself, the universe answered. Bruce and his new found friends collectively convinced the university to open up a record store in one of the dorms. This was heaven for these college music heads. "We were ordering copies for the store and copies for ourselves. We were blessed and privileged enough to be right at the center of things even in college. That helped me stay on top of the music. That was a special time."

The music of Thad, Hank, and Elvin has allowed Bruce to look at various approaches to problem solving. Their music has opened him up to look outside of the box, to improve on certain aspects of his life. Today, Bruce works in radio marketing and promotion. His wish is to stay involved in the process of preserving the work of his dad and his uncles. "I am currently dedicated to helping keep the Jones Brothers legacy alive. I am working with uncle Hank's estate to try to figure out how we can do that with his music and original songs.

In terms of uncle Elvin's legacy, his wife Keiko is pretty hands on with the Jazz Machine and I am not quite sure at this point if they have gone on or continuing to play. At some point, I do want to do some work to keep their brand as the Jones Brothers in that regard. Other people are involved as well. The William Patterson State University has an archival system with dad's music, which I found out about talking with a gentleman at uncle Hank's memorial service. Dad taught there and on staff for awhile. They have had a good run of musicians there that have since continued that legacy."

Bruce is very proud of the fact that his dad and his uncles were all able to live their dreams and become successful. "Looking back on their body of work and what they meant was actually deep, because you have to factor in the racial and social climate at that time.

I appreciate the fact that my pop was so dedicated, to what he was so passionate about. He was unyielding in his quest to play music like he wanted to play. He would not compromise, he had a focus of what he wanted to do, and he stayed the course. He was just really focused, and would not vacillate on his goals, views or vision. And then the other thing, a lot of people do not know is, because of his "blinders on" kind of mindset, he would take jobs in other genres. He worked on The Ed Sullivan show, and he was working with The Beatles, all of those groups. There were a lot of talented cats in the CBS Orchestra, Hank (Jones) was one of them, he played with them for awhile.

There were a lot of cats who provided for their families and played music that they loved at night. They did different things during the day, playing in the pit at some of the broadway plays, like Sophisticated Gents. I guess I am making the point that, if one really truly believes in something, stay the course if you are passionate about it and it will work out.

"I cherish the last several years attending the Grammys with uncle Hank, and, I think of how many times Dad did not win, he was so frustrated with that whole process, which has changed over the years. He just felt it was just a bunch of bunk. He did win posthumously in 1978, and I said, wow, I think it would have been nice for him to get his recognition when he was alive. Uncle Hank was given the living lifetime award one year. "That is one thing that they have done that I do like about the Grammy process. They have incorporated giving a lot of living legends their due while they are alive, like Clark Terry one year, that is one thing I do applaud them for.

Growing up Jazz, yes, being proud is one word that does come to mind when I think about them. In this art form, which is a sophisticated and complex, is not for everyone. But the people who do get it are very passionate about it, and they see the genius in the music."