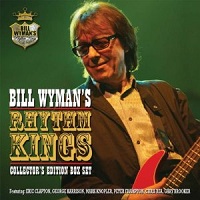 From all accounts, founding member Bill Wyman resigned from the The Rolling Stones in 1992 because he was weary of the frantic pace of life as bassist for "The World's Greatest Rock 'n' Roll Band."

Wyman's bass provided the band's solid rhythmic foundation and he seemed rather comfortable with his corresponding image as "the quiet Stone." His bass seems more often felt than heard throughout the Stones' catalog, with two glorious exceptions: his rubber-band line stretches then catapults "Miss You" into a seamless convergence of dance and rock, and where would "Jumpin' Jack Flash" be without Wyman's stomping, prowling low-end growl? Left to share crumpets, most likely, with Eleanor Rigby.

But even if his love affair with the rock 'n' roll lifestyle ended, Wyman never fell out of love with the music behind it. After leaving the Stones, Wyman explains, "I thought, maybe I should do some music on the side, but not heavy; I don't want to have to worry about charts, image and all that crap. It's not gonna be a career move—I'm just gonna do it for the fun.

"We were just gonna do a blues duo and call ourselves the Dirt Boys."

Next, Wyman put together a list of music in which he first found his own inspiration. "It ranged from Louis Armstrong, Billie Holiday, Fats Waller, Ray Charles, into the early rock 'n' roll, like Louis Jordan and Cab Calloway—all the way back to the '30s and upwards," he recalls.

"What I found was that, when we started doing this music, whether it was a song by Fats Waller, Sam Cooke, Jackie Wilson, Chuck Berry, or whatever it was, nine times out of ten, the original piece of music was played by a double bass, not a bass guitar," he continues. "So I had to change my style and play with my thumb instead of a guitar pick in order to sound as much like a double bass as possible with the way I played, but also the notes I played. I don't know how many times people have listened to the records and asked me, 'Who's playing the double bass?' No, it's me—I'm playing it with my bass guitar, but I'm playing it in a different way."

Wyman soon discovered that his Rhythm Kings could do more than reintroduce older music to newer generations. "I discovered that I could write songs in the old styles, because I would analyze the way they did the arrangements, the way the instrumentation sounded, the way people sang and the slang they used for the lyrics. And in the end, the track, when we'd finish it, would sound like a song from the '30s, '40s or '50s. It's almost like an archeological dig into music," Wyman suggests. 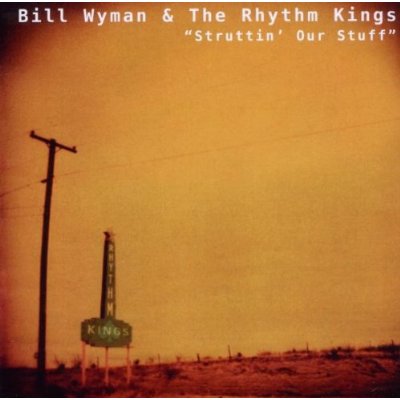 Crammed full of lost and obscure blues classics,Bill Wyman's Rhythm Kings Collector's Edition Box Set (Ripple Records, 2011) compiles the treasure from this "archeological dig" into a boxed five-CD set. The Rhythm Kings' debut, Struttin' Our Stuff (Velvel, 1998), kicks off with the familiar, snarling and toothy guitar hook of "Green River" (John Fogerty), a funky swamp two-step that honors both the music and renegade spirit of the original. In "Melody," which Wyman lifts from the Stones' Black & Blue (Rolling Stones Records, 1976), Fame's venerable voice—a joyous blend of soul, jazz and blues—swings lightly in gently grooving funk while Clapton's guitar sings near perfect blues. "I'm Mad" (Willie Mabon) features a gravelly blues vocal from Geraint Watkins, wrapped like asphalt around hysterically forlorn lyrics, while "Down in the Bottom" (Willie Dixon) tears through the old-school, roadhouse kind of blues upon which the fledgling Stones band cut its blues-rock teeth. Wyman stops Struttin' with a rocky trip down "Tobacco Road," with Frampton's guitar howling out the sound of blues agony. 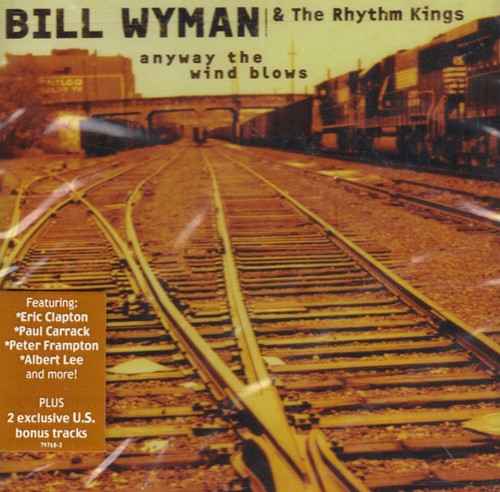 Frampton and Fame shine through J.J. Cale's title track to the Rhythm Kings' second album, Anyway the Wind Blows (Velvel, 1999), as Cale's typically low-key, mellow country-blues shuffle meets Wyman's own minimalist and laid-back style. Fame cuts Mose Allison's "Days Like This" into a wonderfully accurate tribute, ripe with soulful electric organ and acoustic piano, that sounds precisely like the artist it honors ("There goes the bus that I missed," drawled from his mouth in sweet and sour blues, is somehow almost funny). The Kings also revisits two rough-and-tumble blues, "Mojo Boogie" (Willie Mabon) and "Too Late" (Willie Dixon), plus Don Redman's more sophisticated blues, "Gee Baby, Ain't I Good to You," which Fame and Clapton sing and play with bows toward T-Bone Walker. It seems curious to swap Skeete's female voice into the lead of the iconic male soul vocal "Spooky," but she and her accompaniment more than work it out. 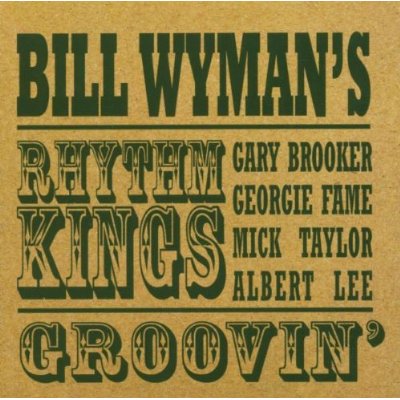 Skeete also takes the lead vocal on "I Put a Spell on You" (Screamin' Jay Hawkins) and The Rascals' title track to the Rhythm Kings' third album, Groovin' (Koch, 2000). Both tunes sound true to the music and respective spirits of the originals—Hawkins' deep and dark, gathering storm cloud blues, and the Rascals' tender walk through romantic sunshine. Wyman's bass in the title track is simply perfect: rock solid and basic, foundational yet dynamic, and right where you'd expect to find such an expert bassist.

Groovin' features the single most impressive blues of the entire Rhythm Kings Collector's Edition Box, "Can't Get My Rest at Night." Fame growls out its gritty and deep lead vocal, while Mick Taylor's screaming electric riffs shred his pedal steel guitar into country-blues splinters. Groovin' also presents the band's own description, co-penned by Fame and set to a casual boogie, of how indisputably cool it is to be a "Rhythm King": "A lot of people want to be like us/ Because a solid-rocking rhythm king/ Goes ahead and does his thing/ Away from home, just like a rolling stone/ Never knowing what the future brings..." 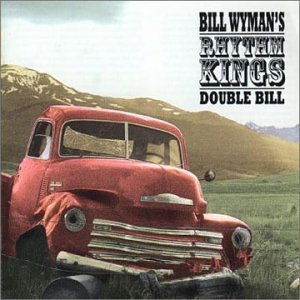 To open Disc Two, Wyman and Fame steer the rhythm toward New Orleans, as sassy horns swing in house-rocking counterpoint and "The Joint Is Jumpin'" (co-composed by Fats Waller). Fame's laconic lead vocal and sanctified organ swells turn the traditional "Jealous Girl" into backwoods country blues. You can sure hear Hank Williams sing this (and not Junior). Taylor and Wyman jointly honor Muddy Waters' "Rollin' and Tumblin'" with their original "Rollin' and Stumblin,'" their sharp riffs chopping its Delta blues out of hard and heavy rock.

Even if some of these tunes might benefit from a few more teeth or a bit more bite, there's no arguing that Bill Wyman's Rhythm Kings Collector's Edition Box Set demonstrates astounding diversity, range and taste. "There are very few bands that have the depth and versatility of my band in doing a total mixture of music," says Bill Wyman, King of the Rhythm Kings. "We play blues, reggae, soul music, gospel-y stuff, jump music, early rock 'n' roll, we do '70s stuff—it's a whole mixture. We can do anything."

Tracks: CD1: Green River; Walking on My Own; Melody; Stuff (Can't Get Enough); Bad to Be Alone; I'm Mad; Down in the Bottom; Motorvatin' Mama; Jitterbug Boogie; Going Crazy Overnight; Hole in My Soul; Tobacco Road. CD2: Anyway the Wind Blows; Spooky; Walking One & Only; Mojo Boogie; Too Late; Every Sixty Seconds; Ring My Bell; Days Like This; He's a Real Gone Guy; A True Romance; Gee Baby, Ain't I Good to You; When Hollywood Goes Black & Tan; Crazy He Calls Me; Struttin' Our Stuff; Sugar Babe; Gonna Find Me A New Love. CD3: Tell You a Secret; Groovin'; Rough Cut Diamond; Mood Swing; Hole in the Wall; Can't Get My Rest at Night; I Put a Spell On You; Tomorrow Night; I Want to Be Evil; Rhythm King; Daydream; Oh Baby; Streamline Woman; Yesterdays. CD4: Long Walk to DC; Hot Foot Blues; Hit That Jive Jack; Love Letters; Love's Down the Drain; I Can't Dance; Snap Your Fingers/What a Friend We Have in Jesus; Get in the Kitchen; Boogie Woogie All Night Long; Do You or Don't You/I Wanna Know; Trust In Me; Turn on Your Love Light. CD5: The Joint is Jumping; Brownskin Girl; Tired & Sleepy; Lonely Blue Boy; Bye Bye Blues; Where's the Money; Jellyroll Fool; Jealous Girl; My Handy Man; Rollin' & Stumblin'; Keep on Truckin'; Breakin' Up the House.