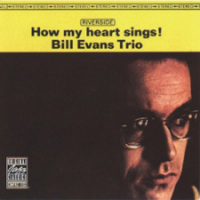 Bill Evans was a bit of a quandary. He was a recalcitrant junkie of the Chet Baker orbit, who still managed to retain some semblance of artistic uniqueness. Where Baker may still be heard in a fit of nostalgic seizure and appreciated for a great wasted talent who did manage a couple of "masterpieces" between shots of morpheus, Evans influenced every pianist after him and has yet to be replaced with a talent equal to his. Evans can easily be seen as a germinal force similar to that of John Coltrane: innovators who expressed at a time when the more conservative ears might have thought nothing else could be said.

How My Heart Sings was Evans' second recording with a trio after LaFaro's death. The bassist was Chuck Israels, who went on to record widely with Evans. After taking several months off, Evans recorded as a quartet on Nirvana (Atlantic, 1962) with Herbie Mann and Israels followed by a duet recording with guitarist Jim Hall, Undercurrent (United Artists, 1962). Evans returned to trio recording in May 1962, putting to tape pieces that would make up Moonbeams (Riverside, 1962) and How My Heart Sings (Riverside, 1962). These recordings are historically paired like Chet (Riverside, 1959) and Chet Baker Plays the Best of Lerner & Loewe (Riverside, 1959), creating compelling diptychs on the craft of jazz.

After the ballad-laden Moonbeams, producer Orrin Keepnews wanted a slightly more up-tempo recording that resulted in How My Heart Sings. Fifty years later, the recording remains painfully introspective, up-tempo or not. Evans was the Van Gogh of jazz: sensile and troubled, characteristics that expressed themselves in his playing his entire career. On the title tune and Dave Brubeck's "In Your Own Sweet Way" (two takes offered here), Evans turns inward what speeding the pieces up, creating an anxious tension between the conflicting elements. Bassist Israels, making no question he would not try and emulate LaFaro, tethers Evans, perhaps more than the pianist would like, adding to the pathos of the recordings, while drummer Paul Motian continued his roll of timekeeping and accounting.

This disc title is also the title of Peter Pettinger's biography of Evans (Yale University Press, 2002). The song captures Evans' state of mind at the time of the recording, a particularly vulnerable time for a particularly vulnerable artist. While the "New" Criticism claims one should only judge the work alone, this is impossible for the music of Bill Evans. His life impacted his art and his art impacted all that came after.