By Eyal Hareuveni
August 20, 2013
Sign in to view read count 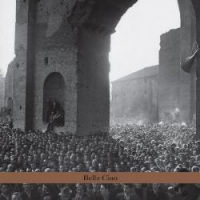 Bella Ciao, the fifth album from Brooklyn art-rock band Barbez, is a homage to both ancient Roman Jewish melodies and the Italian Resistance during the Second World War. Barbez's leader, Dan Kaufman—who recorded one of the most remarkable albums in the history of the Tzadik label, Force of Light (Tzadik, 2007), a profound musical realization of the poems of the late Jewish/German poet Paul Celan—named his current project after the famous partisan anthem. This anthem has been an international symbol of resistance for more than seventy years and is re-imagined here in a stunning interpretation for a new generation.

Kaufman was introduced to the melodies of the Roman Jews, the oldest continuous residents of Rome (whose liturgical music was passed on orally from generation to generation) by musician Yotam Haber. These melodies resist following the East European, Ashkenazi scales or the Mediterranean, Sephardi scales, but have a mysterious quality of their own. Kaufman journeyed to Rome in 2009 to learn more about this unique music, and there he also studied the heroic struggle of the Italian partisans.

As on Force of Light, Kaufman relies on a similar personnel and succeeds in weaving a musical universe that, again, resists confinement by any specific genre, capturing the rare, timeless quality of the ancient melodies. The musical envelope is based on old- world, European folk songs, but dresses them in modern chamber, art- rock, reserved-yet-intense arrangements. These interpretations emphasize the roles of Kaufman, theramin artist Pamelia Kurstin, vibraphonist Danny Tunick, clarinetist Peter Hess and violinist Catherine McRae.

Some of the melodies, such as the dramatic "Yoshev Beseter Elyon," sound as though they are symbolizing the turmoil and chaotic, painful era of the Roman Jewish community during the Second World War. Other ancient melodies, such as "Et Shaare Ratzon" and "Mizmor Leasaf," are arranged as completing the timeless story of defiance, incorporating hypnotic recitations of poems by the great Italian writer and filmmaker Pier Paolo Pasolini, and his contemporary, the poet Alfonso Gatto.

The passionate, driving fury of "Kamti Beashmoret" introduces the powerful title song, sung in Italian by the charismatic Dawn McCarthy of the Faun Fables duo. This song is arranged as an infectious, modern anthem. The song's inspiring lyrics were written by an unknown author, describing a partisan's wish to fight—and die, if need be—so that others may one day be free: "Bury me up in the mountain, under the shadow of a beautiful flower, and the people who will pass by will say to me, 'What a beautiful flower.' This is the flower of the partisan, who died for freedom."

Bella Ciao is a beautiful, inspiring and haunting mosaic of the ancient and the modern, filled with sometimes quiet, other times furious, but always timeless melodies.