By Larry Taylor
September 12, 2012
Sign in to view read count 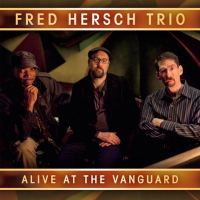 Pianist Fred Hersch's Alone at the Vanguard (Palmetto) was chosen by many as one of 2011's best, and rightfully so.

Now, following up that solo album, is Alive at the Vanguard, a double album which finds the pianist with his current trio. Playing together since 2010, Hersch has settled in comfortably with bassist John Hébert and drummer Eric McPherson, veteran musicians of estimable talent who both can drive hardily and swing delicately. This recording puts the three on a par with the great Bill Evans and his small groups.

Reviewing the trio at the Vanguard the week of the live recording, The New York Times' Nate Chinen referred to the group's confidence and "stronger sense of itself." The Times had earlier hailed Hersch, and put him alongside current piano greats Brad Mehldau, Jason Moran and Vijay Iyer. The newspaper called them "trailblazers of a borderless, individualistic jazz—a jazz for the 21st century."

The album opens with Hersch's "Havana," with its infectious Latin beat—perhaps a nod to Chick Corea. The inventive McPherson features brushes, traps and claves on his kit, building to a strong finish.

On the CD, Hersch displays two approaches to standards—both exhibiting his improvisational skills. "Softly As In A Morning Sunrise," the old Romberg/ Hammerstein favorite, begins softly as Hersch adheres closely to the tune; midway he ups the speed and the arrangement becomes seemingly extemporaneous. On Cole Porter's "From This Moment On," Hersch sidles close to the melody but purposely avoids it. At the end he lushly embraces it.

In the cover notes, Hersch indicates he was greatly influenced by Sonny Rollins. Here, he plays a delicate, bluesy rendition of the saxophonist's classic "Doxy," with a Fats Waller touch at the end.

The last number, a medley, creates a whiplash effect. Hammerstein/Kern's "The Song Is You" flows slowly and sensually, piano wed with the impeccable rhythm section. Then, on with a flourish, comes Thelonious Monk's complicated "Played Twice," drums at full throttle. All ends on a good high.

This is a generous album in content and spirit, from three players who really have got it right.