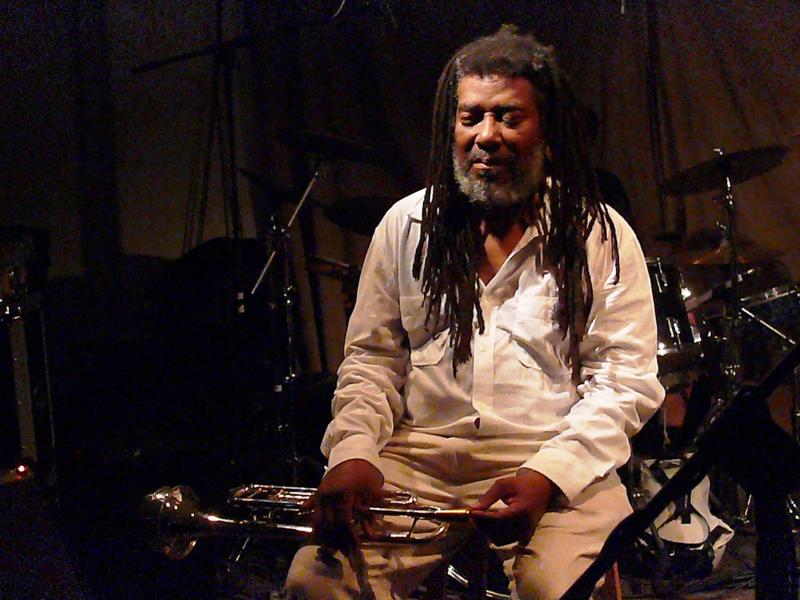 As if searching for the perfect setting, for the second night of his two-day residency at north London's Café Oto, legendary AACM trumpeter Wadada Leo Smith was pitched against two contrasting ensembles drawn from the capital's reservoir of improvising talent. First up was a brass trio, supplemented by the electronics and melodica of Spring Heel Jack impresario, erstwhile guitarist John Coxon, while the second was a percussion threesome. Although Smith's work Stateside has revolved around working units such as his acclaimed Golden Quartet and his electric string orchestra Organic, interpreting his own compositions, culminating in the monumental Ten Freedom Summers (Cuneiform, 2012), in the UK he works almost exclusively in uncharted domains.

Smith has become an increasingly frequent visitor to the UK in recent years, a situation stemming initially from his invitation to contribute to Coxon's work as part of Spring Heel Jack, which produced The Sweetness Of Water (Thirsty Ear, 2004). Subsequently, he also recorded Abbey Road Quartet (Treader, 2007) with the guitarist and other improvisers. Since then the brass man's appearances have multiplied. He has worked with varied ad hoc amalgams, including as featured soloist with the London Improvisers' Orchestra, and most notably with the tandem percussion of South African Louis Moholo-Moholo and Steve Noble at Freedom of the City Festival festival in 2010, a gig lauded by many as one of the finest ever. Sadly even though the BBC documented that event, a technical glitch meant that their efforts were unusable, and so the event has passed into legend, propagated by the lucky few witnesses.

Once again, the BBC Outside broadcast van, parked in the street opposite, was on hand. Flanking the American for the first set, trumpeters Ian Smith and Byron Wallen, as well as trombonist Gail Brand, ranged across the stage, while Coxon was ensconced behind a bank of electronics to the rear. As the horns together conversed in an avuncular brass Americana, Coxon frequently invoked an ambient pulse which anchored the more abstract exchanges.

Though star of the show, Smith selected his contributions carefully, spending almost as much time listening to the interplay of his band mates, as making his own mark. Nonetheless, he was clearly the first among equals, as shown early on, when his breathy susurration was joined by the respectfully muted backing of the other three, overlapping like brassy tectonic plates. Not content with generating form with his own purposefully sculpted interventions, the American also at times orchestrated a series of sustained tones, as well as cueing solos and accompaniment, constructing fixed reference points amid the drifting extemporization. 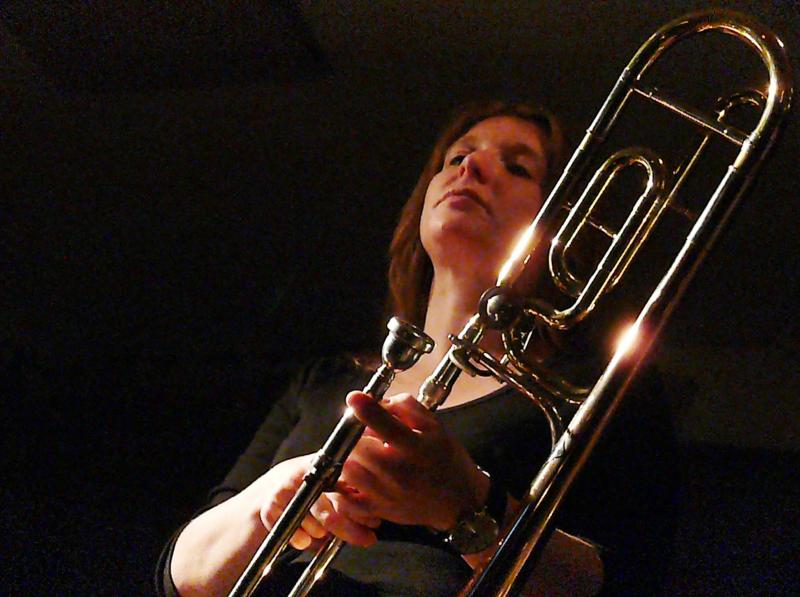 The Dublin-born Ian Smith shaped unpredictable lines with whistles, squeaks and buzzes, an adventurous attitude shared by Brand, his colleague in the London Improvisers' Orchestra. In contrast, the much-traveled Wallen, a graduate of the Loose Tubes big band, favored a cooler more melodic approach on trumpet and flugelhorn. One passage of exquisite beauty saw the American's muted lyricism echoed supportively by Wallen and Brand, both also muted, and Ian Smith's waspish open trumpet and Coxon's melodica, which all gradually cohered into gently descending cadences like a sighing Greek chorus. Their superb set, conjured without either benefit or need of rehearsal, could have been much longer than its 35 minutes duration.

Smith returned for the second set, fronting a percussion troupe comprising Oto regular Noble and Charles Hayward, once of experimental rock band This Heat, behind twin trap sets, and Orphy Robinson, an alumnus of the Jazz Warriors, at a Xylosynth—a vibes-based synthesizer interface. Repeating the format of the previous evening, which split into acoustic and electric sets, Smith expanded his palette by utilizing a semicircle of effects pedals spread at his feet. However the drums had the privilege of starting the proceedings. After sitting and listening for a while, Smith stood and stepped forward, playing down into a mic with his foot on the volume pedal.

Little by little, the percussionists settled into a pounding rhythm, demarcated by both Hayward and Noble on their respective hi-hats, while Robinson embellished and accented the insistent beat with his flashing fluorescent red tipped mallets, bobbing like buoys in the murky sea of the Café Oto gloom. Both drummers worked similar veins, though Noble distinguished himself by his patented use of untethered cymbals to draw forth a rich polyphony of boings and reverberations. One of the most powerful interludes ensued after Hayward and Noble locked into a rocking 4/4, over which Smith layered echoing gnarled motifs over the top, reminiscent of trumpeter Miles Davis in his electric pomp. 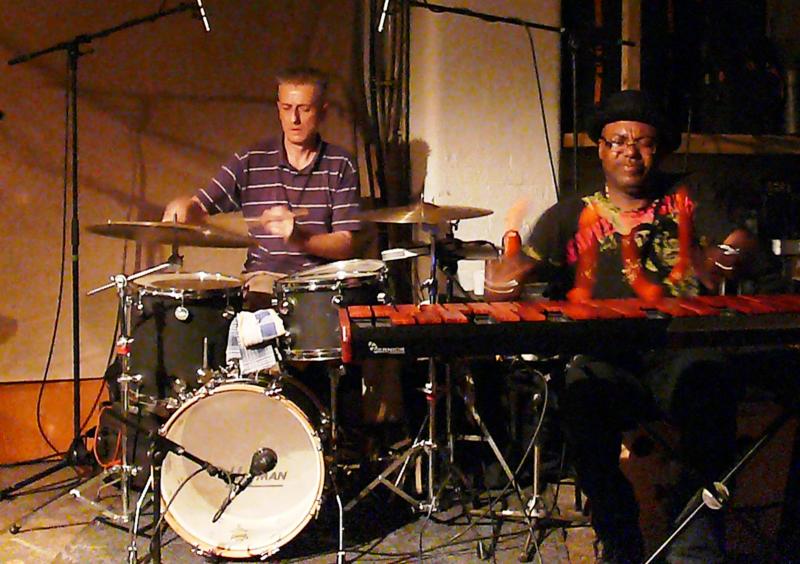 Typically demonstrating his compositional sensibility, Smith's interpolations were weighted to balance and buttress the near continuous tattoo, whether meditative mutterings or echoed fanfares. As in the first set, the trumpeter listened appreciatively for long periods, an attitude forced upon him when one of his foot pedals ceased to function. Smith gestured to the three percussionists to continue while he waited for a repair—to no avail, in spite of Coxon's assistance. Finally accepting the inevitable, the trumpeter cued up the rhythmic framework he desired and then chiseled sparse notes and unhurried dirge like phrases to bring the piece to a halt.

While not quite the resounding success of the earlier set, once again Smith found a fertile meeting of minds. Best yet, the performance will be broadcast in early November 2012, presaging Smith's appearance at the London Jazz Festival in an intriguing pairing with pianist John Tilbury.