BY JOHN KELMAN
September 12, 2012
Sign in to view read count 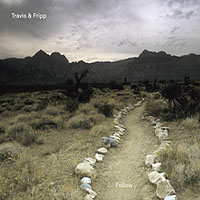 The potential of the improvising duo has been tremendously extended thanks to the seemingly limitless possibilities of technology. King Crimson co-founder/guitarist Robert Fripp has always been on the cutting edge of that technology, whether in the context of his now-deserted flagship group, on his groundbreaking duo recordings with Brian Eno or alone, with his series of "guitar as orchestra" solo recordings, first with the tape loop-driven Frippertronics, and now, for nearly the past quarter century, with his Soundscapes recordings. Saxophonist/flautist Theo Travis is no stranger to Fripp's universe, having developed his own soundscaping system called Ambitronics. The Soft Machine Legacy and, more recently, Steven Wilson alum has been working with Fripp for five years now and, based on Follow, there's been considerable growth since the duo's 2008 Panegyric debut, Thread.

Improvisation, of course, remains fundamental to this duo's MO, but with Live at Coventry Cathedral , the pair also began examining pre-existing form, even looking as far back as King Crimson's influential debut, In the Court of the Crimson King (DGM Live, 1969) and its freest of pieces, "Moonchild."

With each recording and tour, Travis & Fripp have grown from a full-on improvising unit- -one generally predisposed to the ambient side of things—to a duo looking to bring anything and everything to bear. Recorded, for the first time, with surround sound in mind—thanks to Wilson's involvement, though still wonderful in plain old stereo— Follow has plenty of the loop-driven, trance-inducing hypnotics that made Thread and Coventry so rewarding, in particular the opening triptych that opens with the transcendent "Soaring and Gliding" and leads into the more brooding "Dark Clouds." Still, the waxing and waning blend of Ambitronics and Soundscapes that form the core of "When the Rains Fall" may revolve around a constant pedal tone and gentle musings from both players, but when Fripp introduces the silkily sustained electric guitar that's been one of his signatures since 1969, it's clear that change is in the air.

It's the tracks that truly break pattern, however, that are Follow's greatest achievements, if only because they suggest a restless desire to do more than mine the same territory, lovely as it is. "Hear Our Voices" is, indeed, a painfully beautiful Travis composition; a pastoral spiritual for multi-tracked flutes and reeds that seamlessly leads into "1979" which, with Travis' Ambitronics layered over a Frippertronics recording from that year, feels like it's been waiting all these years for the right partner to come along.

But after a second triptych that moves into ever more abstract territory with the increasingly angular "Rotary Symmetrical, Follow closes with its biggest surprise. Featuring Fripp's grittiest guitar playing in years, Travis' layered horns and a relentless tambourine and foot-stomp, "So There" proves that Travis & Fripp can not only rock; it can be funky, too. Extraterrestrial riffs, take-no-prisoners light-speed strumming, an unexpectedly calm middle section and a finale where Travis matches Fripp's intensity ferocious note for ferocious note, it may be a joking middle-finger salute to those who've pegged Travis & Fripp as "too soft," but there's really only one thing left to say: rock on, guys, rock on.