CHARLES HAYWARD is known as the pioneering drummer with This Heat and Camberwell Now, an ever growing list of solo concerts and CDs (most recent release Abracadabra Information on Locus Solus label), special collaborative performances, and is in Massacre with Bill Laswell and Fred Frith. Throughout the 90’s up to the present he has initiated a bewildering array of events and performances, including the widely acclaimed series Accidents + Emergencies at the Albany Theatre, Out of Body Orchestra (too much sound, not enough space, not enough time), music made from the sound of the new Laban dance centre being built which was choreographed for the official opening, music for a circus (part of the National Theatre’s ‘Art of Regeneration’ initiative), the full-on installation/performance Anti-Clockwise (with Ashleigh Marsh and David Aylward) for multiple strobes, maze structure of diverse textures, 2 drummers, synthesizers and your nervous system

Supersonic Birmingham, England June 22-24, 2018 Running since 2003, the Supersonic festival specialises in musics that press firmly against the limits of cranial perception, whether expanding from deep inside our inner liquids, or fracturing in unexpectedly like a bolt of intrusive alien contaminate. Supersonic sounds can be minimalist and meditational, ... 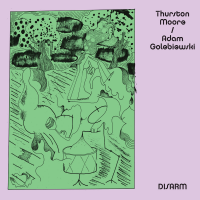 We must give credit to Thurston Moore because back in the day, at the height of his rock-n-roll superstardom, he turned post-punk fans on to improvisers like Sunny Murray, Paul Flaherty, Sun Ra, Mats Gustafsson, and Masami Akita. Nowadays, as he moves further and further away from rock, the opposite is happening. Improvisation fans listening to ...

Keiji Haino in London with Charles Hayward and John Butcher

Wadada Leo SmithCafé OtoLondonAugust 27, 2012As if searching for the perfect setting, for the second night of his two-day residency at north London's Café Oto, legendary AACM trumpeter Wadada Leo Smith was pitched against two contrasting ensembles drawn from the capital's reservoir of improvising talent. First up was a brass trio, ...