Home » Jazz Articles » Brad Mehldau Trio: Where Do You Start

Brad Mehldau Trio: Where Do You Start

By John Kelman
September 11, 2012
Sign in to view read count 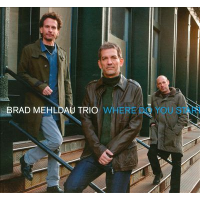 Hot on the heels of Brad Mehldau's Ode (Nonesuch, 2012)—the pianist's first all-original set with his current trio—comes Where Do You Start, culled from the same recording sessions but, with the exception of one Mehldau tune, all cover material. This isn't the first time Mehldau has split a particularly fruitful session down the same compositional line: Anything Goes (Warner Bros.) and House on Hill (Nonesuch) were both same from the same sessions, recorded with original drummer Jorge Rossy before he left the trio to return to Spain. But the two were released two years apart—the cover-song Anything in 2004 and all-original House in 2006—whereas Where Do You Start comes a mere six months after Ode.

For some, this kind of accelerated release schedule can be a problem, but if guitarist Bill Frisell has proven anything, with four albums in the space of less than thirty months—from Beautiful Dreamers (Savoy Jazz, 2010) through Floratone II (Savoy Jazz, 2012)—it's that if you've established a strong fan base, you can be more aggressive with your release schedule. Despite being literally a generation apart, Mehldau's similarly rapid ascension—since first appearing in the early 1990s, to a rarefied space occupied, in his case, by living pianists including Keith Jarrett, Chick Corea and Herbie Hancock—has been the direct result of a discography with plenty of hits and really no misses of which to speak.

Of course there's a difference when Mehldau, longtime bassist Larry Grenadier and drummer Jeff Ballard tackle cover material rather than a set of originals, although Where Do You Start's eclectic song selection—ranging from well-worn standards like saxophonist Sonny Rollins' "Airegin" (taken at a fast clip, with the familiar melody skewed ever so slightly) to Billy Roberts' near- Jungian hit for Jimi Hendrix, "Hey Joe" (surprisingly literal, even leading to the psychedelic guitar legend's familiar power riff)—provides and encourages the same flexibility and freedom as Mehldau's own writing. The sole Mehldau piece, "Jam," is really just a vamp that is tagged to the end of a gentle reading of Chico Buarque's "Samba E Amor," featuring a lengthy but wonderfully restrained solo that reaffirms the pianist is now in a place where he's nothing left to prove.

Of course, Mehldau burns aplenty elsewhere, with the kind of frightening two-hand technique that has distinguished him from so many others. His "Hey Joe" may be relatively faithful, as is "Got Me Wrong," but the Alice in Chains hit provides a chance, in his impressive opening solo, for the pianist to set a very high bar for the rest of the set. From a soft look at Sufjan Stevens' "Holland," that is as much a feature for Grenadier's spare but perfect choices, to a more straight-ahead take on trumpeter Clifford Brown's "Brownie Speaks" (but still, with Mehldau's fugue-like approach), and a particularly lyrical close with the Mandel/Bergman/Bergman title track, Where Do You Start isn't so much an alternative as it is further evidence—as if any were needed—of this tremendous trio's ability to take any material—old, new, borrowed or original—and make it firmly its own.