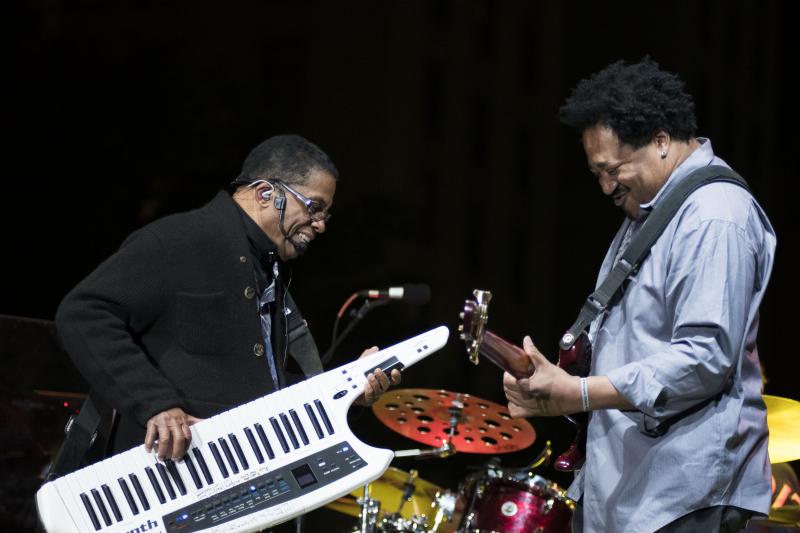 Those of us who have been following jazz music for a long time know that there are definite changes in the landscape these days that are having a major impact on the music scene. For starters, we recently have lost a large number of irreplaceable jazz greats making for a scene that is not quite as vibrant as it once was. Additionally, marketing and promotion of jazz product has taken on a brand new face and one that it not necessarily musician friendly. And yet despite it all, this music that we know and love continues to thrive and we see it not only in the profundity of the elders, but also in the yearning and seeking of the youngsters looking to find their voices.

This cross-fertilization of the old and new was more than palpable this past Labor Day weekend as North America's largest free jazz festival swooped into downtown Detroit to take over the city for the long weekend. Despite the chilly temperatures on Friday evening, the masses were in attendance Friday night for a kickoff performance that included artist-in-residence Wayne Shorter and the Herbie Hancock.

Supported by his regular ensemble featuring pianist Danilo Pérez, bassist John Patitucci, and drummer Brian Blade, the 84-year-old Shorter let his band do much of the talking. His own statements were brief, but strong nonetheless. His soprano work was especially meaningful, buoyed by Blade's irregular cymbal patterns and Perez's fluttering chords. From the side of the stage, Herbie Hancock could be seen soaking in every minute of this treasurable performance.

Offering a taste of what he'd give the crowd the next day at the festival, bassist Miles Mosley and his band played a truncated set which allowed for the major stage change needed. Namely, the house piano was replaced by a beautiful Fazioli grand that literally sparkled under the stage lighting. Hancock and his cohorts would soon follow in short order for the main event and what proved to be a highlight of the entire festival.

With top-shelf rhythm partners James Genus on bass and studio legend Vinnie Colaiuta on drums, Hancock kicked off with a freeform offering that covered a lot of ground. Fleshing out the harmonic textures and adding some spicy alto saxophone to the mix was Terrace Martin, known for such production credits as Kendrick Lamar and Stevie Wonder. "Actual Proof" featured a fleet-fingered piano solo from Hancock, despite an earlier comment that the cold temperatures were "not that good for my old fingers." It also put both Genus and Colaiuta in the spotlight for extended and dazzling displays of their musical prowess.

A tender ballad reading of "Come Running to Me" led into the iconic "Chameleon," which found Hancock bringing out his Roland keytar in order to jam side by side with both Martin and Genus. Still one of the great treasures in jazz, Hancock impressed with his facile touch and engaging storytelling.

Saturday's weather also brought with it below normal temperatures that seemed more in tune with fall than the end of summer. John Patitucci's early set over at the amphitheater featuring his Electric Guitar Quartet was a superb showcase for the dual guitars of Steve Cardenas and Adam Rogers. "Band of Brothers" hit the spot with its country twang, recalling the work of Marc Johnson's Bass Desires. A pair of Monk compositions, "Ugly Beauty" and "Four in One," were honed to perfection by Patitucci on his five and six string electric basses, supported by the animated Brian Blade.

Paying tribute to Shorter, Patitucci's own "The Watchman" painted its' distinctive vibe with broad strokes. One couldn't help but notice too how Blade's smile and exuberance recalled the late, great Billy Higgins. Rogers and Cardenas both had plenty to say in their respective moments, particularly on "I'm in Love" and the closing "Evidence," another Monk tune which Patitucci revamped with a Miles Davis funk feel circa the trumpeter's Jack Johnson period.

Later in the afternoon, up and coming trombonist Michael Dease offered a set at the Waterfront stage paying tribute to jazz heroes Curtis Fuller, J.J. Johnson, and Frank Rosolino. Dease was flanked by tenor saxophonist Sam Dillon and the front line added their own zip and vigor to a fine array of tunes associated with the aforementioned elders. Fuller's "Down Home" boasted a greasy shuffle groove propelled by drummer Keith Hall and bassist Rodney Whitaker, who took one of his typically melodic solos near the end of the number. Dease's original "Father Figure" sported a bop line that was voiced in unison by trombone and bass. It also showed up the talents of pianist Xavier Davis, a strong supporter and distinctive soloist at the same time.

Closing out the evening following Dease, west coast mainstay Billy Childs presented his singular compositions and other trinkets with the aid of a crackling quartet that contained saxophonist Dayna Stephens, bassist Hans Glawischnig and drummer Ari Hoenig. Childs as a pianist is unrivaled and his touch and taste made the Horace Silver gem "Peace" sparkle with angelic light. "Dance of Shiva" featured fast arpeggiated runs and intricate drum interjections from Hoenig, who often looked like a man possessed as he attacked his drum kit. "The Windmills of Your Mind" sounded anything but dated or sappy in Childs' hands, bountiful of collective interaction between the pianist, Glawischnig and Hoenig. Operating at full throttle, this ensemble impressed many with its flawless execution and inspired abandon. Seen after the set, drummer Hoenig was visited by Jack DeJohnette who earlier had taken the amphitheater stage with the group Hudson. It would be just one of many examples of the camaraderie that thrives at this festival.

Although further performances would be in the offing at the other stages Saturday evening, many folks opted to head off site to the Carr Center where Rodney Whitaker planned to lead a jam session in tribute to the recently deceased Geri Allen. Getting underway a bit past ten o'clock and lasting into the wee hours, this gathering would also feature drummer Terri Lyne Carrington and singer Dee Dee Bridgewater. Young musicians waited in the wings to get their chance to take the stage in a manner that has been part and parcel of jazz tradition since the beginning. Furthermore, director Oliver Ragsdale, Jr. revealed that Allen's work and legacy with the Carr Center would be carried on by Carrington and Bridgewater, news that was received with great fanfare.

Sunday's offerings included a set by Michigan native Ron English, a guitarist of great skill and taste who over the years has worked with a list of greats including Kenny Cox, Gladys Knight, and The Four Tops. Having recently reissued his underground funk classic, Fish Feet, English wisely revisited several cuts from the 70s set to the delight of the audience. A real sleeper, this set spoke to the range of talent Detroit has produced over the past several decades.

By contrast, pianist Henry Butler brought an overtly euphoric party to the Waterfront stage. His rollicking and ebullient style proved to be a crowd pleaser as he whooped and walloped vocally along with his barrelhouse piano. It came as no surprise that the Mardi Gras standard "Iko Iko" even provided the atmosphere for some dancing on the stage sidelines. Billy Preston's familiar "Will It Go Round in Circles" wrapped up Butler's set and managed to take on a completely new face thanks to Butler's ingenuity and supportive backing group.

Switching over to the main stage at Campus Martius, the New York heavyweights were out in full force for John Beasley and his big band. The Monkestra with it coy moniker would present an ambitious reworking of familiar Thelonious Monk pieces delivered up in grand style by this ensemble featuring trumpeter Brian Lynch, trombonist Conrad Herwig, saxophonist Gregory Tardy, bassist Ben Williams and drummer Terreon Gully.

The fireworks were many during a generous set, including a guest appearance by violinist Regina Carter on "Getting Sentimental Over You" and a boisterous solo from trombonist Frank Lacy on "Light Blue." Gully utilized a funky backbeat to propel "Skippy" and then unleashed a corker of a solo to boot. Both Lynch and Herwig offered textbook statements on "Evidence," a quirky number known for its inherent challenges. Beasley's own "Monk's Processional" sent the ensemble on its way sporting its elated second line stomp.

As the evening began to wind down, the options were still many. Back at the amphitheater, Wayne Shorter was heard in yet another setting, this time with pianist Leo Genovese, bassist Esperanza Spalding, and drummer Terri Lyne Carrington. For a more intimate vibe, there was the revelation of hearing Detroit native and established heavyweight Alex Harding at the Whiskey Parlor, a quaint and welcoming pub on Woodward that boasted a free cover and some incendiary music from the fire-blowing baritone saxophonist who has gigged with David Murray, Lester Bowie and the Sun Ra Arkestra.

All good things must come to an end and as the festival began to wind down on Monday, word came that strong thunderstorms were in the offing and doubts started to surface as to just how soon things might have to shut down for safety reasons. Over at the Pyramid stage, jazz bon vivant Johnny O'Neal would return to a hometown audience flanked by two youngsters who proved unusually adept at supporting their boss. Bassist Ben Rubens and drummer Itay Morchi helped O'Neal serve up a rich set of numbers that verified how lucky we are to have the pianist and singer back on the scene.

The Anita Baker number "Sweet Love" started the set with a perky shuffle that quickly contrasted with a lush ballad statement on Ellington's "It's Monday Everyday." With witty banter and strong vocal statements, O'Neal dazzled the crowd and often would pantomime block chords in the air when his solo reached a fever pitch. Stevie Wonder's "Creepin'" and the soul classic "People Make the World Go Round" were crowd pleasers for sure, but a bawdy rendition of "I'm Your Mailman" brought the house down and eventually led to an obligatory encore.

Always one to reinvent himself through the disparate projects that he leads, bassist Robert Hurst's latest ensemble takes on an electric guise and is aptly named Black Current Jam. Featuring Detroit's own Ian Finkelstein, a former student of Geri Allen's and a gifted pianist worthy of further attention, Hurst and the band kicked off with "Feed the Fire" in homage to Geri Allen. Later in the set, Finkelstein delivered a solo version of "Kid Charlemagne" in honor of Walter Becker who had just passed the day before. Hurst himself made a strong statement when he referred to the fact that most of the tunes in the set were in the key of F and as such were dedicated to Donald Trump.