His father was a teacher who had played guitar with Illinois Jacquet, Eddie Cleanhead Vinson, and Arnett Cobb; his mother sang gospel music.[1] He played piano from age eight, and played trumpet, euphonium, and tuba before settling on trombone at age 16.[citation needed] 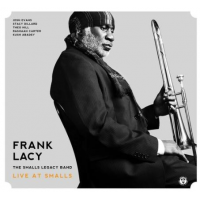 All About Jazz musician pages are maintained by musicians, publicists and trusted members like you. Interested? Tell us why you would like to improve the Frank Lacy musician page.