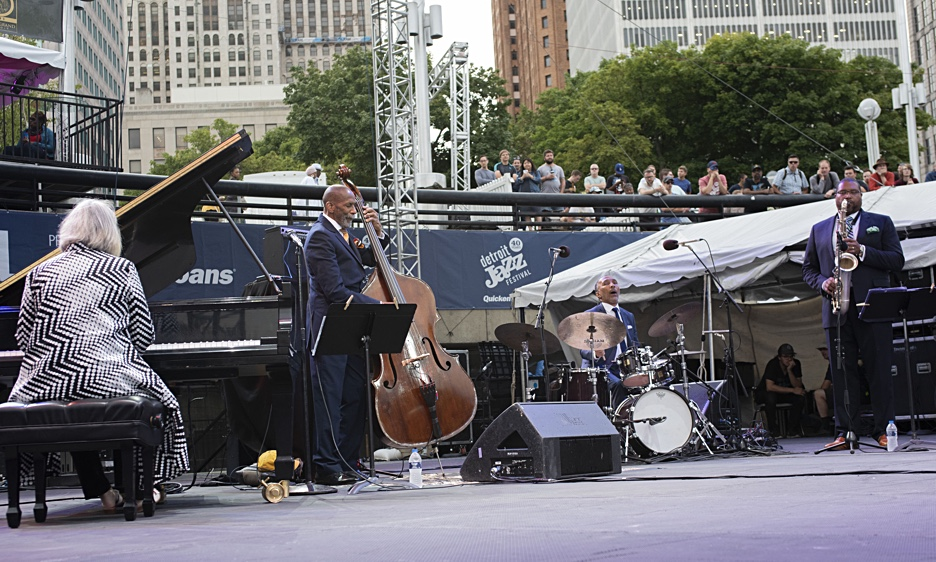 According to the official count, the 40th edition of the largest free jazz festival in North America drew a record crowd numbering some 325,000. Boasting four stages as part of the festival footprint, there seemed to be a reduction in the total number of performances this year. Furthermore, even a cursory look at the schedule revealed more than a fair share of names that would be unfamiliar to all but the most dedicated jazz follower. As the festival embraced a theme to invite former artists-in-residence back for the anniversary celebration, they also leaned on booking more obscure acts. In the end, what should have been a commemorative event seemed somewhat less enticing than lineups from previous years.

Friday night's offerings at the rather cramped Campus Martius site included performances by pianist Danilo Pérez and this year's artist-in residence, Stanley Clarke. Having already been part of previous opening night gambits with his own group and as part of Wayne Shorter's ensemble, Perez would feature his multicultural ensemble and his original works, which struck a fusion steeped in classical forms as much as they were in the jazz diaspora. Clarke's band of youngsters would breathe new life into the bassist's music, particularly the talents of tabla player Salar Nader and violinist Evan Garr.

Saturday's events at the amphitheater were of the quality that one could easily stay camped at that one spot for the duration. Drummer Ali Jackson and his sextet started their set with the first of many nods to the centennial celebration of Art Blakey's birth. An incendiary "Arabia" also introduced the singular talents of trumpeter Alfonso Horne, whose style was a combination of the burnished tone of Woody Shaw mixed with the ebullience of Lee Morgan. Pianist Dan Nimmer shared his own individualistic muse which was marked by a grand sense of drama in the building of his solos.

One of the most recorded jazz bassists in history and a graduate of Detroit's Cass Technical High School, Ron Carter was ubiquitous throughout the festival. His own set featuring pianist Renee Rosnes, tenor saxophonist Jimmy Greene, and drummer Payton Crossley was a stellar example of the continued validity of swing-based jazz. Obviously a deep-seated part of his past, Carter's ties to Miles Davis were hinted at during a medley that first started with "Seven Steps to Heaven" and later morphed into "Blue in Green." During the latter piece, Carter's mercurial solo included a sly quote of "You Are My Sunshine."

As the homage continued, Carter would next launch into a earnest "My Funny Valentine" and it was obvious that he was enjoying himself immensely. Confirmation of this would come from Carter himself when he later quipped, "This is a wonderful place to be. I was here two years ago and it felt just as wonderful as it does right now." Not to be outshined by their boss, Rosnes and Greene waxed melodic and thoughtful throughout the set as well, supported by the musical drumming of Crossley.

Bringing the evening to a close, Joe Lovano featured his star-studded nonet with a wide-ranging and challenging set that engaged the overflow crowd for the duration. Bassist Cameron Brown was the glue that held things together. Front line ringers included Steve Slagle on alto and flute, Ralph Lalama on tenor, and baritone legend Gary Smulyan. Alongside the many Lovano originals, a gorgeous reading of Tadd Dameron's "If You Could See Me Now" was a highlight of the set.

One of the most talked about presentations during the 2017 festival was a duo recital featuring Ron Carter and Pat Metheny. Placed on the smaller Pyramid stage, the situation quickly became one of standing-room-only status, with throngs turned away due to lack of space. This time out, the pair played an early set at the Amphitheater on Sunday and the chemistry between these two artists was immediately made palpable.

The breezy and comfortable temperatures of the day perfectly accompanied a sunny take of Bonfa's "Manha de Carnaval" as the duo took the stage. With jazz standards as their fodder, Metheny typically led the way with lead lines and solos that concluded with Carter's own significant statements. On the bassist's "Eighty One," Metheny cast a Midwestern vibe that recalled his memorable work with Charlie Haden. An animated romp through "St. Thomas" would not satiate the crowd, leading to an encore performance of "Autumn Leaves" taken at a healthy clip.

As the six o'clock hour approached on Sunday, one had to make tough decisions based on their stylistic preferences. Simultaneous shows took place with Kenny Garrett at the Amphitheater, Stanley Clarke at Campus Martius, and John Pizzarelli over at the Pyramid stage. Opting for the last choice, a smaller crowd was nonetheless treated to a charming set by Pizzarelli and his trio featuring bassist Mike Karn and pianist Konrad Paszkudzki.

With the adept timing and personality of a stand-up comedian, Pizzarelli was as enthralling with his between-the-song banter as he was with his playing and singing. Telling the stories associated with many of the songs heard on his latest album celebrating Nat King Cole, Pizzarelli offered his own choice takes on familiar trinkets like "Straighten Up and Fly Right" and "Sweet Lorraine." However it was the less familiar gems that really spoke volumes, like a medley of vintage tunes about food. Both Karn and Paszkudzki were given their own time in the spotlight and proved to be accomplished soloists of a similar cloth.

Part of the Mack Avenue Records roster, the anticipation was high for the debut of West Coast pianist Connie Han and she did not disappoint. Han has gone on record stating that her main influences include folks such as McCoy Tyner and Mulgrew Miller. And while some elements of those artists can be heard in her stylistic voice, what is remarkable is how much Han has sublimated them into a molding of her own individualistic voice.

With bassist Ivan Taylor and drummer Bill Wysaske on board, Han delivered a mix of music from her Mack Avenue debut and numbers from her forthcoming sophomore set. Serving as music director as well as drummer, Wysaske's arrangements were an integral part of the success of the performances. His original "Captain's Song" was also a highlight of the set, marked by a musical approach to drumming that added layers of complexity beyond the mere keeping of time.

Introducing Mulgrew Miller's "The Sequel," Han commented on how the late pianist's music enticed her to commit her full energies to jazz. Again, Han impressed with her advanced concept of the trio format. Moving to Fender Rhodes, she was no less engaging on the originals "Gruvy" and "Southern Rebellion." Proof that Han had won over her audience, a long line of fans waited patiently to meet her and sign autographs after the show.

Back to the Amphitheater, Sunday night's schedule wrapped up with trumpeter Terence Blanchard's Art Blakey Project. Wayne Shorter's "Ugetsu" kicked off the set in jovial style. The ensemble mix featured some younger talents with the likes of pianist Benny Green and tenor saxophonist Billy Pierce being the obvious ringers. Drummer Oscar Seaton spoke with his own voice, avoiding any of the obvious Blakey licks for better or worse.

Trying a bit too hard to travel a new path on familiar ground, bassist David Kenyon's arrangements of Blakey standbys "One By One" and "Dat Dere" seemed oddly indecisive even as Green and Pierce delivered some of the most fiery solo moments of the entire festival. As the focus shifted to Blanchard's own material, the momentum created at the start of the set began to wane. Pierce would leave the stage and the addition of more electronic elements lead to a stagnating, if slightly mesmerizing, end to the show.

Monday's offerings were limited by a rain delay in the afternoon, but the pick of the lot was Metheny's Side Eye project presented at Campus Martius. Keyboard man James Fancies literally held down the fort, providing both bass lines and his own complex statements. Drummer Marcus Gilmore added further textures on a range of choice Metheny material, although offering a less organic approach than his predecessor in this group, Nate Smith.