Drummer—composer—arranger—educator, Bill’s list of credits include Michael Bublé, David Foster, Count Basie Orchestra, Christian McBride, Steve Tyrell, Hollywood Bowl Orchestra, John Clayton, The Tonight Show, Ellen Degeneres, Randy Brecker, John Beasley and many more. He spent his youth in Seattle Washington and later finished his education at The University of North Texas in Denton. Soon after, he was accepted into the prestigious Henry Mancini Institute prompting his move to Southern California and it was in Los Angeles where his career blossomed. With his broad Jazz pedigree, Bill made his name working with both large and small ensembles locally and abroad

If, when first pressing play on Connie Han's charismatic Secrets of Inanna, you think you have stumbled upon a previously unheard Chick Corea tune with Hubert Laws at its heart and soul, it is okay, calm down, relax. It is just pianist Han (with the help of soulful alto flute and piccolo by Katisse Buckingham ) ...

At the 2019 Detroit Jazz Festival, pianist Connie Han dazzled the crowd with a superb and well-paced set which was one of the best performances of the weekend. Although her Mack Avenue debut, Crime Zone, had hit the streets in 2018, Han's musical acumen was still hovering below the radar of most jazz listeners. The key ...

A decisively brazen talent, pianist Connie Han rushes into the fire touched off by her 2018 Mack Avenue debut Crime Zone, bringing more accelerant to bear on Iron Starlet.With an exhilarating control of her skills and vision and an intimate clairvoyance into all that has come before her, Han bids trumpeter Jeremy Pelt the ...

Detroit Jazz Festival Hart Plaza Detroit, Michigan August 30-September 2, 2019 According to the official count, the 40th edition of the largest free jazz festival in North America drew a record crowd numbering some 325,000. Boasting four stages as part of the festival footprint, there seemed to be a reduction in ... 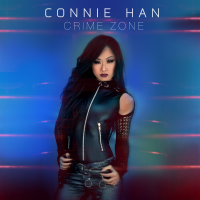 Twenty-two year old pianist Connie Han comes at you flashy, fast, and furious on her Mack Avenue debut Crime Zone. But it's flashy and fast with more than enough sense of history and creative curiosity to keep your ear pinned to whatever device you're listening on. “Another Kind of Right" jumps from the start ...

Rising Stars: The Beginning of the Han Dynasty

As I write this, there is a government shutdown in effect due to a budget impasse. What that means to you, kids, is that I am free to do whatever the hell I want without the constrictive Federal Jazz Commission telling me what is and isn't appropriate material for this column. If I wanted to write ...