By Ian Patterson
September 13, 2019
Sign in to view read count 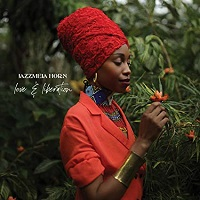 It's a big step for any singer, the move from interpreter of jazz standards to songwriter. And when you've been Grammy-nominated for a debut album of covers, as Jazzmeia Horn was with A Social Call (Prestige, 2017), the temptation must be to carry on in the same vein. Horn, however, clearly has greater ambition, as the eight originals on her follow-up attest. Not that she's thrown the baby out with the bathwater, for swing, blues, bebop, gospel and thrilling vocal improvisation are still very much at the heart of her craft.

The lively opener, "Free Your Mind," sees Horn deliver a vocal masterclass over Ben Williams, Jamison Ross and Victor Gould's driving rhythms. Clear articulation at speed, swinging rhythm and an impressive vocal range are attributes aplenty, but add Horn's thrilling scat singing into the bargain and the result is little short of breath-taking. It's no exaggeration to say that, at times, Horn's fluency and inventiveness evoke Ella Fitzgerald in her pomp. Josh Evans lends a terrific trumpet solo here, while his vamp accompanies Horn through her exhilarating vocal flight.

Evans' muted trumpet provides an atmospheric backdrop on "Time," a spoken-word poem that could almost have come from Van Morrison's mystic pen. Another poem, "Only You," sees Horn dovetail with Ross in an ode to love. These vignettes provide, in a way, Horn's most personal lyrics, though the real meat and drink lies in the up-tempo jazz of the old school, such as the finger-snapping, Tin Pan Alley-esque "Out The Window," where Horn's breathless scatting brings to mind Dizzy Gillespie's horn as much as Fitzgerald vocal attack.

Dallas-born Horn pays tribute to another famous Texan on an irresistible version of Hubert Laws' anthemic "No More." Horn's gospel roots shines through in a powerful performance, complete with vocal call and response, that conjures the spirit of Aretha Franklin. Horn is in more subdued mood on the self-penned ballad "Legs and Arms"—which features fine playing from tenor saxophonist Stacy Dillard—and George Duke/Rachelle Ferrell's "Reflections of My Heart." The former, which almost inevitably has a more personal feel, is arguably the more satisfying of the brace.

Horn pulls out all the scatting stops on the swinging "When I Say," and on the boppish "Searchin,'" embraces the blues on the bar-room tale of seduction that is "Still Tryin,'" and finishes on a swinging high with the Jimmy Van Heusen/Johnny Mercer standard "I Thought About You." On the latter, an intimate, duet with Williams, Horn hits some piercing high notes, but it's the playful jousting between singer and bassist that most captivates.

A fine outing from a formidable singer, much of the album's appeal lies in Horn's wonderfully intuitive improvising and heartfelt phrasing. Horn's writing is perhaps a little constrained by the idiom that defines her a singer, but it's early days. Love and Liberation is likely to stand among the finest vocal albums of the year.

Free Your Mind; Time; Out the Window; No More; When I Say; Legs and Arms; Searchin’; Green Eyes; Still Tryin’; Only You; Reflections of My Heart; I Thought About You.